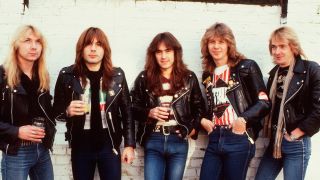 With 36 years of hit singles and albums, Iron Maiden have accumulated one of the most celebrated catalogues in music. Even your great grandmother probably knows Run To The Hills, The Trooper and The Number Of The Beast, but which delights lie hidden in the deepest darkest crevices of those 16 albums? Join us for a journey into the underbelly of the beast.

Remember the days when Maiden were seen as a metal-punk hybrid? Recorded with a slight boogie flavour on The Soundhouse and then heavied-up as the flipside of the Women In Uniform single, this spiky-topped two-and-a-half minute paean to the raping and pillaging exploits of the Vikings reminds us why. Paul Di’Anno sneers brilliantly and the instrumental backing is red hot; right in your face.

Maiden’s poignant tribute to those thousands that lost their lives during the Normandy Landings of D-Day, 6 June 1944, channels the cloying fear of the combatants (‘Oh, the water is red/With the blood of the dead/But I’m still alive, pray to God I survive’) via a soundtrack that builds into something appropriately explosive.

In many ways it’s slightly unfair that Bruce’s 18-minute epic Empire Of The Clouds has become so established as the main talking point of The Book Of Souls album. The only-slightly-less-epic title track is textbook latterday Maiden, from a scene-setting intro to the intricate webs spun by those Three Amigos, Gers, Dave Murray and Adrian Smith.

Actions needed to speak louder than words when Bruce Dickinson and Adrian Smith returned to Iron Maiden. The result was one of their most consistently strong releases – Brave New World. Lord alone knows why this stellar song was tucked away at the end, unless the band knew it would leave the listener reeling, reaching again for the button marked ‘play’.

Squirreled away on the Powerslave’s original second side, and overshadowed by both the title track and the sprawling Rime Of The Ancient Mariner, Back In The Village is Maiden at their frenetic best. Five minutes of tightly wound intensity, with Dickinson bawling out lyrics like ‘Shellshock in the kitchen’ over a souped-up chicken-scratch riff. Glorious stuff.

This often overlooked non-album B-side of Run To The Hills should really have been on The Number Of The Beast, in place of that album’s only Achilles heel, Gangland. The band would later admit the mistake, having been rushed into recording and mixing Run To The Hills, and of course in the CD era …Eclipse was added to the overall package.

The Flight Of Icarus and The Trooper hog the attention when it comes to Maiden’s fourth album, Piece Of Mind, and yet in a parallel universe this rollockin’, slickly despatched anthem, inspired by the 17th century Japanese swordsman and rōnin Miyamoto Musashi, could easily have been a sizeable hit single.

Considering the extravagance and musical development that would follow in later years, the B-side of the single Running Free shows Maiden and their Di’Anno-fronted days in a more simplistic light. Yet its innocence is charming, the delicate guitar melody at its epicentre a throwback to composer Steve Harris’ well-documented admiration for Wishbone Ash.

Another unsung Powerslave highlight, and another song about sword-fighting - the perfect subject matter for Bruce Dickinson, a keen enthusiast of the sport, who begins this distant cousin of Sun And Steel by singing of ‘chasing dragons’ as small boy armed with a weapon made from wood and heads into a rather more life-threatening scenario. The triumphant musical backing is well suited to its theme: ‘One man, and his honour.’

In one of the more perverse decisions of their career, not only did Maiden choose to close the Seventh Son Of A Seventh Son album with this rampantly commercial tune, they didn’t even bother to release it as a single. Where much of Seventh Son is epic and complex, Only The Good Die Young is more direct: stirring, soaring and in possession of a hell of a chorus. This stands shoulder to shoulder with their best-known songs.