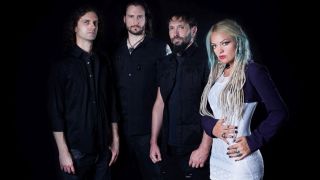 Melodic death metal, or melodeath, emerged in the early 90s, most notably in Gothenberg, Sweden with bands like At The Gates and In Flames. Since then, the genre has expanded to every corner of the world, and birthed many further subgenres like blackened melodeath and melodic metalcore.

Italian metallers 5RAND incorporate alternative, thrash and of course, melodeath elements into their unique brand of metal – the latter of which is particularly apparent through Julia Elenoir's mixture of clean and guttural vocals.

“Melodic death metal is certainly one of our favourite genres to listen to," the band explain.

So to celebrate the release of their second album Dark Mother back in September we asked them to pick out the melodeath albums that helped to shape their own songwriting.

Almost all of their picks are from Sweden, "but you’ll see that they’re not your typical Swedish old school death metal: there’s a strong emphasis on the melody and complexity in the albums we chose, because we wanted to point out the records that drove us to the genre in the first place."

So, in chronological order, here are the band's top 10 melodic death metal records.

“This is likely the first completely successful attempt from an extreme band, like Carcass, to merge ferocity and melody without losing its crude energy and coherence. Carcass reinvented themselves stepping up to a whole new level with Heartwork. It might be said that it’s the record that started it all, in fact. This innovative approach along with the musical prowess of the band are the ingredients for a milestone.”

“An injection of pure evil and power from the beginning to the end, with that bit of industrial vibe so typically At the Gates that makes this record still so very modern, even now. Haunting arpeggios, powerful riffs, perfectly nestled drumming and Lindberg’s raw vocals singing such deep, meaningful lyrics. In addition to all of that, the melancholy of Into the Dead Sky is such a cherry on top.

It’s truly a shame that At the Gates disbanded shortly after, but we couldn’t be any happier when they reformed a few years ago.”

“Probably our absolute favourite from the lot, The Gallery is a masterpiece through-and-through. The musicianship on this album is truly amazing. Melodies are all over the place within the songs, not confined just to choruses and solos like you’d normally expect, and they intertwine beautifully with the rhythmic sections and the strong riffs so characteristic of the genre. The bass parts are also worth mentioning because of how cleverly written and played they are, which is sadly not common at all in many bands. It’s astonishing for Dark Tranquillity to display such musical maturity on an early record.”

“Obviously this one couldn’t be left out of the list. To some extent it’s the opposite of At the Gates’ Slaughter of the Soul because of its average slower songs with refined and elegant arpeggios, in some cases reminiscent of medieval music. It’s still death metal by every canon, Friden’s voice is as growling as it gets, but a marvellous bittersweet dreamy mood permeates the whole record, making it extremely suggestive and totally unforgettable.”

“Projector is the turning point in Dark Tranquillity’s discography. Many didn’t (and still don’t) like their new approach and the introduction of clean vocals. We, on  the other hand, think that they’ve enriched their expressive repertoire and have definitely found their own dimension with this album. Certainly a lot of songs are slower and mellower than their back catalogue, but nonetheless beautiful in different ways. They’ve fully developed their features, foreseeable since The Gallery.”

“We get this comparison a lot, mainly because of the female growling singer, but in any case Arch Enemy has to be on our list. It’s undeniable that the band with Gossow made a sensible shift from the first records, and we think for the better. We love the industrial noises in Doomsday Machine and it includes some of the band’s anthems, like Nemesis, and I am Legend/Out for Blood is one of the most underrated songs ever, about the novel I am Legend by Richard Matheson: you just have to love it!”

“Insomnium is not the classic band you’d expect in a similar list: they’re not from the first wave of melodeath bands, and yet they’re with merit one of the biggest acts of the genre right now. Above the Weeping World can be considered their coming-of-age record, with its strong roots in melodic death metal and some elements from doom, giving birth to a very fascinating and entertaining mixture that has been very popular in the last 15 years and doesn’t seem to be waning anytime soon.”

Amorphis has always been a very talented band, but with Joutsen’s voice they’ve only got better: he’s probably one of the best and most complete singers out there and has brought the band a new life. We really like their way to unite power metal with amazing 70s-like keyboards and melodic death metal. The lyrical choice is also very interesting, being inspired by Finnish poems and mythology (notably the Kalevala), like other Amorphis’ works.

Amon Amarth reached their commercial breakthrough with this record. Again, the purists will say that the band has abandoned true metal or whatever, but it’s undeniable that Twilight of the Thunder God is atrociously good under every single point of view. The combination of simple, yet incredibly effective riffs with melody takes you on a longboat along with the Vikings and Hegg’s voice roars just like the hammer of Thor striking the anvil! So epic!