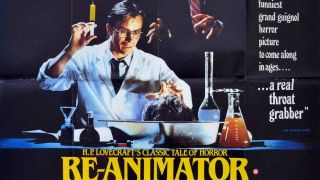 Since their formation in 2015, Georgia heavy metal powerhouse Irist have gone from strength to strength.

Channeling an eclectic variety of influences from the muddy likes of Alice in Chains, The Melvins and Soundgarden to technical metalcore of Converge and The Dillinger Escape Plan into their hard hitting sound, the fivesome have created something that's truly unique – and somewhat resembles a melodic marriage of Will Haven and High On Fire.

With the band having just launched their Nuclear Blast debut Order of the Mind , and with all of us stuck firmly on lockdown, we asked the lads to pick their favourite isolation-heavy sci-fi flicks.

For a psychological sci-fi thriller, Ex-Machina is actually a heart wrencher. You'll find yourself emotionally engaged in the story, only in a way that will later make you sick.

The practical effects in Total Recall were so well done, especially watching as a kid, that you can watch it 30 years later and it somehow still holds up. That and Kuato is an unforgettable character.

Another powerhouse of practical effects, T2 (as well as the original) left its mark on our generation.  The iconic line "come with me if you want to live" will forever be engrained in our heads, as well as the thumbs up scene. T-1000 is also one of the best made, scariest villains to ever grace the screen.

We really like Re-animator for its dark yet funny screenplay. The movie understands how to make fun of itself, which is why it has become such a classic.

A pioneer in the extraterrestrial abduction genre, this movie gives you a slow and well crafted story before hitting you with the "money shot".  The abduction scenes are absolutely terrifying and it being a biopic made it one that surely impacted many Gen-X and early millenials.

I would imagine most musicians of a certain age can almost 100% remember the chord sequence near the end of the movie. Though not practical, the special effects on this one still hold up today.  The abductions/encounters, and obsession the main character is imbued with, make it an intense ride from beginning to end.

Pretty much the only light hearted flick in the bunch. The punch lines, characters, fight choreographies, music, and makeup/effects in this movie are all so well crafted that it makes you able to watch it over and over to the point that you are reciting half the lines in it.

The lack of CGI makes the dark dystopian future created by Ridley Scott feel real and visceral. All the subtleties and nuances in the movie make it highly re-watchable as well.

A super dark back to the future. 12 Monkeys threw in time travel, psych thriller, and pandemic (ironic at the moment) into a finely written plot with amazing actors to execute it. The newer show based off the movie is also a good watch.