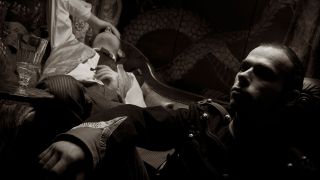 The band explain: "'The Basilisk is a mythological being with the appearance of an iguana. The animal was called the 'king of all snakes' and represented Mephistopheles who seduced Eva. This is an epic track about classic heavy metal themes: Heaven and Hell, Genesis and The fall of Man."

We caught up with the "decadent dark" artists and tasked them to list their top 10 songs by a band who had a significant influence on their sound and style.

Porta Nigra picked fellow Germans Bethlehem, explaining that the band offer a "rollercoaster-ride through the most eccentric and eclectic musical expressions that will leave no-one with a heart emotionally untouched," arguing that the German extremists have "done more for the use of the German language than any other band in the distinct metal genre".

As well as influencing Porta Nigra on a musical level, Bethlehem's use of the German language encouraged them to use their native tongue lyrically too. "Everybody can express himself better in the language he grew up," the band explain. "German is a very rich and powerful speech that should (and does) work perfectly fine within a metal context."

"Dark Metal over the years massively grew on me. While I first regarded it as an 'OK' doom metal album it took me years to understand the massive power it holds. I would argue that it is maybe the darkest effort of the band to date. And while not as aggressive, weird or experimental as later records, it laid a solid foundation.

"I have chosen this track, because the 'outro' part starting at 7:30 is not only one of the saddest and emotional things I have ever heard someone doing with a guitar (as simple as it is), it's also, with its clean simplistic notes, a first indication of the future signature sound that would make this band legendary."

"After the departure of vocalist Landfermann, Bethlehem made it clear that they are not up to playing anything safe with their third LP. Sardonischer Untergang im Zeichen irreligiöser Darbietung showed off the bands will to experiment and leave the overly used paths of black and dark metal behind.

"The record is pretty fragmented with open word passages and overly long soundtrack-like sections which I find wonderful. Anyhow I have chosen this track, because it has a compelling flow to it. Especially on the guitars. I guess we owe this masterpiece to the guitarist back then, Klaus Matton."

If S.U.I.Z.I.D. was already a hard pill to swallow for some more conservative fans, Schatten aus der Alexanderwelt was nothing less than a shock. A clear, powerful production, crafted by the very talented Markus Stock, as well as the introduction of the new vocalist Guido Meyer de Voltaire and a sound leaning towards pop and rock music might have been too much for some of the die hard fans.

"However, this record today is regarded a classic and marked a new chapter in the history of Bethlehem. Maschinensohn is a dark, twisted, expressionistic and compelling piece of metal art that only these wacky Germans can pull off."

"Don't know how they did it, don't know what is going on. They made a heavy metal classic purely their own. At times you have the feeling they play the music backwards.

"It's just pure insanity and integrity at the same time. Listen to it before you think you can pull off a cover next time."

"When I listened to this song the first time I had the longest lasting goosebumps in my life. Even though the lyrics, especially on this album, are mind-blowing cryptic, I had the feeling they spoke to me like nothing I have ever read before.

"Combined with the powerful and at times also very relaxing songwriting of Mr. Eckhardt, this track represents a strong example of the impact 'later' Bethlehem can have."

"A very strong opener with all members at its best. The track's appeal for me is its simplicity, the strong chorus as well as the fantastic bass-lines by Mr. Bartsch. Without frills, self-assured and beautiful."

"A track that could be used to seduce your girlfriend to have a romantic hanky-panky if there would not be that ugly and disturbing industrial section including a sample from 'The Shining'.

"And oh poor non-German-speakers, you will never catch the beauty and craziness of these lyrics, that belong to the whole package. Without the poetry it's impossible to really get this band.

"Dictius Te Necare is probably the most famous record of Bethlehem and rightly so. I don't want to know how many fanatics of our generation have been inspired to cut their skin while listening to this truly unholy piece of dark metal.

"I resist the disgraceful attempt to describe it. I could have chosen any song from this masterpiece but went with this one cause of the ending."

"Here we have everything that makes this band great. A slightly better sound then on Dictius Te Necare. Their most insane vocalist in his prime.