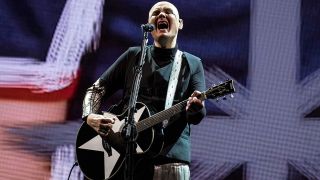 When we spoke to Billy Corgan last year, a sense of lingering nostalgia was weighing heavy on his mind. Having temporarily turned his back on the Pumpkins as a touring, recording proposition – focussing instead on his own solo work – he was clearly missing life in a band. Specifically, his real band. As conversation turned towards Siamese Dream's 25th anniversary, Corgan admitted he was keen to get the band's classic line-up back together for a "celebration" of their 90s iteration, to bring the band closure and offer a chance for fans old and new to relive the magic of the band's glory days.

Well, with The Shiny And Oh So Bright reunion tour, that's what he's done – sort of. With the conspicuous absence of classic-era bassist D'arcy Wretkzy aside (we covered our thoughts on that one in depth earlier this year), for those of us who hit our angsty teenage stride around the mid 90s, tonight's setlist is a dream. Having kicked off in Arizona this July, the Pumpkins – almost complete with original guitarist James Iha and drummer Jimmy Chamberlin – embarked on the tour's European leg with their only UK date at London's Wembley Arena last night. As promised, they brought with them a slew of hits – 31 of them, to be precise – the majority taken from 1993's seminal alt-rock classic, Siamese Dream, and its 1995 follow-up, Mellon Collie And The Infinite Sadness.

An animated video plays over the Mellon Collie intro, in which each landmark of the band's iconic artwork is brought to life. In response, the arena is flooded with gleeful, noisy nostalgia. A stripped back performance of Disarm – complete with audience singalong, obviously – is followed by fan favourites from Gish and Siamese Dream, before stomping renditions of Zero, The Everlasting Gaze and Cherub Rock whip the crowd into a thrumming, fist-pumping frenzy. Mercifully, even with a new album to promote, new material is kept solely to the live debut of single Silvery Sometimes (Ghosts) slipped into the encore.

But along with these hits comes a series of vaguely mind-bending covers. As Corgan mounts a bridge-cum-podium erected in the middle of the stage, dressed in a shiny, hooded space cape for his rendition of David Bowie's Space Oddity, replete with robotic dance moves, it's the kind of performance you might call esoteric if you're being polite – and downright bananas if you're not. Their cover of Stairway To Heaven – yep, you heard us right – is made all the more unnerving by the huge, fairy light-clad Virgin Mary icon statue floating around the crowd as the band perform. Truly bizarre, more than a little silly, but typically Corgan.

Then there's the outfits. We go from relatively standard kilted skirt, to shiny spaceman, to a metallic cowboy hat with cat ears (he's playing a massive piano in the sky at this point), to skeleton, to vaudeville villain meets Matrix hero, to finally, what we can only assume is some sort of Pope outfit. It's an exhaustive tour of Corgan's wardrobe, and one that enhances the general sense of whimsical fun the evening's revolved around.

The tour continues in Italy this week, before heading back to the States. If you're heading to a show, this is what you're in for.