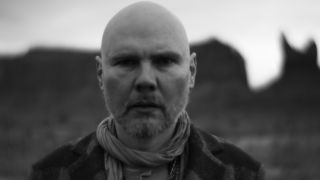 Billy Corgan is a complicated character. Having shot to proper, all-consuming, celebrity-love-spats-and-paparazzi-in-your-bushes fame with the Smashing Pumpkins in the mid 90s, by the time the end of the century rolled around the band had imploded under a creaking canopy of overwork, over-ambition, exhaustion, infighting and paranoia. Rumours depicting Corgan as variously difficult, power-hungry and egotistical gained him a reputation as one of the music biz’s tricker customers. But when he greets TeamRock in the plush basement of a West London hotel to discuss his new album Ogilala, Corgan is warm, thoughtful, and a self-professed “Chatty Cathy”. Were the rumours all bluster, or could this be the dawn of a new chapter for William Patrick Corgan?

When the Smashing Pumpkins split – officially in 2000, but having already shed two original members by that point – Corgan was left depressed, demoralised and deeply suspicious of the media, as lurid portraits of him and his private life made their way through music mags and tabloids. Corgan retreated inside himself and his music, he admits, suffered – until now. Cut to present day and Corgan’s new album, Ogilala – which is released under the all-new moniker of his full name – is stuffed full of the soft, sweet and lush sounds which made Siamese Dream and Pisces Iscariot such irresistible propositions – plus a healthy smattering of the robust piano of the Mellon Collie era – and represents the closest approximation to the classic Pumpkins sound we’ve heard for years.

“Sometimes people will say something to you [and] when they say it, it’s so obvious, but it hasn’t been obvious to you until they said it,” says Corgan as we offer the comparison. “A guy the other day said something similar. The way he said it was, ‘there’s a sweetness in this that I haven’t heard from you for a long time, [that] I was missing in the recent years’. And it was the first time that I thought, ‘you know, he’s right.’ If you’d asked me before that observation I would [have thought] ‘Oh, no, that’s there’, but it’s true. I used to do a lot of music like this and somewhere along the way it got harsher, more closed off, which is surprising, because it wasn’t conscious at all.”

“Between 1999 and 2015, I just was not able to go there, which is weird,” he continues. “Because that’s a long fucking time, if you look at it like that. For me, that’s a traumatised person. I’m not asking for sympathy, it’s just an observation. That’s what you do when you’re traumatised, you turn into a survival personality. Vulnerability requires a person who’s willing to die for what they believe in, and that’s not easy. If I’m willing to be vulnerable, I’m willing to put that side out there. If I’m not, I turn into the other guy, and the other guy, unfortunately, is not as agreeable.”

The similarities with Corgan’s earlier writing become all the more intriguing when you learn this album is, in a roundabout way, the product of a failed Smashing Pumpkins album – one he started writing and, for the first time ever, abandoned half-way through, as his depression took hold and he began to yearn for the energy he and his bandmates had shared in the Pumpkins’ early days.

“I was working on a Pumpkins album which I abandoned,” says Corgan. “I got depressed, bummed around [and] started working on an unspecified group of songs with the idea that I needed to write a song that I liked, and if I didn’t, I was going get out of the business for a while, because I was losing my mind. I wrote a group of songs, travelled around America for a while, had a laugh, [and actually] liked what I was doing.”

This is where the story takes an even stranger turn. Corgan decided the songs were to be an album, and that that album needed a producer. Enter… Rick Rubin? “I called Rick, who’s been a friend for a long time, and said ‘can you suggest somebody who might be a good person to do this? I think I want to do a solo record’. He said, ‘Well, what is it you want to do?’ I explained the music, and he said ‘I’m interested in that’. And I literally looked at the phone like – did he just say that? Totally unexpected. So I sent him the songs, and he called me back and he said ‘This is really good. Write some more songs – you’re onto something.’ So I wrote another group of songs and he loved every song, which blew my mind, because it meant that instinctually I was on some sort of trajectory.”

Rubin, known primarily for his work producing bands such as Slipknot and Metallica, might not seem the obvious choice for a project like this. But Corgan maintains that their collaboration made the album something it couldn’t have been otherwise. “I basically said [to Rick], whatever you want to do – you lead the process. You obviously hear something bigger than I’m hearing. Rick got me into that space where I allowed myself to relax and just concentrate. Something shifted where I just let the sunshine in enough to just be lead by the process, and thankfully the result is positive.”

While fans of Corgan’s more vintage sounds may be pleased with the new album, those who are newer to Corgan’s work may struggle to make sense of it and its place in his recent oeuvre. But, says Corgan, to try to make sense of Ogilala purely within the linear construct of Corgan’s career, is to misunderstand the album’s real story. “Part of the story that’s kind of confusing is I did an acoustic album in 2004 that never came out, that’s very stark. So for me – time is funny – it feels like I finally completed the beginning of that. Most people tend to focus, and rightly so, on, okay you made one solo album 12 years ago, [it was] electronic-y, how does this all fit together? But the real story is it connects to that acoustic album.”

“I end up buying the narrative,” he continues. “Like, ‘Meh, it’s alright.’ But then I listen [back] and I’m like, this is actually pretty good, there’s some good stuff on here! It doesn’t sound like someone who’s lost in the fucking wilderness, it’s weird. You end up almost subscribing more to the public thing – the indifference, the apathy – it’s disconcerting.”

Ogilala marks another milestone for Corgan – the first time he’s ever relinquished production duties on his own record. Could this be another indication that the former control freak is mellowing as he matures? “On paper it seems like a step backwards, [but] that’s okay. It’s what I needed at that time. There are moments in life where it feels like the hardest thing in the world to let somebody else take the point, but sometimes that’s actually the most courageous thing – admitting that you’re not strong enough to do it all.”

Another obvious similarity, which keen Pumpkins fans will no doubt have already picked up on, is James Iha’s influence – which can be felt not just from the guitar duties he provides on album track Processional, but to the feel of the entire album. “James was probably the person most responsible for me being more interested in acoustic music,” says Corgan. “James brought that softer side forward. So in many ways, [he] has a long-range influence on me ending up here. That’s why it seemed appropriate to not only play him the songs before I recorded them, which he was very supportive of, but also ask him if he wanted to be on the record. It was kind of my way of paying tribute to his influence.”

Talk of James, inevitably, leads us full circle to talk of an original members Smashing Pumpkins reunion. With 2018 marking 25 years of Siamese Dream, it seems like as opportune a moment as any to, quite literally, get the band back together. “I really would like it to happen,” Corgan happily admits. “But you know, for someone who has a reputation as a control freak, I’m not trying to control the process. All I’ve said is only if it’s happy, only if it’s good, only if it leads organically to [that] place. So, whatever happens, if it happens, it’ll be because it’s a good vibe. For once in my life I’m willing to give [people] what [they’d] like to see, no problem. No funny set list, no agenda, strictly let’s have a fucking party and let’s really fucking celebrate.”

So, William Patrick Corgan. In many ways, the musician remains as mysterious and confusing at the end of this interview as he ever has been. The former “control freak” who has offered the future of his band into the hands of others, who has produced a forward-facing album by tapping directly into his past, and who, after years of angst and turmoil, seems positively relaxed about the future. Corgan has a typically esoteric way to describe how he got here as we wrap up our interview. “At some point, the puppy goes paws up,” he offers as our chat draws to a close. “That’s how I feel like now… I’m paws up.”

Ogilala by William Patrick Corgan is available now via BMG.

In Praise of... Smashing Pumpkins' Adore