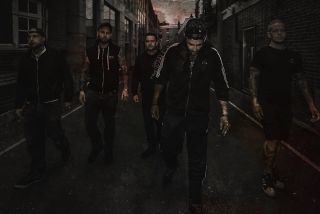 (Image credit: This Is Endless)

If anyone remembers the largely moribund, also-ran state of UK extreme metal in the mid-late 90s, amongst the contributing factors was a lack of collaboration, bands refusing to consider a scene that could be bigger than the sum of its parts, or to open themselves to new influences. It’s all very different now; band family trees have run amok, the likes of Akercocke, the late, lamented Ted Maul, Dripback, Voices and Dead Beyond Buried trading members and firing out fresh and feverish ideas that rattle the cages of death and black metal orthodoxy while still having a direct line to their ever-potent roots.

This Is Endless are a case in point. A London-based collective smashing together members from the above bands over the past four years, as well as Red Method and Onslaught to boot, their ride on the rattling, death metal centrifuge is awash in genuine, old-school terror while still sounding utterly contemporary.

Across its 33 tumultuous, bug-eyed minutes, their debut album, Formation Of A World Below – released on August 14 via their own Endless Records – unleashes an added arsenal of hardcore, slam, sweep-picking frenzy, massive, mutating grooves and Godzilla-on-PCP vocals courtesy of frontman Solomon J Lucifer Christ, all given a bewildering array of scalpel edges by legendary producer Russ Russell.

True to their ominous outlook, the band are releasing a warning shot in the form a lyric video for the track, The Damned And The Weak. It’s a spectacular, not-for-the-strobophobic-averse nightmare vision of industrial hellholes and general existential dismay set to a blistering sonic backdrop akin to a panicked Bruce Banner going, “Hold on, these aren’t gamma rays.”

In This Is Endless’s world, the future might be bleak, but it’s a heart-racing thrill-ride nonetheless.