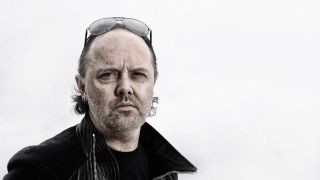 Born in Gentofte, Denmark on Boxing Day in 1963, Lars Ulrich posted an ad looking for like-minded metal fans in the Los Angeles paper The Recycler in 1981. James Hetfield responded and, well, you know the rest…

The band to date have released 10 studio albums, four live albums (discounting the live recordings fans can purchase after a show), a cover album, five EPs, a soundtrack album to their very own feature film Through The Never and Lulu, a collaborative album with the late Lou Reed. They released their long-awaited tenth studio album, Hardwired… To Self-Destruct in 2016.

This is what Lars thinks of his epic journey so far…

“I’ve got a mixed bag of memories of Kill ‘Em All. The primary ones would involve youth, innocence, ignorance and a kind of unawareness of what the future held. We drank the cheapest, shittiest beer we could get hold of and ate the worst fast food, and Cliff [Burton, bass] and a few other people smoked cigarettes. We were just being a bunch of snot-nosed 20-year-old kids, and we would rock ’til we fell over. It’s a bit of a mindfuck, but one thing I’ve realised in the last few months is there’s this kind of instinctive thing that drove it all. When were were 19 or 20, we never slowed down long enough to think – we just did.”

“Cliff was unique and fiercely protective of his own kind of thing. We look back on those years and we were all awkward and disenfranchised. He revelled in being unique and autonomous – and that’s obviously one of the bigger messages of Metallica.”

“I have different relationships with …And Justice For All. Sometimes when I hear it, I sit there and roll my eyes – and other times, I think, Jesus, this was the blueprint for a whole new generation of music.”

“It’s pretty amazing that 5000 people still buy The Black Album every week in the US. I think you file that one under ‘mindfuck.’ I’d like to meet, No. 3267 last week. Who is that person? Did you not own it? Are you just replacing your old copy? Did it just show up on your radar?’”

“Any artist who put their heart and soul into a project would be lying if they said they didn’t care if people hated it. The negative reaction doesn’t change my opinion about Lulu. Metallica, obviously, are fairly thick-skinned. But it was pretty hard for Lou [Reed] to be at the end of that much negative energy.”

“With art, there’s a fine line between collecting and hoarding. Instead of buying very expensive paintings by dead people, I started buying very reasonably priced paintings by living people. You don’t really own art. You’re the caretaker of it, the custodian, for a period of time. I was in a Danish museum recently, and one of the star pieces was a painting that hung in my living room for eight years. I have a small part in this painting’s history. But to me art is something you pass on. You shouldn’t hoard it. That’s not how art should live.”

“Often I feel like there’s two Metallicas. There’s the Metallica I live and breathe every day, and then there’s the Metallica I read about. Those are often two contradictory thing. The things that people get caught off-guard about are completely normal in my mind, but maybe we don’t do a good enough job of explaining them.”

“A lot of people that play rock grew up in broken homes, with problematic and rebellious relationships with their parents and their surroundings. I never had one of those. What fuelled me towards harder rock was the energy, the sense of belonging to something greater. Anger and hostility was never a driving force. I think a lot of Danish people are quite contrarian. If somebody says, ‘Let’s go left,’ then Danish people will go, ‘Let’s go right.’ Metallica has always enjoyed an element of contrary energy. Metallica has always enjoyed jumping off a cliff, and then, on our way down, trying to figure out where we’re going to land.”