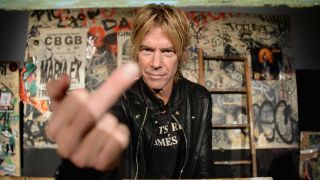 Duff McKagan has been there, done that, and bought the t-shirt. Homer Simpson’s favourite beer was even named after him.

He started out as a young punk in Seattle, laying down the grass roots of grunge in 10 Minute Warning before moving to Los Angeles to find fame in one of the biggest bands of all-time, Guns N’ Roses.

Since leaving the band in 1997, he’s performed with the likes of Velvet Revolver, Jane’s Addiction, Loaded and Walking Papers, and eventually rejoined GN’R in 2016. He’s also published two novels, and in 2011 he even founded a management company [Meridian Rock] that educates musicians about their finances.

On top of all that, he’s a family man with a wife and two daughters. So how does he do it? We sat down with Duff to find out all about his formative years and the experiences that would go on to shape his storied career…

I was always going to end up a musician

“I’m the youngest of eight kids, and everybody older than me played. That’s why I kind of play everything – because of all the jam sessions I had growing up. The first song I learned on bass was Birthday by The Beatles, because I played it for somebody’s birthday party. There was the blues scale, right there. What more do you need to know at the age of 12? I’d seen some older kids play drums, and they seemed to be fairly easy. Then I learned G, D and A on the guitar, and I was set. It’s like The Damned said, I learnt three chords and I started a band.”

Punk rock made me

‘For those who don’t know, the punk band D.O.A. really wrote the book on touring in a van through North America. They actually had a list of all the phone numbers for the clubs, if there was one, or if not then the house that you would play and a crash pad. They also knew how to get fake credit card numbers, because back then entire tours were booked using payphones. Black Flag got a copy of D.O.A.’s DIY guide to touring, and it all began from there. Bands started touring across North America, and I got to see all that really start. My first gig was supporting Ron Reyes’ Black Flag when I was 14. It was a very exciting time.”

“Heroin came into Seattle in a big way around 1982. It decimated all of my friends: my girlfriend, the guy I lived with – everybody. I was playing guitar in a band at that time called 10 Minute Warning, and we were signed to Alternative Tentacles [Jello Biafra’s label]. We’d toured with Dead Kennedys and Black Flag in ‘83/’84, and we were at the top of the heap. We were different. We were slow, and weird, and heavy. But then heroin came into the band. A good friend of mine came to me one night when he was strung out, and he told me I was like his hope, because he thought I was the only guy who could get out and make something of myself. So I put in my notice at my job, and I took the 360 bucks that I had and I drove to LA. That was in 1984.”

“We formed Guns N’ Roses within a couple of months of me moving to LA. The band was a really cool amalgamation of punk, metal – like Motorhead – and basically just really good, deep-cut records. Axl even brought in some stuff like Nazareth that I’d never been exposed to before. There was Prince and Cameo, and all this cool funk stuff in there as well. That’s what you hear driving the backbeat on Appetite [for Destruction]. We’d listen to that stuff all the time. And Hanoi Rocks were a big influence on us, too. Slash and I had tickets to see them at The Palace [Avalon Hollywood], and the week before the concert was due to take place the car accident happened. Razzle [Nicholas Dingley, drummer in Hanoi Rocks] died and the band broke up. That was during the winter of ’84. Afterwards there was a wide-open space. It felt like whatever happened next was going to be on our shoulders. But then again, at that time every 20 year old kid who was in a band in LA probably thought that.”

If at first you don’t succeed, fuck ’em

“Our first gig was to three people. Our second was to five. Anybody who says they were at our first or second gig is lying. Even our tenth gig – you weren’t there either, because there was nobody there. But once we started to get a draw in LA, it seemed like the word spread. There was no internet or cell phones back then. We put flyers up, and we had a mailing list, and that was about it. But we were really on top of that stuff. So we built up our audience that way. And our audience would drink a lot, so the Troubadour [West Hollywood music venue where Guns N’ Roses started out playing] loved having us there. We started on a Monday night opening up for some awful band, then we’d move up to Tuesday night, and so on. We’d play alongside punk bands like Social Distortion and The Dickies, and we were kind of accepted everywhere. Jane’s Addiction was just coming up too, and that’s kind of your benchmark right there, particularly as a rhythm section. Steven [Adler, original Guns N’ Roses drummer] and I would go and watch Jane’s Addiction all the time. You’re no longer a kid when you’re watching a band of guys your age who are that good. They were smoking! But there was no competition, because we weren’t competing for gigs or record deals, or anything like that. It was just major league appreciation.”

“We’d been playing shows solidly for three years before anybody knew who we were. We spent a couple of years opening up for The Cult, Alice Cooper, Iron Maiden, and Motley Crue, and then we got on a tour with Aerosmith. At the start of that tour is when Sweet Child O’ Mine came out. Appetite had been hovering in the ‘90s on the Billboard Charts for a long time, and it suddenly started moving up. We were on this tour, and there’d be 70 people showing up early to catch our show. Then the single started getting played, and the next week it was 700 people. The single then moved into the Top Ten, and the album moved into the Top Twenty, and suddenly it broke. The record and the single both went to Number One, and all 17,000 people started showing up early to see us play for the last few weeks of that tour. That’s why people think we blew up over night, but in reality we’d been at it for a long time before we broke big.”

Everybody loves you when you’re popular

“People soon started dressing like us. They started wearing cowboy boots over their pants and cutting the knees of their jeans, and wearing scarves and crap like that. When we got back to LA I remember seeing it. All the ads for bands in magazines would look just like us. I thought it was nice that all these people finally realised I was a really funny and engaging human being, and all the girls finally realised I was the best looking guy around – because I already knew all this stuff. I didn’t figure out for about six months that it had something to do with my band blowing up.”

Everyone around me was dancin’ with Mr Brownstone

“Drugs were a big part of Guns N’ Roses from the beginning. I moved from Seattle to get away from heroin, only to get to LA and discover it was everywhere there too. That’s when I found out that heroin was everywhere, and that was a big growing up point for me. Money meant we could afford drugs, and drugs started to become readily available everywhere we went. When you’re famous, all of a sudden you’ve got a lot of friends who want to get high with you. We didn’t know anybody that was sober, because we just weren’t in those circles. It got so bad with me that I thought everybody around me was high on drugs: my postman, the lady at the grocery store, people in hotels where I stayed – basically everywhere I went.”

Friendship always wins out in the end

“I could’ve done things differently and been more of a friend and helped certain situations along, but truthfully I didn’t even know who I was until I got sober. Izzy [Stradlin] had already left the band, and when I got sober I had to kind of prove it to him. He was like, ‘Are you really sober, man?’ But he was a good friend to me through that time. Axl remained a good friend until I left the band, and then we became estranged for a while. And Slash was still really in it. We were still totally friends, but I just wasn’t in that world. It took about seven years for us to reconnect properly. I wasn’t staying away from him because I hated him, I just couldn’t risk being around him because he was my running partner for a long time, and I didn’t trust myself around him.”