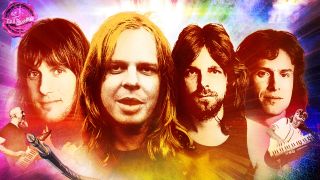 Last year we asked readers of Prog Magazine to vote for their favourite keyboard player. Because if the guitar player is the doyen in heavy metal, then surely the keyboard player is king in the world of progressive rock. Seems a lot of you agreed. In flooded the votes, these were the top 10. Seems you a readers of taste and distinction. But we knew that anyway...

Perhaps the odd man out on this list, but a fantastic keyboard player nonetheless. Deep Purple were unequivocally heavy rock, but Lord’s early solo albums like Gemini Suite and Sarabande showed progressive inclinations. Equally he was the man behind Concerto For Group And Orchestra, which is pretty darn prog too. Great friends with Rick Wakeman and Keith Emerson, Lord would do Deep Purple’s on stage introductions, often finishing with the line, “And I’m Rick Emerson!”

You Say: “Simply the power and unique sound of the ‘purple’ organ that could compliment or ‘combat’ the guitar head on, and the classical background.” – Doug Upton

He’d already worked with Buddy Miles, Alice Cooper and Kiss before he replaced Kevin Moore in Dream Theater, with whom he spent five years. He’s since worked with the likes of Billy Idol, Yngwie Malmsteen, Steve Lukather and Allan Holdsworth, as well as forming Black Country Communion with Joe Bonamassa, Glenn Hughes and Jason Bonham. He also recently reunited with his old Dream Theater pal Mike Portnoy for the prog supergroup Sons Of Apollo.

You Say: “In terms of aggressive, in-your-face rock keyboardists, it is hard to find a stronger player who is more fun to watch live. He’s played with everyone and with good reason, but I like his solo stuff the best personally. It’s so over-the-top it makes me giggle.” – Pecknotes Productions

Having met Trevor Horn while auditioning for Tina Charles’ backing band, Downes rose to prominence in The Buggles, whose Video Killed The Radio Star was famously the first song played on MTV. The pair joined Yes for their 1980 Drama album and tour, before Downes hooked up with John Wetton, Steve Howe and Carl Palmer
to form the initially successful Asia. Also a renowned producer who has worked with the likes of Greg Lake and Mike Oldfield, Downes returned to Yes in 2011, as well as remaining a member of Asia.

You Say: “I doubt many readers will include Geoff in their lists, as most people think of the mile-a-minute virtuosos or flamboyant personalities. Geoff is always near the top of my list because he’s an excellent orchestrator, often saying more with fewer but the best-fitting notes. A masterful technician and sound designer and a heck of a nice guy!” – Brian O’Sullivan

Although early in his career the young Swiss-born keyboard player had worked with Stéphane Grappelli and toured with John Coltrane, it was as a member of the prog rock band Refugee, alongside former Nice members Lee Jackson and Brian Davison, that Moraz rose to prominence. He was plucked from Refugee to replace Rick Wakeman in Yes, with whom he recorded Relayer, but was out of the band prior to Wakeman’s return for Going For The One. He then joined The Moody Blues with whom he played between 1978 and 1991 before maintaining an impressive solo career.

You Say: “Technically great, and after a cracking album with the band Rufugee, which had some terrific music and ideas, he stepped into the light with Yes and the album Relayer. Though short-lived in the prog world, Moraz left us with a great album, the centre piece being the wonderful Gates Of Delirium.” – Mike Staggs

Kelly was studying electronics and playing with local Essex prog rock band Chemical Alice when Marillion came calling in 1981. He’s been with the band ever since, his trademark swirling keyboards very much informing the early Marillion sound. Alongside founder member Steve Rothery, he is Marillion’s longest serving member. He’s also performed with Travis, Ayreon, DeeExpus and Edison’s Children, and is credited as being the man behind the crowdfunding proposal for the band’s Anoraknophobia album, which inspired Pledge and other business models.

You Say: “A mainstay of Marillion since the debut album and an unsung hero of the band. He has a great touch and a style that is his own yet reminiscent of Banks and Wakeman in particular. A great player and a solid backbone of the Marillion sound.” – Gary Bowyer

A Juilliard attendee for piano aged just nine, by his late teens Rudess was more interested in synthesisers and progressive rock. He was offered gigs with both the Dixie Dregs and Dream Theater, initially choosing the former. However, he worked with Dream Theater drummer Mike Portnoy on his Liquid Tension Experiment side-project, and in 1999 he replaced Derek Sherinian in the prog metal overlords. He’s been with them ever since, although he delves into his solo career and has also worked with both Steven Wilson and Ayreon.

You say: “He’s my only choice. He continues to create and push new boundaries within the prog universe, implementing new tech and adapting to what’s available. Never going stagnant!” – Brad Gale

Roger Waters and David Gilmour may have dominated the Pink Floyd headlines, but few will argue against the fact that Wright’s delightful keyboard sound coloured much of what the band produced. He also wrote some of the band’s more memorable pieces of work. He rarely ventured beyond the confines of Floyd, but when he did, it was often more than worthwhile. Famously sacked by Waters during the making of The Wall, David Gilmour brought him back into the fold for 1987’s A Momentary Lapse Of Reason, while The Endless River was Gilmour and Nick Mason’s final tribute to their late keyboard player.

You Say: “The most underrated keyboard player of all time. The master of serving the music with his playing. Nothing fancy, but always the right choice of notes and chords.” – Peter Rautell

Banks formed Genesis with Charterhouse school pals Peter Gabriel, Mike Rutherford, Anthony Phillips and Chris Stewart in 1967, and remained at the helm of the prog rock giants until they were effectively put into cold storage following a 2007 world tour. He is responsible for many of the band’s lengthy epics, and also for bringing a big symphonic edge to their sound. Although his solo career was not as successful as some of his bandmates, he is often seen as the progressive core of the Genesis sound. He recently worked in the classical realm with three well-received works.

You Say: “His keyboards were more upfront and integral to Genesis songs, Steve Hackett and Mike Rutherford not being the flashiest of guitarists.” – Pierre Shepherd

You can talk about the capes, the ambitious live shows on ice and also at remarkable settings like Hampton Court. But this doesn’t do proper justice to a man who was never afraid of taking huge risks, not just in staging spectacles, but also in his passion for playing great music. Wakeman’s time with Yes helped define prog as we know it, being filled with timeless brilliance, yet he also worked wonders as a hugely in demand session man, with an array of talents from Bowie to Sabbath. He was also a crucial part of The Strawbs earlier in his career, and is currently making a seismic impact with ARW. The man’s style is fluent, and underlines a love of many genres, all cohesively brought into focus.

You say: “The king of keyboards. Rick is the guy who made me want to be in a band, and is a source of influence in almost everything I do.” – Matt Smith

Unquestionably one of the most important keyboard players of the past half century, Emerson first made his reputation in the 1960s, with The Nice, before going on to co-found the celebrated ELP. Subsequently, he showed enormous versatility as a solo musician, and also in collaboration with others as well as composing movie soundrack music.

His effortless ability to move from rock to jazz and classical motifs helped to inform
a spectacular and unrivalled approach to his art. Emerson was as capable of introspection as well as flamboyance, and he brought a keen sense of showmanship to performances, yet this never overshadowed his mastery of the keys, in particular the Hammond organ. His death in March 2016 robbed the world of a visionary.

You say: “For me, Keith Emerson was the taproot that fed and supported all the others who followed. He pushed the boundaries, was amazingly creative and filled huge spaces with awesome dexterity and minimal gear.” – Barbara Gray