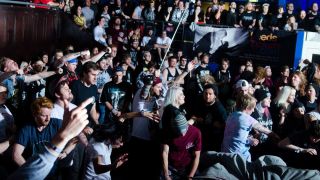 The first weekend in September will see crowds in Leeds and Bristol losing their shit to metallic hardcore legends Hatebreed, arguably the biggest headline act in the ten-year history of Ghostfest. Expanding beyond its Leeds roots for the first time, it’s a world away from the festival’s humble origins as an intended one-off event to showcase the best in British extreme metal and hardcore, and prove some doubters wrong for good measure.

At just 14, an age when most metalheads are just starting getting into the music and going to their first shows, Ghostfest founder Toyan St Hilaire who also runs the Ghost Music Label, was beginning his first steps in the music scene, putting on his first show in his hometown of Leeds for metallers Murder One. The seeds that led to a fully-fledged festival all started with his own band and some sage advice from its maiden headliners.

“I was in a band called Once I Tried and we recorded with Dan Weller from Sikth. Then the band broke up, I didn’t know what to do with myself, so he and others suggested I put on a festival,” explains Toyan. “I didn’t know what to do as I was only 13, so they gave me a bit of advice and by 2005, when I was 17, we put on the first Ghostfest.”

The inspiration for Ghostfest itself came from a desire to emulate the smaller, local fests held across the pond of which there was no British equivalent, which Toyan himself discovered thanks to a less than helpful music store employee. As Toyan remembers, “I bought the DVD of the New England Metal & Hardcore Festival, which took me from Linkin Park and Slipknot and introduced me to the heavier side of metal and hardcore and I was amazed by it.

“I went to HMV to see if there was a British version and was told their wasn’t. I remember saying to him ‘Do you know what? I’ll make my own then’, and then the guy in HMV laughed at me. So the next couple of years I really wanted to do it, so we could have a festival and a DVD, not an annual thing, but just a one-off.”

Above: Martyr Defiled at Ghostfest 2014. (Pic: Sabrina Ramdoyal) The inaugural event was headlined by Welsh post-hardcore mob Hondo Maclean and Sikth before they split up and proceeded to be ripped off by everyone and their mum, alongside underground road dogs Eden Maine and Johnny Truant on the second stage at the Cockpit in Leeds. Staying true to his word, Toyan also recorded and released the show on DVD. The Sunday also featured little-known Sheffield noisemongers Bring Me The Horizon and the debut performance from a tech-metal band from Brighton who would also go onto much greater things. “Oliver, the singer from Johnny Truant, said ‘I’ve got mates in a band and I need to get them a gig so can you let them play?’ I did and that band was Architects who were on second.”

Though Toyan obviously refuses to take credit for launching the globetrotting careers of any of the bands that have graced Ghostfest’s stage in their formative years, he does rightfully admit to having a good ear to the ground, giving opportunities to the likes of While She Sleeps, Bleed From Within and Lower Than Atlantis on bills that range from the poppy The Blackout to the murderous death metal of Cryptopsy and The Berzerker. Adamant that it was a platform for all bands from across the UK rather than the local Northern scene that has produced so many bands of note in recent years, Toyan describes how the festival has been a mutually beneficial for bands looking to make a name for themselves. “If a band of those particular sub-genres meant anything in the UK, Ghostfest was one of the things that people would look at, as it would mean something if the band had played,” he explains. “There’s a lot of competing festivals where that’s true of now, but back then the only other festivals for metal and hardcore really were Download, Leeds & Reading, Bloodstock etc.”

After outgrowing the confines of the Cockpit, Ghostfest established itself in the more befitting surroundings of Rios and Leeds University, with the headliners gradually growing to include heavy-hitting imports Whitechapel, Despised Icon and Suicide Silence, with two stages giving plenty of opportunities for smaller British bands for whom the likes of Download and Sonisphere were beyond their reach.

“Ghostfest relied on the bands from the local scenes, but then those bands also needed Ghostfest where they could all fit in one place. The bigger festivals wouldn’t have taken a chance on a handful of bands who were the size of BMTH for example,” explains Toyan. It’s this DIY, homegrown ethic that cemented the festival’s appeal, becoming an annual pilgrimage for fans across the country whatever the line-up. As Toyan reveals, “Ghostfest became a holiday for fans of metal, hardcore and deathcore, regardless of who was playing. For example, last year due to clashes with another festival I couldn’t announce the headliners until literally a week and a half before it started, yet we still sold loads of tickets despite the fact people didn’t know who was playing! Those fans have now grown up with the festival over ten years, with the same people, the same community coming every year.”

Mike Jones of the MJR Group, who helped Toyan book the 2009 and 2010 bills and make 11 roundtrips to Asda in his Mini to collect the band’s riders, is aiding the festival’s expansion from a two-day event in Leeds to now include a show at Bristol’s Motion venue. “The decision to bring Ghosfest to Bristol was to make it more financially viable. You have a lot of bands flying in and so we can split the cost over two shows and pass on the savings to the fans, but also to bring it to a larger audience who might not be able to afford the costs of a two-day event. We’ve had success with Temples and north/south Festivals in Bristol so we know how to make it work.”

Speaking of reuniting with Ghostfest after five years, Mike explains his emotional attachment to this small but resolute brand, adding, “I get more enjoyment from putting on a festival and creating that unique experience for the attendees than just booking a run of tour dates.”

“It’s amazing that it’s got to ten years,” proudly reflects the show’s founder. “I remember back in 2006 when people were asking me on Myspace ‘When’s the next one?’ as I didn’t foresee it as annual thing. It’s completely changed my life in the strangest ways over the last ten years.”

Now firmly established as an annual event that holds its own against the likes of Slam Dunk, Tech Fest, and Damnation, Ghostfest has nothing left to prove, having far exceeded Toyan’s expectations as the distinctly North American flavour of this year’s event – a reunited Despised Icon, Emmure, Oceano, Crime In Stereo and Born Of Osiris joining the headliners – plays to more people than ever before. Few would bet against bigger, better line-ups in the future as this defiantly DIY festival heads onwards to 20.

What We Learned At Ghostfest 2014