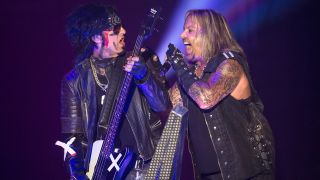 It's official: Motley Crue are back. Despite only wrapping up their heavily-touted Final Tour a meagre four years ago, this week they announced their return to life as a fully-functioning touring band. Vaguely attributing the decision to reunite to the success of Netflix's The Dirt adaptation, which they say introduced them to a whole new audience, they explained that it's only right for them to give this new audience a chance to experience the Crue live.

But it's not only Motley Crue who've reneged on a promise that a tour would be their last. Over the years, the likes of Ozzy Osbourne, Kiss, The Who and plenty more have thrown the towel in, only to gingerly pick it up a few years later and haul themselves back out on the road. And who can blame them? Times are tough for musicians these days, and those loft conversions won't pay for themselves.

Here, we take a look back through 10 tours musicians promised would be their last, but... weren't.

After an attention-grabbing press conference in which members signed a contract banning them from ever stepping foot on the road as a band again, Motley Crue embarked on their Final Tour in 2015. The cessation of touring agreement they signed came into effect at the end of that same year and stipulated that the individual members of Motley Crue could be sued should they ever head out on tour again. It seemed as though it was really it, this time – I mean, you can't argue with signing a contract, right?

Wrong. Barely four years since The Final Tour wrapped up, Motley Crue have – literally – blown up their contract and announced they'll be hitting the road again, citing "an entirely new legion of fans, who, along with diehard Crueheads, demanded the band tear up that stupid contract and come out of retirement".

It was Roger Daltrey who pushed for the band to stop touring, stating unequivocally “It’s a nightmare” at a press conference in October ’82. “We can’t get any bigger than we are,” the singer explained, adding “It’s good to go out on top.” Diplomatic Rog didn’t mention that Pete Townshend’s drink and drug problems were his biggest issues with life on the road. By 1989 various wounds had healed and The Who were off round the world again, albeit with a horn section and backing singers. Today The Who continue on their “long goodbye,” with a new album, Who, due to drop in December.

After a period of inter-band turmoil, in the midst of a self-proclaimed “full-blown coke-and-tequila phase”, Francis Rossi announced he didn’t want to tour anymore. “I started to see continuing Status Quo as a complete and utter waste of time,” he revealed in the band’s 2004 autobiography XS All Areas. Every date on that ‘farewell tour’, Rick Parfitt was bereft: “I just thought: but why? How had it come to this?” In the event, Quo were re-energised by their Live Aid opening slot, and their touring never really stopped. Sadly, Parfitt passed away in 2016, but the band were back with a new line-up, a new album and a Lynyrd Skynyrd support tour this year.

When US ticket sales for 1998’s Psycho Circus Tour – the second worldwide jaunt for the band’s reunited (and repainted) original line-up – proved disappointing, Gene Simmons’ wily business sense kicked into gear. The year 2000 seemed an appropriately apocalyptic round number on which to embark on a Kiss Farewell Tour, which sure enough was a much bigger money-spinner. Less than two years after their ‘Farewell Tour’, Kiss were shamelessly back on the road, although by then they had imposters posing as Spaceman and The Cat, so the Farewell Tour was a farewell of sorts. Kiss are on a farewell tour again right now, and have promised that their current End Of The Road tour will wrap up in July 2021, but with these guys, you really just never know.

Stealing the joke from Monty Python’s First Farewell Tour in 1973, the Eagles had always enjoyed a pithy tour title; 1994’s Hell Freezes Over Tour was famously named after Don Henley’s 1980 remark about when the estranged musicians would next work together. By 2005, the foursome were acknowledging that you might not see them tour again, but you probably would. “The longer this goes on, the better these songs sound,” insisted Glenn Frey. “There is a sort of honesty in calling the tour Farewell 1, with its implication that Farewell 2 will follow soon.”

Frey has since passed away, but as it turns out, both the farewells were short-lived. The band remained a touring concern, and recently announced a full Hotel California tour, with orchestra and choir, for 2020.

Maybe No More Tours was just too good a name not to use. Ozzy maintained that his worldwide jaunt in support of 1991’s No More Tears LP would be his last, that the Prince Of Darkness was retiring, that he missed home and wanted to spend more time with his family. Thanks to The Osbournes, we all now know what his family was like, so it’s little surprise that Ozzy was back on the road for the Retirement Sucks! Tour less than three years later. Currently touting the No More Tours 2 tour – which has had to be rescheduled twice already due to Ozzy's ailing health – Ozzy is due back on stage later in November, and will pick No More Tours 2 back up in October 2020.

“We lied.” With this novel admission from Glenn Tipton, the much-publicised Epitaph World Tour was revealed to be not so much the end of Judas Priest as a new beginning. “It’s Richie Faulkner’s fault: let’s blame Richie,” added Rob Halford, referring to the guitarist who replaced founder member KK Downing after his shock departure, just two months prior to the first date of the ’farewell tour’. With this new injection of young blood, the band cranked out a new album, Redeemer Of Souls, and took it on a 129-date world tour; so very much business as usual. Business continues to this day, with the band gearing up to celebrate their 50th anniversary in 2020. No signs of stopping here.

Explaining Nine Inch Nails' poignant 2009 tour title, Trent Reznor announced that “NIN as a touring live band… is stopping.” His explanation was simple, and perhaps a little on the catty side: “I’d never want to be Gene Simmons, an old man who puts on make-up to entertain kids, like a clown going to work… In my paranoia, I fear that if I don’t stop this, it could become that.” However, NIN were back on a massive arena tour in 2013, and were last spotted hitting the road on their Cold and Black and Infinite tour in 2018. The Demon would be proud.

In Melbourne in 2007, frontman ICS Vortex declared “Welcome to the last Arcturus show ever.” In 2015 he admitted to Metal Hammer that when he made that announcement he thought: “Ooh, that’s a lie!” The members of the post-black metal supergroup were busy with bands like Dimmu Borgir and Mayhem and family commitments, and the singer summed up the band’s attitude as “Why the fuck shouldn’t we jump on the ‘we’re splitting up’ bandwagon and see what happens?” What happened was, “an alien” told them that 2011 was Arcturus’ lucky number, so four years later they were back onstage… It might not have given their career quite the boost they were after; in December 2016, the band announced on their Facebook page that a new Arcturus track had been recorded. However, as of 2019, this track is still unreleased.

“The invitations are sealed. The table is set. The event of the millennium is being staged once and for all – The Last Supper of Black Sabbath.” So ran the portentous announcement on the band’s website in March 1999. Ozzy had already changed his mind about retiring four years earlier, so this vaguely-worded news raised many suspicious eyebrows. The tour proved historic enough – it was the last to feature Bill Ward on drums – but Ozzy, Tony and Geezer continued on The End Tour until February 2017.