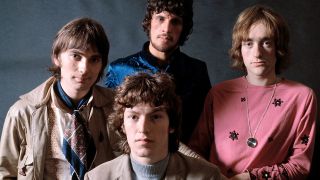 Steve Winwood was still in his ‘teens when he co-founded Traffic, post-Spencer Davis Group, in April 1967. Joined by Jim Capaldi, Chris Wood and Dave Mason, it was a mercurial set-up that made for a fitful lifespan, though they left behind an influential catalogue that offered a thrilling synthesis of soul, jazz, psychedelia and prog. Sometimes within the same song…

Never likely to win any prizes for its lyrical depth – ‘Make your own words up if you want to / Any old words that you think will do, yeah’ – this frisky psych-pop summons is nevertheless infectious as hell. Its title was later adopted for the moniker of Island Records’ famous cut-price sampler album.

Equal parts R&B and psychedelic soul, this lysergic beauty concerns a wine-guzzling figure with gypsy blood in her veins, her quarry lost in a dreamlike state of druggy reverie: ‘And all around her feet flowers bloomed / But they were made of silk and sequins two by two’. A dash of New Orleans voodoo in deepest England.

Post-Blind Faith, Steve Winwood’s immediate intention was to cut a solo album, though it eventually morphed into a Traffic reunion (minus Dave Mason). Winwood excels on this folk-jazz hybrid, driving its rhythm on Hammond and piano, though it’s equally indebted to the skronky sax and lyrical flute work of Chris Wood.

Omitted from the band’s second album, but included on the compilation that Island hastily scrabbled together after Traffic split in early ’69, the funkified Medicated Goo features a yammering piano, Winwood’s animated vocal pipes, allusive references to Little Richard and a cast of characters that includes Freaky Freddie Frolic and Auntie Franny Prickett.

Dave Mason had already quit and rejoined Traffic by the time they came to record their second album, his best contribution being this nifty R&B mover splashed with paisley swirls. Chris Wood offers a beguiling sax break, while Steve Winwood adds splenetic backing vocals at the climax. Later covered by Joe Cocker, The Jackson 5 and Lulu, among others.

The trio go full-pelt folk on Winwood’s rootsy arrangement of a traditional ode to the pagan symbol of the harvest. Far removed from the psychedelic leanings of old, its glorious six minutes of acoustic pastorale owe more to Fairport Convention and Steeleye Span than they do Sgt. Pepper or Jimi Hendrix.

The first true flowering of Traffic’s vast potential offers an index of possibilities, from blues and soul to prog and psychedelia. Winwood’s vocal lines, lower in the mix, exude a certain trippiness, before a digressive guitar solo ushers in Jim Capaldi’s pounding drums and a great biker riff. Hendrix, The Grateful Dead and CSNY recorded their own versions later.

A mesmerising tour de force in which the funky lilt of the opening section elides into a rushing Hammond chorus, with Winwood delivering one of his greatest lead vocals (curiously too, he sounds like a pre-echo of classic Peter Gabriel). Capaldi keeps things moving forcibly as Chris Wood doubles up on organ.

This stunning 11-minute epic, co-written by Capaldi and Winwood, is one of the benchmarks of early ‘70s jazz-rock, built around a simple piano motif. It also shows that Traffic were masters of the deep groove, easing their way from slow deliberation to proggy delirium. The title was gifted by US actor Michael J. Pollard, a good friend of Capaldi’s.