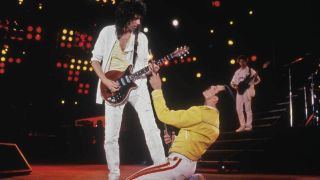 On 27 July 1986 Queen played what their record label EMI called “the first stadium rock gig behind the Iron Curtain” – at the Népstadion in the Hungarian capital of Budapest.

Other rock acts, including Elton John, Iron Maiden and Dire Straits, had played in Hungary before, but Queen were the first to perform at the huge open-air ‘People’s Stadium’.

“We like going places where it’s a challenge,” explained guitarist Brian May. Unusually for Queen, they were even prepared to lose money on the venture. “We’re doing it for a tremendous sense of job satisfaction,” claimed drummer Roger Taylor.

The concert was scheduled in the second half of Queen’s Magic tour, ahead of shows in France and Spain. Both the gig and Queen’s time in Budapest were filmed for the following year’s Magic: Queen In Budapest concert movie and documentary.

The British and Hungarian governments regarded the show as building a cultural bridge between East and West. The ruling Communist party, under Prime Minister György Lázár, even announced a “lenient restriction on audience behaviour” at the concert. This meant clapping was permitted, but no smoking or drinking. But not everyone was happy. The president of the 5000-strong Hungarian wing of the Queen Fan Club claimed his members had acquired just 100 tickets for the 80,000-ticket event. “Queen only want the money now,” he complained.

Queen made their arrival into Budapest on a hydrofoil along the River Danube. Once they’d embarked, they were whisked past fans, newspaper reporters and TV crews and into a reception at the British embassy. Freddie, a man who once said “I believe in leaving politics to the chaps that are paid to the job, dear,” was uncomfortable mingling with the various dignitaries, and was overheard saying he’d “rather go shopping”.

Queen’s PRs were keen to get as much publicity for the event as possible. But the Fleet Street journalists and NME, now Classic Rock writer David Quantick flown in to cover the historic occasion were not permitted an interview with Mercury. Instead, they had to make do with a few of his choice bon mots during dinner that evening.

Halfway through the meal, Quantick recalled Mercury leaning across the table to ask Roger Taylor’s very drunk Hungarian dining companion how big her vagina was (although ‘vagina’ was not the word used) – and “can you get it over your head, dear?” This caused much consternation with the interpreter, before Taylor made the singer apologise.

The following day’s show was spectacular. Queen were old hands at playing stadiums, and Mercury worked every inch of the 60,000-square-foot stage. Eighty thousand people watched inside the stadium while a further 45,000 ticketless fans, some who had travelled from as far as Warsaw and Odessa, congregated outside to listen.

But conscious of the armed soldiers positioned around the arena, the audience were unsure how to react. Having already played the big hits Under Pressure and Another One Bites The Dust to a slightly muted response, Queen’s big breakthrough came when Mercury and May performed the traditional folk song, Tavaszi Szél Vizet Áraszt (translated as Wind, Water, Spring, Flood). Mercury had the lyrics written phonetically on his hand, and disguised the ‘crib sheet’ by extravagantly flicking his fingers to sneak a look. But it worked. “The reaction at that point was fucking deafening,” said May.

Queen left Hungary as champions. Before they departed, a journalist asked Mercury if they would ever return. “If I’m still alive,” he replied. What nobody else, including his bandmates, knew then was that he had contracted the AIDS virus and that the Magic tour would be his last.

Every song on Queen's Greatest Hits, ranked from worst to best