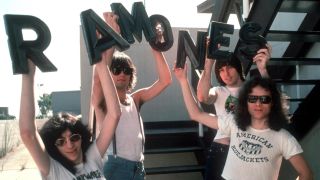 I am aware that many would consider this a fool’s errand. Doubtless you will argue on the validity of some entries and decry the omission of others. But the Ramones were punks, and punks don’t care what you think, and neither does this list.

The objective fact of the matter is that the Ramones were one of the greatest rock n’ roll bands of all time, ever, even if their biggest hit only scraped the top 100 (Rockaway Beach reached number 66 in January 1978), and even if they were mostly ignored or overlooked by rock fans until they all died of cancer or drugs and suddenly turned into legends and icons, at least according to t-shirt sales.

Again, that is not the important part, it makes no difference if you bought your first Ramones album in 1977 or two weeks ago, if you’re some late-to-the-party doofus it’s cool, the Ramones wrote these songs for you anyway. They are misfit anthems for gawky dipshits as well as street-savvy chain-smoking hip kids, the cool and the dumb and square and the hopeless all get to dive in and grab big greasy fistfuls, that’s why they made them, so you could fit in somewhere, even if somewhere is nowhere.

So here you go, 10 of the Ramones best, according to one dude who doesn’t know anymore than you but loves the Ramones now and forever. Call me a numbskull in the comments all you want and then go buy some Ramones records and make your own dumb list.

From Ramones’ second album, 1977’s Leave Home. Who knows what it was really about? Dee Dee wrote it and he grew up in Germany, so he probably thought about fascism a lot, especially with a bowl-cut tyrant like Johnny Ramone at the helm, and anybody growing up in the 70’s certainly contended with the Vietnam conflict and its aftermath. Mostly it’s a jumble of jumpy, paranoid thoughts set to John’s chainsaw riff, but the “rules” count-off is so catchy and so fun to recite – “Fourth rule is… eat kosher salami!” – that it’s gotta make any top-10 Ramones list.

Not a Ramones original, Needles and Pins is a chewy wad of bubblegum originally (co-)written by Sonny Bono in 1963 and first recorded by Jackie DeShannon a year later. It has been covered many times over the years by everyone from Tom Petty to Stevie Nicks. Everybody’s got a fave version – Cher’s is amazing, incidentally – but the Ramones may have captured the awkward teenage longing better than just about anybody. A great homage to their 60’s roots and one of the many highlights of 1978’s Road to Ruin.

Pet Semetary is a goofy clunker of a horror flick, but the Ramones surprise inclusion on the soundtrack not only served as a much-needed reminder that the band was still alive and well, but re-routed horror fans back to the punk/garage genre that embraced all things creepy throughout the 50’s, 60’s, and 70’s. What, we were supposed to let fucking Dokken keep writing slasher movie themes? The film was based on a Stephen King novel, and he was an unabashed fan of the brudders. The feeling was mutual. The Ramones loved King’s books and were all dyed-in-the-wool horror/kitsch/trash movie and culture fans, so it was the perfect marriage of sound and vision. Great song, too. Not everybody thought so at the time – it was nominated for a Razzie for worst soundtrack song in ’89 – but it fits in perfectly with the band’s best 70’s stuff.

For some dumb reason, in 1984 the Ramones thought it would be a good idea to make a hardcore album. Too Tough To Die was the result and it’s not very good because the Ramones weren’t hardcore. They didn’t even understand the concept, really. But Warthog was a happy accident, a fun little bone-cruncher of a tune that sounds like a particularly scathing satire of ’77 era punk. Might be the snottiest thing they’ve ever done, which is saying something.

Despite their punk heritage, the Ramones didn’t like being poor. They wanted to be rich, or at least make enough money to afford a big enough bus to hold all of their egos comfortably. End of the Century was supposed to achieve that. It was their big rock star move – record an album of should-be pop hits with Phil Spector, architect of the “Wall of Sound”, arguably the most important pop producer of the 60’s. How could it miss? Every song would chart and they’d finally reap the rewards of their efforts. Well, it didn’t really work out that way. Spector didn’t quite get them, and the album turned out pretty limp. But it did churn out a couple gems, including this one, a near-perfect combo on nostalgia and jittery teenage energy. It didn’t quite do the job for them career-wise, but it remains one of their most enduring classics.

For many people this song, which scraped the bottom of the top 100 pop charts in the US (# 81), was their first introduction to the concept of punk rock. And what an introduction it was. Released in May ’77, it essentially beat a Beach Boys melody to death with a spiked bat. It also rescued long-lost pulp-era jungle queen Sheena from the faded pages of moldy old comic books and brought her into the big noisy city, where she laughed off the disco scene and jumped into the sweaty fray at CBGB’s. Sheena is finely constructed bubblegum, one of the best songs the band ever wrote and a wonderfully vivid snapshot of the era. Why it wasn’ t a bigger hit is one of rock n roll’s biggest mysteries. It was re-recorded later in ’77 for inclusion on Ramones’ third album, Rocket to Russia.

Their only “real” hit and a slam-dunk of surfy proto-punk that celebrates everything great about New York and rock n’ roll and summer and being alive all at once. One of the many collateral delights of listening to the Ramones is that many of their songs contained references places in New York that only people who lived there even knew about. Songs like Rockaway were a conduit to a place that seemed mythical and magical, then and now.

One of punk’s greatest achievements was its gleeful embrace of weirdos and outsiders, and Ramones were the reigning kings of the misfits. The band itself was crawling with psychiatric disorders and Lobotomy is one of their many odes to mental infirmity. You can practically see the kids on the locked psych ward punching their scarred fists in the air, johnnies flapping in the breeze, all chanting “Lobotomy! Lobotomy!” together. Ramones didn’t care how fucked up you were, man, you were still invited to the party.

One of the Ramones’ greatest achievement was their ability to write so vividly about the parts of life that weren’t all that great or fun or interesting. That’s the basis of punk, really, things being kinda lousy. I Wanna Be Sedated is a bummer-jam about being on tour in London on Xmas and not having anything to do except maybe drugs. It’s about a bad time. And yet, it’s one of the most fun, frantic, life-affirming, impossible-not-to-sing-along songs ever. You gotta admit, that’s a pretty neat trick.

The debut single, the one that started it all, and still the single greatest punk rock song of all time. Blitzkrieg Bop stripped rock music down to its bare minimum, reinventing a form that had grown stale and bloated after 20 years. It made everything else seem old and tired and useless. It was fast and furious and to the point. It had a little Elvis and a little Shangri-Las, but mostly it was anger and joy, pent-up teenage hormones and the victorious roar of four leather-bound losers from the ruins of New York City declaring war on everything and everyone. It will outlast us all, and it should.