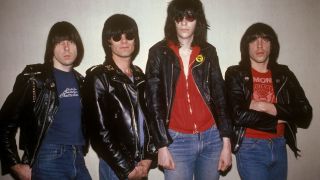 The Ramones gave me validation. I was a kid that didn’t look like everyone else. I wasn’t a metal kid. I liked punk music but I didn’t look like a punk. I had long hair, raggy jeans because my family were skint, I wore baseball boots because they were cheap and had a bike jacket from a cousin of mine. I liked Bazooka Joe and Mickey Mouse, so I walked around wearing cartoon T-shirts. Then I saw a picture of a band who looked like me. I was like, ‘What the fuck do they sound like?’.

To this day, I still remember the first time I played Road To Ruin. It was around 1979 and I held the stylus above the record, too scared to play it in case it was a disappointment. But then I heard it and it was like the sound in my head, or bumping into a twin you didn’t know you had. As far as I was concerned, I was a weirdo and a loner until the Ramones came along. They were first four friends I ever had that were just like me.

As far as I was concerned, the Ramones were all I cared about until the end of time. I started looking for Ramones albums in the local second-hand shops, because you couldn’t find them anywhere else. I’d scour the racks of record shops all over the North East for their albums. I didn’t even know how many they had out or what they were even called.

Soon after, I hitchhiked to London, without a ticket or anywhere to stay. I knew I’d get in through the power of the fact that every weirdo in the world would be at this gig. It was like a bonding session. I thought, ‘Where the fuck do all these people go when there’s not a Ramones gig?’. I’d always get drunk and have a place to stay. They created a community that I knew I wanted to create when I started making music. This is exactly what we’ve got and it was modelled on that. When people come to my gigs, I want them to feel that they belong, that they’ll be looked after or if people will buy them a drink if they’ve got no money. It’s all down to Ramones.

End Of The Century was the album that came out when I was a Ramones fan. I got into Road To Ruin, the one previous to that, but that was slightly after the fact. I remember getting that album purely based on the picture on the cover. But …Century was the first Ramones album I was actually anticipating and ordered three months in advance from a record shop in South Shields.

I went down to the shop every day for weeks, bugging the shit out of the guy who worked there, asking when if it was in yet. I’d walk into town, ask if they had it, then went home. Every day. That’s what makes me laugh about impatient little bastards these days who have to wait more than five minutes for an album.

When they finally handed it to me, I wasn’t even expecting it to be there. I was in shock. My remember thinking, ‘They’re not even wearing jackets!’. My brain was trying to process it all. I had a new set of songs I’d never heard before and they weren’t even wearing bike jackets. Was it really the Ramones?

I remember everything about playing that album for the first time. What pictures were on my bedroom wall, the weather, everything. I got home and digested that album like a starving person eating a chicken. I’m not sure people get the same amount of pleasure from listening to a new record these days. But there I was, just waiting for this one album. They could’ve written a country and western album full of ballads and they wouldn’t have let me down.

The Ramones were like crack to me, like catnip. It was exactly what I wanted to hear. When Motörhead came along, I was like, ‘They sound a bit like the Ramones!’. They wore leather jackets and were like a hairier, uglier Ramones… if that’s possible?

It’s been 35 years since End Of The Century came out. My favourite track on this album is Danny Says, written about Danny Fields [the band’s manager]. It showed a more sensitive side that I was immediately attracted to. It showed there was another side to this force of energy. The next band I really got into were Cheap Trick, but I’m not sure I would’ve got into them if I hadn’t heard this song. I didn’t want pop at the time. It was all punk rock. I wanted aggression. They had all the aggression in the world, but they were like, ‘This is one of the many emotions you’re feeling as a pre-pubescent little oddball’. And I was like, ‘Yep, you’re dead right’.

Where does it rank in their discography, though? You don’t have a single favourite Ramones album. It’s like having to choose a favourite hair or a favourite relative. But, up until [1984 album] Too Tough To Die, I loved everything. That album lost me. They tried to turn into a hard rock band. I longed to like that album and [1986 follow-up] Animal Boy, but Joey sounded weird, like he was being told how to sing or something. Desperation for a hit, maybe? But End Of The Century is like a photograph of that part of my life. Rocket To Russia, which came out in 1977, is technically their best one, and if anyone asked me where to start with the Ramones, I’d pick that, [1981’s] Pleasant Dreams, then End Of The Century. Ramones fans will collect every single thing, though.

Those albums were great teachers to me. I learned nothing at school and left at an early age. I played truant for the last few years anyway. I learned more from Ramones than I did my parents. They were my parents a lot of time. I came from a broken home – divorced parents and domestic violence. Ramones were never abusive. The band were to each other, obviously, but not to me. They inform every new song that I write. There’s always a Ramones streak of their DNA in there. I was a Ramone before I’d even heard them. They completed the picture for me.

Keep up to date with all of Ginger’s recording and touring activity here.