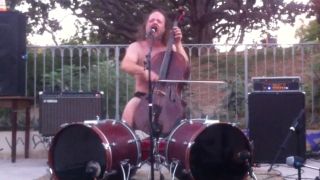 Sometimes less is more, and multi-instrumentalist Mr Marcaille has taken this adage to the extreme with his brand of heavy music. Perched upon a stool, flanked by amps and speakers, he batters the holy hell out of two kick drums while jamming on a cello and screaming into his microphone. That’s the work of three people executed by one man in a pair of rather short shorts.

Based in Belgium, Mr Marcaille is a self-proclaimed “INFAMOUS BEER SMELLY RAW AND HEAVY HARDCORE PUNK ONE-MAN BAND” who also threatens to eat your brains. But he isn’t just some random maniacal metal fiend with a dislike toward teamwork, he’s a fully fledged touring artist and will be ripping up Belgium, France and Germany later this month.

It sure beats Dick Van Dyke’s ridiculous one man band get-up in Mary Poppins. How are you supposed to headbang to that?!

This Man Is The Most Metal Swordmaker On The Planet

Watch this metalhead drum along to I'm A Little Teapot