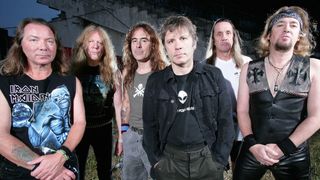 You may not have noticed, but Iron Maiden’s last 20 years have been fairly successful. The band’s live shows have been consistently spectacular, of course, but it’s the studio albums they have released since the dawn of the millennium that have ultimately ensured that they have remained firmly at the top of the metallic tree. Selecting highlights from such an embarrassment of riches is no easy task, but after some deliberation (and a few tears), here are the 10 greatest Maiden songs of the 21st century…

Maiden are rarely celebrated for their ballads, but Coming Home was an instant hit with just about everybody when The Final Frontier was released in 2010. Bombastic, poignant and stirring in equal measure, it’s a showcase for Bruce Dickinson’s extraordinary voice and proved an instant live favourite. Back in the set next time, lads, please.

On 2006’s A Matter Of Life And Death, an album full of powerful moments, The Longest Day stands out because of its spine-tingling building of tension during the verses and then the explosive euphoria of that towering chorus. Oh no, hang on… it’s not the chorus, it’s the bridge. And then the actual chorus arrives, and it’s ridiculously huge. One of Maiden’s most effective and moving war stories.

Again, Maiden fans tend to favour the balls-out galloping stuff, but Blood Brothers has remained a firm favourite among the faithful since Brave New World was released in 2000. Guaranteed to reduce grown men to blubbering wrecks, it’s a shrewd but sincere encapsulation of everything that Maiden stand for. Sing along, damn you.

7. If Eternity Should Fail

Any doubts that The Book Of Souls would fail to equal the creative heights of Maiden’s previous four 21st century albums flew out of the window as soon as this monstrous opening track erupted into life. Quite possibly the heaviest thing the band have ever recorded, it’s an exhilarating storm of riffs, melodies and existential musings that hints at a subtle musical evolution within Maiden’s trademark sound. Well epic.

The Final Frontier’s epic closing track When The Wild Wind Blows may have grabbed most of the attention, but Isle Of Avalon is the album’s true high point. Maiden’s unerring ability to build atmosphere and deliver an almighty payoff has never been so dramatically expressed, and Bruce sings his bollocks off throughout. Heroic behavior all round.

5. The Red And The Black

From Steve Harris’ moody bass intro through to a seemingly never-ending flurry of hooks and anthemic melodies, The Red And The Black is simply one of those instant classics that Maiden fans know instinctively will work brilliantly live. And, of course, that expectation has been more than borne out on the band’s current tour. A glorious epic that sums up 21st century Maiden better than any other.

4. Ghost Of The Navigator

When Brave New World was released in 2000, we already knew that its opening track (see below!) was a monster. But it was the album’s second song that sealed the deal. Ghost Of The Navigator taps into the exploratory wonder of previous albums like Somewhere In Time and Seventh Son…, updating the classic Maiden bluster for a new era and topping it all off with a chorus so big, Bruce could fly it across the Atlantic.

As much as the Blaze Bayley era remains lazily underrated, no one could deny how insanely exciting it was when The Wicker Man emerged, instantly proclaiming the return of Bruce Dickinson and Adrian Smith to be the best thing to happen to Maiden in a long time. It’s a modern metal classic, an irresistible sing-along and one of Maiden’s greatest ever singles.

A Matter Of Life And Death is a special record: the moment when Maiden’s post-millennial endeavours reached a thrilling creative peak. Its finest moment by a whisker, These Colours Don’t Run exerts a huge emotional pull: a tribute to the bravery of soldiers on active service, but also a subtle salute to the devotion and loyalty of the band’s colossal global fanbase. Brings a tear to the eye, doesn’t it?

Iron Maiden have written a lot of songs about war. They’re really fucking good at it. But seldom have the British legends obliterated the narrative bull’s-eye with quite such power and panache as on this exhilarating slab of hair-raising melodrama. Masters of dynamics, they negotiate the transitions from unsettling restraint to all-out bombast with customary ease, but Paschendale’s chief selling point is the laudable humanity at the heart of this tumultuous tale from the battlefield. No one else comes remotely close to Maiden when they’re on this form.