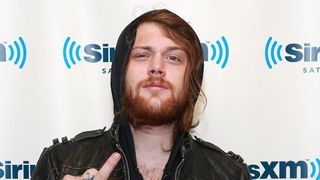 In our regular feature Thinking Out Loud, we find out what’s going on in the minds of the great and good. This week, we peek inside the brain of newly reinstated Asking Alexandria vocalist Danny Worsnop…

“I have the belief that once I’m satisfied, I’ll never go any further or get any better. I can never be satisfied, which means I can never be truly happy because I always feel like it’s never enough. But it keeps me moving and gives me a reason to wake up in the morning.”

“Steven Tyler definitely influenced my life, and not just musically. He’s made an impact on my fashion style, my mannerisms and the way I talk and move, especially onstage. I’ve always had a certain affinity with Aerosmith. It’s a connection that’s been there since before I can remember. They were the first band I ever heard… the first song I heard was Love In An Elevator, and since then they’ve been a great influence on me.”

“The first time Asking Alexandria played the Whisky in Los Angeles, I went up on the first song and tore all the ligaments in my ankle. I did this big jump at the beginning and on the first note, I rolled my ankle. I finished the show and then went straight to hospital, where they hooked me up with a nice amount of Vicodin. I went straight to a house party and got fucked up. That was my initiation to Los Angeles. It was always going to become a very dangerous place for me – a very sinful environment – and I was okay with that. Very much so.”

“I had a house in Beverly Hills for a couple of years – but the neighbours didn’t like me very much. We didn’t sleep and the music was loud, and at any given time, like, 40 people would be in the house, going crazy, throwing stuff off balconies… Lots of women, lots of drugs and lots of drinking, not a lot of sleeping and a whole lot of fucking and then a whole lot of denying it all the next day. It got even worse after reading The Dirt. That was the worst decision we could’ve made. Anything seemed possible.”

“Music is just always something I’ve wanted to do. I think, probably, from around the age of three, which is when I first started hearing albums, appreciating music even before I was playing music. It’s always been inside me, I grew up on The Rolling Stones and Aerosmith. I just haven’t had the opportunity to get it out, mainly through not having anyone to do it with. Even though the opportunity wasn’t presented to me, it got to the point where I was like, ‘Screw it, I’ll make my own opportunity, then’.”

“When I was walking onstage with Asking Alexandria in a bunch of fur and a cowboy hat, some people were like, ‘What’s going on? Is this supposed to be sarcastic?’ No, this is just me. Sorry guys. ‘You’re in a heavy metal band. Dress like this!’ No, I’m gonna dress how the fuck I want and go: ‘YEEEAAAHHHH!’”

“I’ve never woken up in a dumpster at all. I’ve had sex in some, though.”