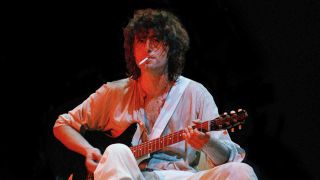 A better idea on paper, perhaps, than it eventually proved to be musically, the teaming up in 1984 of Jimmy Page and Paul Rodgers as The Firm succeeded unequivocally in at least one regard: it got Page out of the personal and professional rut he had mouldered in since the demise of Led Zeppelin four years earlier (triggered by the drink-related death of drummer John Bonham). Or, as Jimmy put it to me not long after the band dissolved in 1986, The Firm was what “saved” him.

In fact he had been racked with doubts about forming any sort of band after Zeppelin. “Oh, well, obviously,” he said. “I was shattered at the time. I lost a very, very close friend.”

Indeed Page’s retreat into darkness in the early 80s had alarmed friends so much that they feared he might never recover. There had been the cobbled-together soundtrack album for Michael Winner’s Death Wish II movie, and a shaky one-off appearance at the 1982 ARMS charity concert at London’s Albert Hall, playing an instrumental version of Stairway To Heaven.

There had also been occasional unannounced cameos with old pal Roy Harper. But it wasn’t until Rodgers met up with Page on the US leg of the ARMS tour in ’83 that the lights slowly began blinking back on again. Free had been blues-rock contemporaries of Zeppelin’s in the late-60s. Bad Company had been Zep’s Swan Song labelmates and the only other major band Zeppelin manager Peter Grant ever worked with. Above all, Rodgers was one of the few people Page still felt comfortable around in those woe-begotten days.

“I believe the first time I met Jimmy was at the Swan Song office on Kings Road,” Rodgers says now. “He was friendly and supportive. We often crossed paths out on the road in the US and the UK. I remember one particular night playing at the Rainbow in Finsbury Park and the entire Zeppelin band came up for a jam. That was a wild night.”

With Rodgers also “still recovering” in the early 80s from his acrimonious split with Bad Company, “Paul was one of the few people that could probably relate to what I was going through,” Jimmy would later tell me. The result was The Firm, a four-piece also featuring ex-Uriah Heep drummer Chris Slade and former Roy Harper bassist Tony Franklin – both late replacements for original choices: former Yes drummer Bill Bruford (then under contract elsewhere) and fretless bass session star Pino Palladino (unwilling to give up his steady gig with Paul Young).

Although they had the same name once given to the infamous Krays’ gang, there were no heavy-duty ambitions for The Firm, beyond Page’s desire simply to “get out and play and just really enjoy ourselves”. Or, as Rodgers would tell me more than 20 years later: “It was a vehicle, as much as anything, to help Jimmy get back on his feet, musically.”

This it most resoundingly did, although critics struggled to get a handle on either of the band’s two albums: The Firm (1985) and Mean Business (1986). They were recorded at Page’s own Sol Studios in Cookham and featured an impressive range of original material, although both were criticised for the much blander, funk-tinged sound they produced than what might have been expected from the recent leaders of Led Zeppelin and Bad Company.

“Well, with The Firm I think there were guitar parts [more redolent of Zeppelin] within the songs,” Page said. “Say, for instance, Live In Peace, a keyboard number that Paul wrote.” But “the guitar only needed to come on in sections on that”.

Both men also refused to perform any of their older, signature songs live with The Firm, which resulted in them touring Europe for the first time with a two-hour set of unfamiliar material.

“And yet there wasn’t any shouting for any numbers from either camp, from Bad Company or Zeppelin,” Page insisted.

There were other echoes of their musical past that could be detected, though. Most notably Midnight Moonlight, the number which closed their first album, It had started life some years before as the famously unreleased Zeppelin magnum opus The Swan Song, but Robert Plant had reputedly refused to sing it.

Similarly, The Firm’s version of the Righteous Brothers’ You’ve Lost That Loving Feeling had also been slated as a possible Zeppelin track. Live In Peace (from Mean Business) was a slower, more bluesy version of a track from the 1983 Rodgers’ 1983 solo album Cut Loose.

Ultimately, neither Firm album set the world alight, though both, predictably, made respectable showings in the US album chart, and the single Radioactive reached the US Top 30. Box-office business for their various US and European tours was also brisk.

But when, in the summer of 1986, on the completion of another dollar-rich American tour, they decided to call it a day, few tears were shed. Chris Slade went on to drum in AC/DC and Asia, Tony Franklin teamed up in guitarist Jon Sykes’ post-Whitesnake outfit Blue Murder, and both Page and Rodgers went on to being… well, Page and Rodgers.

“I didn’t want to get knocked into an album-tour-album situation,” Page told me, “the way it would have gone from that point in time. I wanted to start branching out with some of my own ideas.”

The fact that Robert Plant was also then secretly holding out the – as it turned out, ultimately futile – hope of putting Zeppelin back together with drummer Tony Thompson also had its bearing on the situation, presumably.

According to Rodgers, though, The Firm had only ever been built to last for two albums. “By the end, I felt that Jimmy was up and running and in great shape – he was in fantastic form. And I sort of thought, ‘Well, job done’, really. We left it on a high note, thinking, ‘Well, we’ll come back at some point and do something’. But we haven’t actually done that. Maybe we will, who knows? It’s always on the cards."