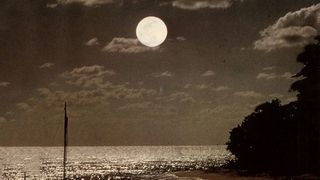 Ask Ian McCulloch what he thinks is the greatest song of all time and the response is unequivocal. You might expect it to be something by one of his heroes – Bowie, Lou, Velvet Underground, Leonard Cohen maybe. But no, it’s one of his own. “No one else has a song like The Killing Moon, not even Bowie,” he says, with the typical immodesty that’s been a hallmark of his 35 years fronting Echo & The Bunnymen. “It’s more than just a song, it’s about everything in life.”

Unlike 80s contemporaries U2 or Simple Minds, whose blustery stadium rock seemed ready made for the US market, the Bunnymen were much more ambiguous. The Killing Moon served as a major statement of intent by the Liverpool quartet. Released in January 1984, it was a haunting song fed by Les Pattinson’s ominous bass pattern, the clever use of strings and a voice thick with portent. McCulloch’s cryptic lyrics imbue it with the same sense of yearning as a Jacques Brel torch song. The Killing Moon was breathtaking.

It was a fruitful time. The previous year had seen the band’s stock rise on the commercial front, scoring their first Top 10 hit single with The Cutter and following up swiftly with Porcupine, the third and easily most successful album of their career so far. Factor in another hit single, Never Stop, and the world’s enormodomes seemed theirs for the taking.

Yet by the latter half of ’83, the Bunnymen were deliberately going the other way. A brief tour of Iceland and Denmark preceded a curious swing around the Outer Hebrides, before they finished up at the Royal Albert Hall. They also stopped off at the Royal Shakespeare Theatre in Stratford-upon-Avon, where McCulloch, in a twist of Lennon, declared the band “more popular than Henry the Fifth”. It was at the Shakespeare Theatre that they first unveiled The Killing Moon.

“One of the reviews afterwards said: ‘Something wonderful this way comes,’” McCulloch recalls. “I remember thinking: ‘He’s got it right!’ We knew what we had was very special, we were at the peak of our powers as a group. Everyone else was wearing cowboy hats and playing stadiums, and we were rocking the cobbled streets.”

McCulloch is at least humble enough to thank God for his part in The Killing Moon. He woke up one morning to find the words ‘Fate, up against your will’ lodged in his head: “It was in me and [ex-wife] Lorraine’s first house. I never wake up that lively, but I just sat up and the words to the whole of the chorus were there. God should get a songwriting credit on it because it felt like it was divine. So I grabbed a guitar and started working out the rest.” Prior to decamping for Paris to record Ocean Rain that November, the Bunnymen went into Crescent Studios in Bath for The Killing Moon. “We were really into Scott Walker records and [Love’s] Forever Changes at the time, so we wanted to make some sort of grand work,” explains guitarist Will Sergeant. “Like with a lot of our stuff, we were trying to avoid the current trends in sound. I knew that I didn’t want it to sound like U2, that was the main thing.”

The distinctive, vaguely Spanish-sounding guitar intro on The Killing Moon was a happy accident, Sergeant reveals. “It was just something I did when we were tuning up. Then we went out for a curry and when we came back, producer David Lord had looped it up and punched it back in. We all thought it sounded great. I spent the next 20-odd years trying to remember how I did it.”

It wasn’t all so smooth, though. The tune itself just wasn’t coming together.

“David Lord was a load of crap and a tosser, the most unaptly named bastard you could meet,” says McCulloch. “It was all going wrong so I went to the boozer with Adam Peters. I was thinking that when we got back we should maybe try a Velvets tom-tom thing, do a Mo Tucker on it. So I came back a little freer about what I had to say. Then I got a bad cold. The others suggested I re-sing it when we got back to Liverpool, but I said: ‘I’m not doing it. It’s ruined.’”

Not only is McCulloch on killer form on the track, but Sergeant is inspired too, conjuring up an atmospheric middle eight and one of the most expressively beautiful codas you’ll ever hear. “I knew that it was the greatest song already,” McCulloch marvels, “but Will’s outro guitar is unbelievable. It’s incredible where he goes. It’s total artistry and the ability to know exactly what’s right for that song.” The Killing Moon rose into the UK Top 10 and stayed in the chart for six weeks. Three months later came parent album Ocean Rain, a sumptuous record whose dark metaphors were given grand scale by a 35-piece string section. Their biggest seller to date, it’s often cited as the Bunnymen’s masterwork.

“I would have loved Sinatra to have had a go at The Killing Moon,” McCulloch confesses. “One of the great things about the song is that it still surprises me when I sing it live. I think it took me 25 years to realise that not only was it about pre- destiny, it was about everything. You can slice that lyric up wherever you like, but it’s as profound as ‘To be or not to be…’ It’s almost like a soliloquy delivered by a priest. That song is actually the answer to the big question. It’s got real power.”

As well as being covered by Pavement and Grant Lee-Phillips, The Killing Moon was on the soundtrack of Richard Kelly’s surreal 2001 flick Donnie Darko. And a mysterious presence in a crazy rabbit suit – a mad bunnyman, in effect – was one of the film’s key characters.

“I’d mentioned somewhere that The Killing Moon was about pre-destiny,” says Ian McCulloch, “and he wrote the whole fuckin’ film about it. Cheeky bastard! He gave us this pittance one-off fee for the use of the song, saying it was just a little indie film, but forgot to mention that Drew Barrymore was behind it, who had more money than Howard Hughes. Great as it is, he should at least have given us a credit for the idea.”