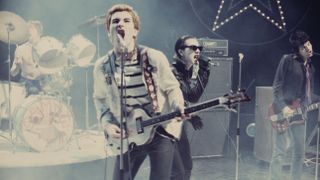 The Damned on stage in 1977 (Image credit: Getty Images)

As you may have noticed if you’ve ever been to Rebellion Festival or Punk Rock Bowling, it is possible to spend an entire weekend listening to classic punk tunes without ever having to listen to the same song twice. Hell, you could play punk rock all week with the same result and not even have to go near the Sex Pistols or The Clash! But while both those bands are rightly considered to be giants of the genre, instigators and innovators, there are literally hundreds of punk records that never got the recognition they deserved, either rubbished by the press or completely ignored, occasionally praised but selling no more than a handful of copies. Contrary to popular opinion, Never Mind The Bollocks and London Calling were not the only important albums in punk.

Here, then, we find ten of the most underrated UK punk albums, each one a classic in its own right, and each one woefully neglected, or perhaps only known to a handful of spiky-haired fans. Admittedly, some of these records were hits at the time, but they’ve either been forgotten or failed to receive due credit. As such, this list could have been a great deal longer, delved deeper into obscurities, and might have gone on forever if we’d included bands who only released singles. Maybe next time… Until then, crank these up loud!

10) Peter And The Test Tube Babies – Pissed And Proud

Putting out a live record as your first full length effort could have been a disaster for many punk bands, especially those who couldn’t play very well, but aside from being great musicians, Brighton’s Test Tube Babies were, as the title suggests, all about getting pissed and having a good time. You can almost smell the cider here as they launch into the hilarious Moped Lads (“If you hit ‘em they tell their dads”), followed inevitably by Banned From The Pubs, and the banter between songs lets you know exactly what to expect from their gigs – namely cider, shouting, and bad jokes. There’s even a cover of the disco hit Oops Upside Your Head, changed, of course, to Boot Wrapped Round Your Head. All very silly, and all very special.

Discharge meets GBH and Motörhead at an anti-Nazi demonstration after drinking cider all afternoon in a Hackney squat. As you might imagine, London punks Defcon Zero pull no punches with their in-your-face racket, every song faster and more vicious than the last, every lyric spat out like a rabid pit bull going for the throat. Among the standouts tracks here are Welcome To London (“welcome to Hell”), We Want Blood, Get To Fuck, and the glorious Nick Griffin (“you fucking cunt”) about the former president of the British Nationalist Party. Their bass player goes by the name of Seamus O’Hooligan and used to play in a band called Throw Bricks At Coppers.

The UK Subs are underrated, period. Formed in 1976, and with an incredible 26 studio albums to their name, each named after a consecutive letter of the alphabet, they’ve been slagged off by Johnny Rotten – who, if memory serves described them as “awful” – and largely ignored by mainstream media, but they’re still going strong. Admittedly, frontman Charlie Harper is finally getting some well deserved recognition with all the 40th anniversary of punk hullabaloo, but the chances are you’ve never heard this fine album, containing such gems as Let’s Get Drunk, the reggae inspired Solutions, or the brilliantly blunt Nazi Cunts. If you like this then there’s another 25 albums to check out.

7) Blitz – Voice Of A Generation

Leaving the whole Oi! debate aside, (the Blitz line up consisted of both punks and skinheads) this debut album of 1982 from the Manchester band was everything fans expected after the ferocious All Out Attack EP of the previous year, a fantastic work from start to finish. Indeed, by rights, Blitz should have been included on our recent list of top UK82 bands, so let’s make up for it here by saying that Voice Of A Generation is a classic that brings to mind Slade playing Cockney Rejects’ finest tunes. Unfortunately, Blitz shows were plagued with horrific violence, and the band lost their way on the second album, but if it’s truly vicious street anthems you’re looking for then your search is over.

Although Essex anarchists Crass are hugely respected and easily one of the most influential punk bands of all time, they make our list of underrated albums for the simple reason that their music was often dismissed in favour of their message, when the simple fact is that that message wouldn’t have been so nearly powerful if the music wasn’t so good. Granted, the songs were frequently more basic than the need to eat and shit, but as you’ll find here with the likes of Do They Owe Us A Living, Banned From The Roxy and So What, they were also vehement, brilliantly anthemic, and, in songs like Asylum, downright scary.

According to one retrospective review found on the font of all bollocks, Wikipedia, 999’s self-titled debut album “lacked that special ingredient, uniqueness or originality to make it stand out from the crowd”. But 999 were nothing if not unique. For starters, frontman Nick Cash offered a high-pitched sneer that sounded like no one else, but more than that, the band played at wildly varying tempos, from the grinding crawl of Emergency, to the blisteringly fast No Pity, and all points in-between. Granted, the band lost their edge for a while, seemingly trying to pander to the US market, but this first album (especially with the bonus tracks Nasty Nasty and My Street Stinks) is both original and outstanding.

Further proof, if ever it were needed, that music critics don’t know what the fuck they’re talking about (except this one, obviously). Released in 1978, The Vibrators second album was dismissed as “pretentious and overblown” and “nothing but cheap thrills”, but is, in fact, a classic that’s more than stood the test of time, thanks in part to the excellent production job by Vic Maile who would go on to produce Motörhead’s Ace Of Spades. Later inspiring The Exploited not only to cover the track Troops Of Tomorrow but to name their second album after it, V2 is quirky in places, poppy at times, and often completely psychotic. Sometimes all at the same time.

Given that the Guardian newspaper referred to Sunderland’s Leatherface as “the greatest British punk band of the modern era”, and that Mush received unanimously glowing reviews, – as did most of their records – it’s perhaps not true that Leatherface were underrated, but there’s still a strong chance that many readers have never heard of them. Which is fucking disgraceful, frankly. Often described as a cross between Husker Du and Motörhead, they were capable of melancholy beauty, sadness, and rage in equal measure, gravel-throated frontman Frankie Stubbs pouring his soul into every song. Just listening to it now gives me chills. Brilliant.

The loss of Ruts frontman Malcolm Owen to a heroin overdose on July 14th, 1980, was to punk rock what the loss of Kurt Cobain was to grunge, and this The Ruts debut album, released in 1979, is every bit as important as Nevermind to the history of rock music. Henry Rollins has given praise in his spoken word show, and did a remarkably great job as The Ruts frontman in July 2007 at a London benefit show for guitarist Paul Fox, who passed away three months later from lung cancer, but, sadly, outside punk circles the band remain virtually unknown – particularly in the US – when, by rights, the likes of Babylon’s Burning, Something That I Said, and the reggae infused Jah War should be household names.

1) The Damned – Music For Pleasure

While there is no question whatsoever that The Damned’s first and third albums (Damned Damned Damned and Machine Gun Etiquette) are stone cold classics, their second album, Music For Pleasure, remains largely overlooked, even by the band themselves. Produced by Nick Mason of Pink Floyd – which was pretty out there for a ‘77 punk record – it failed to make the charts and has been critically panned over the years, one review bluntly suggesting that it doesn’t live up to its name. Which, frankly, is bollocks, because from Problem Child through One Way Love to Stretcher Case, Creep (You Can’t Fool Me), and the Stooges inspired closer You Know, Music For Pleasure is an absolute scorcher. Damned good.

Has the true spirit of punk gone up in flames?

The 10 best punk rock singles, by The Undertones' Michael Bradley