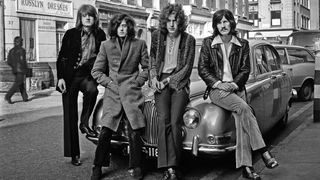 Once again Led Zeppelin find themselves battling allegations of copyright infringement, this time over who wrote the introduction of their most famous song, Stairway To Heaven.

It’s a scenario that’s become familiar since 1985, when Willie Dixon launched a legal case over Whole Lotta Love, claiming that the song copied his own You Need Love - written seven years earlier - without giving him a songwriting credit.

Since then, several other songwriters have instituted legal proceedings against Zeppelin, alleging that the band have used their songs without credit, often claiming the songwriting credits for themselves.

It’s a saga that goes back to the band’s beginnings, when they had a somewhat swash-buckling attitude to songwriting credits. The general public were unaware of the more obscure songs Zeppelin appropriated for their own ends, but the blues community soon began to raise its eyebrows, particularly when Sonny Boy Williamson’s classic harmonica blues Bring It On Home on Led Zeppelin II was brazenly credited to Page and Plant.

The intimidating spectre that Zeppelin cast over the music business in the ‘70s (which, it should not be forgotten, helped to ensure that they and other successful acts were paid what they were worth rather than what record companies and promoters thought they could get away with) discouraged most people from tangling with them. Hence Willie Dixon’s 16-year wait before issuing legal proceedings (although he claimed he was unaware of Whole Lotta Love until his daughter played it to him).

Below we examine the Led Zeppelin songs that have been challenged by songwriters claiming credit, and look at others that have come under the microscope.

Songs where the credits have been changed

In 1967 the Yardbirds with Jimmy Page played the Village Theatre in New York, supported by folk singer Jake Holmes, who’d just released his debut album, The Above Ground Sound Of Jake Holmes. Bass player Chris Dreja remembers Page coming back to the hotel with a copy of the album and enthusing over the track Dazed And Confused. The Yardbirds worked up the song and added it to their set, and a live version showed up on a Yardbirds album, Cumular Limit, in 2000, credited to “Jake Holmes arr. Yardbirds”

The song was reworked with new lyrics for Led Zeppelin’s first album and credited solely to Page. In 2010 Holmes began legal proceedings over the copyright of the song. An out-of-court settlement was reached in 2012. No details have been revealed but the credits now read “Jimmy Page, inspired by Jake Holmes”.

This song was passed around the US folk scene in the early ‘60s before arriving at Joan Baez, who opened her 1962 In Concert Part 1 album with it. It was credited “Trad arr Baez”.

This was the version Page played to Plant when they worked up the song for Led Zeppelin’s first album, where it was credited “Trad arr Page”. Many years later it turned out that the song wasn’t “Trad” when the composer, Anne Bredon, stepped out of the shadows. At which point both Baez and Led Zeppelin changed the credits accordingly.

In 1985 Willie Dixon sued Led Zeppelin, claiming that Whole Lotta Love plagiarised his own You Need Love, which was released as a single by Muddy Waters in 1962. Following an undisclosed out-of-court settlement Dixon’s name was added to the credits although, interestingly, Dixon did not pursue the Small Faces whose 1966 song You Need Loving was even closer to his original. But, unlike Whole Lotta Love, You Need Loving did not sell millions of copies.

Meanwhile, Albert King might also claim that his song The Hunter was slightly more than sampled during the middle part of Whole Lotta Love. Well, he might if he was still alive.

While he was at it, Wolf got himself added to the credits of The Lemon Song as well. Compare and contrast the arrangement of Zeppelin’s The Lemon Song with the Wolf’s Killing Floor.

Bonus facts: the origins of lemon squeezing go back into the mists of time via Robert Johnson’s 1937 classic Travelling Riverside Blues, and via Arthur MacKay, who recorded She Squeezed My Lemon in the same year.

Bring It On Home

One of the most flagrant examples of song theft. OK, Page and Plant can claim that they were responsible for the song’s dramatic, metallic switch in the middle, but the beginning and end faithfully copy Sonny Boy Williamson’s blues classic. Because there was no case to answer, composer Willie Dixon has been listed on the credits since 1972.

How Many More Times

Next up was Howlin’ Wolf, or his estate. It’s hard to decide whether How Many More Times owes more to How Many More Years or No Place To Go, but both were written by him under his real name, Chester Burnett, appearing on his 1959 album Moanin’ In The Moonlight. He was added to the song’s credits in 1993.

The one that’s going to court

Spirit and Led Zeppelin played together several times during 1969 when this instrumental, Taurus, featured in the former’s set.

Spirit leader and composer Randy California had no doubt that he was “ripped off”. In an interview shortly before his death in 1997 (drowning while trying to save his son) he said “The guys made millions of bucks from it and never said ‘Thank you’, never said ‘Can we pay you some money for it?’ It’s kind of a sore point with me. Maybe someday their conscience will make them do something about it. There are funny business dealings between record companies, managers, publishers and artists. But when artists do it to other artists, there’s no excuse for that.”

However, California never took any legal action against Led Zeppelin while he was alive. 19 years after his death, his estate has. The trial starts on June 14.

The Taurus case documents also list a number of other songs where the original authorship has been the subject of debate. Listen and decide for yourself…

Led Zeppelin - Since I’ve Been Loving You | Moby Grape - Never

Led Zeppelin - Hats Off | Bukka White - Shake ‘Em On Down

Where does “Trad” fit in?

In My Time Of Dying

Blind Willie Johnston was one of many who performed In My Time Of Dying. The songwriting credit on Zep’s version reads, “Bonham, Jones, Page, Plant”.