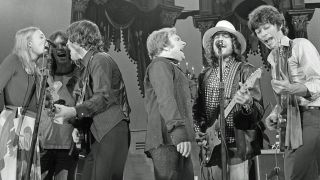 Words like 'legendary', 'iconic' or 'seminal' tend to be thrown around far too liberally in rock, but all three define a concert that took place in San Francisco more than four decades ago. The Band, erstwhile collaborators when Bob Dylan “went electric” who subsequently made their own mark on the music world, bowed out with a star-studded farewell show, billed as The Last Waltz.

The mammoth shindig at the Winterland Ballroom on Thanksgiving Day, 1976, continues to grow in stature, thanks in no small part to director Martin Scorsese’s vibrant documentary, one of the best concert movies we’re ever likely to see.

This being a final curtain kind of affair, a couple of guest appearances were to be expected, but the sheer number and calibre of friends and fellow players who showed up was nothing short of remarkable.

For the first hour of the gig, in which The Band rattled through their choicest back pages, from the opening Up On Cripple Creek to the jaunty Rag Mama Rag, there was little in the way of clues as to what would happen next. Then a tidal wave of famous folk rolled across the stage to give their buddies a suitably joyous send-off.

Old boss Ronnie Hawkins was first up to bat, growling through Bo Diddley’s Who Do You Love?, closely followed by Dr John, Muddy Waters, Eric Clapton (a fiery Further On Up The Road), Neils Young and Diamond, Joni Mitchell and The Staple Singers.

The bar was raised even higher with Van Morrison’s soulful six-minute rendition of Caravan, before the arrival of a man most of the five-and-a-half thousand punters were increasingly hoping to see.

Bob Dylan stayed for five songs, cutting a lean groove on Baby Let Me Follow You Down, and made his exit a half-hour later after leading a massed choir that included Ringo Starr and Ronnie Wood through I Shall Be Released.

But ultimately it was The Band’s party, the parade of (mostly) better-known musicians serving to illustrate the importance of the group and the impact they’d made on western music.

The following pictures perfectly capture an unforgettable night, a genuine (not to mention legendary, iconic and seminal) event.