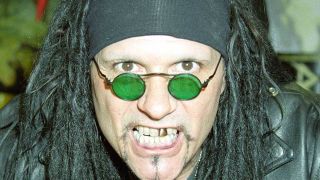 We all know rock stars like to party, but few come close to Ministry’s Al Jourgensen, who has taken chemical debauchery to new levels. Welcome to his world.

My favourite heavy metal bands were Black Sabbath and Motörhead

I had already heard the first three Black Sabbath albums, but by the time they got to Vol. 4 I was like, ‘OK, this is the shiznit, man.’ The first four or five Motörhead albums were over the top for me at the time, too. As soon as I heard that band I was like, ‘Goddamn, I just wanna break into someone’s apartment and steal their shit.’ And that’s why my pet dogs are named Ozzy and Lemmy.

It was the night Killing Joke opened for Ministry. After the show I went back to my loft, shot up and that was the first time I was clinically dead. Some people started pounding my chest and calling paramedics. Then someone with a defibrillator shouted, ‘Clear!’ and blasted me a couple times. The next thing I knew I was just pissed off that the guy who sold it to me didn’t tell me it was that strong. I did my usual amount, but I went down like a weed-whacker, man.

When I first met William S. Burroughs I shat my pants

The first thing he did was ask me for heroin. He wouldn’t stop talking about these raccoons that were eating his petunias, and said he’d try to shoot them but all he had was an air rifle because he wasn’t allowed to own a gun ever since he accidentally shot and killed his wife playing William Tell. So I suggested he leave crackers dipped in methadone for the raccoons to eat and then shoot them. Well he did it and it worked. I’d never seen him so happy. That guy didn’t live like a human living. He had no idea about who was President or who was in Congress or what was going on in the news or sports – he just lived as Bill Burroughs. He had no relationship with society as we know it because he wasn’t interested. That made a big impact on me.

I started taking hard drugs because I hated everyone

I hated my parents and all the kids and teachers at school. It’s not sustainable, but it got me through some tough periods. Being popular was stressful. I’m a misanthrope. I don’t like people. I didn’t like kids in the pit banging into one another, and I didn’t like the people throwing bottles and coins at me when I played. But I’m good at dodging things so I’ve hardly ever been hit by anything.

I bought a giant firework at a truck stop and I lit it on the bus as a joke, but I couldn’t snuff the wick. We passed it back and forth like a hot potato until it exploded. The driver pulled the bus over when it was on fire and called the police. You can take all the groupie stories you want and all the crazy chicks sticking weird objects up their pussies and still nothing compares to setting a bus on fire while it’s rolling down the highway.

Timothy Leary once gave me a random drug to inject

I don’t know what the name of it was, but he got it from some college and they wanted to test it up. I just remember shooting up in his kitchen and instantly the kitchen ceiling dissolved and I saw the night sky. Everyone was talking in slow motion except Tim, who was running faster than a fucking greyhound, taking notes on how I was reacting to this drug. That shit lasted for two days. And the trip see-sawed back and forth from pleasant to a total nightmare, with flames coming out from the floor and spiders falling down from the sky. It was endless. When I finally got clear I was like, ‘What the fuck happened? I don’t know what that drug is, but I hope it hits the streets soon. The pharmaceutical companies will have a blast with that one.’

We started out with throwing fire crackers in his bunk on the tourbus. He was kind of grumpy about it, but he didn’t freak out. Then I threw an M-80 [firework] in there and he went flying out of there half on fire. Later I roofied him when we were in the studio and shaved his head while he was passed out. I was actually gonna shave his eyebrows off as well, but he came to after I had only finished one eyebrow. He was kinda mad about that but I have nothing but good things to say about Trent.

When I first heard Mikey [Scaccia] had died, I collapsed

Sammy, my engineer broke into my man cave at about 2:30 in the morning and he was white as a ghost. He said, ‘Dude, you better sit down.’ I went, ‘Fuck you, just tell me what’s going on.’ He told me, ‘Mikey’s dead.’ Well, I should have taken his advice and sat down because I hit the ground and went into a complete foetal position. It was pretty heavy, man.

They were drinking my beer and told me to fuck off, so I dropped my trousers, shoved the vegetables from the deli tray up my ass and chased them around trying to rub my ass carrots on them. They freaked out and left. When Ministry was on Lollapalooza, Ice Cube started drinking my fuckin’ beer before we got offstage and then bitched about the kind of beer we had. So I stripped naked and started rubbing my cock on him, which he didn’t like. I thought his bodyguard was gonna beat my ass, but he was laughing so hard. It was the funniest thing he had ever seen.

We needed money. Fred offered me a suitcase full of money to produce a song for him. I accepted it, but I felt like a total sellout. So I drank three bottles of wine just on the ride over and even more while I was in there. He wanted to do a song about crack addiction but he wasn’t a crack addict. He wanted to sound like Ministry so I brought all my Ministry patches in and he still didn’t sound like me. He was getting frustrated and started blaming my equipment. So I said, ‘Why don’t you drink a bunch of shit, get naked, put on my cowboy hat and yell. Channel your inner-Ministry.’ He couldn’t pull it off, so he left, but I kept the money.

When I did it I knew I would never be employable for any line of service ever again. Even McDonalds probably wouldn’t hire me. People are like, ‘Come on, you were a huge rock star,’ but honestly I never saw the money trail. They just gave me enough money for coke and heroin and liquor every day for years. They bought me off with that. It reminds me of the Europeans buying Manhattan for trinkets. I didn’t ask, I didn’t care. I was wasted and I had groupies.