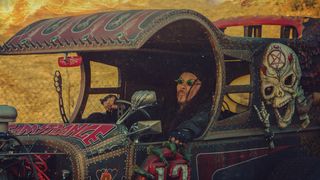 Al Jourgensen isn’t just known for taking things to the extreme musically, but physically too. Of his 57 years on this planet, he spent 18 of those as a junkie while smoking, drinking, snorting and injecting almost every other substance known to man as he travelled around the world with his industrial wrecking machine, Ministry. Now, he’s coming up on 13 years clean after following the advice of late bandmate Mike Scaccia: “Dude, just do shit until it makes you sick.” Al eventually kicked his heroin addiction because he lost everything. “I was penniless, broke, done. Everyone disowned me. I think Paul [Barker, Ministry bassist from 1986 to 2003] was auditioning singers. They pretty much knew I was gonna die; everyone distanced themselves from me. I got a divorce, I was estranged from my kid… I pawned off everything I owned and that was it. I’ve never looked back.” Having seen life from both sides of the needle, then, and back making music with the intriguingly named Surgical Meth Machine, we asked Al about his experiences with drugs. Hold on tight…

“I had my first cigarette at 10 years old and was smoking a pack a day by the time I was 15. It’s the worst drug in the world – and it is a drug, in the most insidious way. It’s like coke as far as I’m concerned. Nicotine addiction isn’t like an opiate addiction where you really feel it when you don’t have it; nicotine you keep doing because it’s there. When I finally go and the doctors poke around my body wearing hazmat suits, they’re gonna find the worst thing of all was the cigarettes. It’s even easier with e-cigs. If I smoke over a pack, I have my e-cigarette, so I’m actually getting more nicotine than I was before!”

“During my 18 years as a junkie, alcohol was not really part of the picture. I’d drink some Bushmills whisky, but I’d drop a hit of acid in it and make it a party in a bottle. Then my liver went and I got these ulcers where I started bleeding; I was throwing up blood every day and it was from the alcohol. Then the ulcers exploded and I died again – for the third time I was clinically dead and I had to be resurrected [Al’s first brush with the Reaper was a drug overdose on New Year’s Eve 1992]. I’m fucking Lazarus on steroids now. I still drink, but I haven’t had hard liquor in years. I got in a fight with a biker gang at a bar because they bought me shots and I wouldn’t drink ’em. Not drinking was not beneficial to my health that night!”

“This is one thing that old Uncle Al’s never been into. You have to remember, having a junkie’s mentality, you want instant gratification, so I used the needle for 18 years. The whole pillpopping shit is the stupidest fucking thing in the world. If you have to wait an hour, an hour and a half to figure out if you’re gonna enjoy yourself that night… what a dumb drug, man!”

“I think I smoked pot 10 times up until two years ago when I moved to California again and got my weed card, and now it’s my go-to girl. That’s what keeps me sane – this wonderful selection of weed with goofy names they have at all the dispensaries here. That’s basically all I do at this point – beer and pot. I used to complain on the tour bus if anyone smoked pot – ‘I hate that shit, it smells like my grandmother’s fucking cupboard!’ Then, just to pass the time of day, and because it’s legal out here, I said, ‘Fuck it.’ On the new Surgical Meth Machine album I have a song called I’m Invisible, and it’s about me receiving clearance to get medical marijuana.”

“I lived with [American psychologist and psychedelics advocate] Timothy Leary for two years, so enough said there. He’d get vials of pure LSD sent to him for, ahem, research, ha ha. I was his research subject for two years. I’ve injected pure LSD, pure MDA, and that’s a trip because you’re at the peak of your trip in 15 seconds so there’s no foreplay. I got a lot out of it, I got really good insights into the way the world works or seemingly the way I think the world works. But it gets to the point whereyou’re not making any gains and you can’t possibly do LSD or any psychotropics or peyote on a consistent basis and deal with the grind of reality. You have to choose your spots. I’d recommend not using it in spots that you know you have to play society’s game… I’ve seen the possibilities of LSD. Unfortunately, we’re living in a world that is constrained for an open mind; it’s a very closed society thinking-wise.”

“It’s a tranquilliser like lot of these prescription things, but it has psychedelic tendencies, which is a pleasing thought for the dogs and cats we put down with it. At least when they’re going down they’re having crazy-ass, wild fucking dreams. In a sense, ketamine is comforting to me, knowing our animals are getting wasted before they die. However, that’s dog and cats… not fucking humans, alright? It’s an animal drug. You kids don’t need to do this shit unless you wanna walk round on all-fours and bark. I don’t eat dog food, I’m not gonna do ketamine.”

“For the last five years I did it, I digressed down to the crack level and you’re married to your fucking crackpipe. I was addicted to it, and I hated it. I really think it’s my least favourite thing of all, and I did it for 15 straight years and was a day-to-day large-quantity user for at least 10 of those. You’re told it’s not physically addictive but it calls to you. Coke gets into your brain, you start dreaming of crack and shit like that, and every so often now it seeps into my dreams and I wake up like, ‘Oh shit, did I just do that?’ I hate that fucking drug, I think it’s evil. Coke is the worst of all of them by far.”

“The high is more intense on crack and it leaves you faster, too. But they package it cheaply – you’re getting a five-dollar, 10-dollar rock or something, which is cheaper than coke and you don’t get nosebleeds all night, but in 15 minutes you’ve got to have another one. There’s no respite, no sleep. At least with heroin you get to sleep and have crazy dreams, but with crack it’s all-encompassing and it won’t let you sleep. It’s the worst. If crack addicts want to unite and picket my shows I’m alright with that ’cause I’m totally dissing ’em. Go ahead and picket, I don’t fucking care. Crackheads unite against Ministry, ha ha! That’d be awesome.”

“Meth and prescription pills are the two demons that have never entered my life. I made up the name Surgical Meth Machine mockingly and derisively. I shot up crystal meth once with Mike Scaccia who liked this shit – I preferred ‘traditional’ highs like shooting heroin and crack cocaine, ha ha! It looked like syrup. Within 15 seconds my eyeballs were the size of my face. I said, ‘I think I’m having a heart attack’, and Mikey, whose eyes were just as big, said, ‘Yeah dude, isn’t it awesome?’ ‘No, it is not awesome! It is fucking horrible. This is the worst thing I’ve ever had in my body!’ I’m sure I had a stroke; my face was frozen for 48 hours on the left side.”

“The entire quest for every heroin addict is to recreate that first time. I spent 18 years trying to get that first time back and never came close. It’s a losing proposition, but after that first time I knew I was hooked right away and I did all the usual shit. For your first time the first thing you do is vomit. It’s similar to your first ayahuasca brewed tea – you’re gonna throw up. But afterwards the universe is open to you and you feel invincible. I understand the allure, but you never find that first-time wonderment again. I felt like the Indiana Jones of opiate addicts on a quest for the holy grail that you already have in your hand. This is a public service announcement from Uncle Al: if and when you do kick heroin, you’ve got to remember it’s forever. I mean that literally. If you relapse, even one time, the majority of people who OD on heroin are relapse victims because you do what you did when you were bangin’ and your body can’t assimilate that.So you die. It’s that simple.”

MINISTRY RETURN TO THE UK LATER THIS YEAR. SURGICAL METH MACHINE’S SELFTITLED DEBUT IS OUT ON APRIL 15 VIA NUCLEAR BLAST