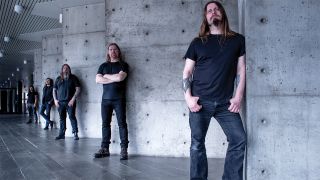 Norwegian progressive metal veterans Enslaved have proven themselves as a band with a taste for reinvention over the course of their 14-album strong career. Starting off life as an extreme metal band in 1991, they’ve drifted over the years to a more conventionally prog sound, and they have no intention of slowing down or looking back any time soon. As the band discuss in the latest issue of Prog Magazine, their latest album, E, marks their proggiest epic yet, filled as it is with stories based on Norse mythology and Viking heritage.

Here, we go back through their career to trace this evolution, and pick out Enslaved’s five proggiest moments to date.

Convoys To Nothingness (from Monumension, 2001)

The beginnings of prog stirrings are here. There’s a real sense of ominous introspection as the song builds to a climactic overload, yet it then moves into more eerily somnambulant scenery. This shows a genuine desire to experiment.

A complex maze of torturous metallic passion coupled to a more dense and atmospheric appreciation that owes much to Van der Graaf Generator. This is an agitating composition that never settles and is always challenging the listener to remain involved.

This is where the band displayed an authority so reminiscent of Opeth. There are sparks of the old Enslaved gruffness, but this is butted up against a colourful ambience that’s evocative yet also claustrophobic. There’s little doubt the band are revelling in their self-imposed artistic freedom.

Folk essence meets psychedelia on a track that gives vent to Enslaved’s desire to push the envelope like never before. This is a stunning cognisance of the way in which nature should be allowed to develop without interference. It’s the soundtrack to a symbiotic relationship between human and animal.

This comes across as if the band have let their imaginations take over and spontaneously created a tapestry of sound. But underlying this is a distinct discipline. Enslaved display a penchant for what jamming on ideas can achieve, but always within a framework, albeit a flexible one. It’s the joy of artistry mapped out within the necessity of focus.

You can read the full story on Enslaved in the latest issue of Prog Magazine on sale now. Buy it directly here or become a TeamRock+ member to read it right now.