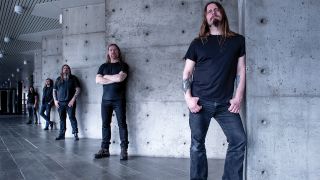 Make a note of the year 2043, because that’s when Enslaved are planning to end it all.

“We’re looking at being in this band for another 26 years,” explains the group’s guitarist and co-founder Ivar Bjørnson. “It does sound daft when you put it like that, but we all just believe that’s when Enslaved will come to a natural conclusion. What that means in terms of albums, I’m not sure. When we get to within five or 10 years of that point, we’ll probably go mental and release a 12-LP box set!”

The Norwegian band, who formed in 1991 – which means by the time they finish, they will have made it beyond their 50th anniversary – have just begun a new thematic cycle with the album E. It takes them into territory that’s philosophically very different from what has been at the core of their previous few albums.

Ever since Vertebrae in 2008, Enslaved have explored the individuality of the human condition on a series of records that have been challenging and linked through a fascination with the darker side of life. Now, however, the band are reaching towards a very different concept. Instead of looking at people as being isolated, with all the subsequent problems that arise from this, they’re examining how people interact with one another.

“Yes, it is a more positive spin,” muses Bjørnson. “And at a time when so many other bands are going towards the dark side, it may seem odd for us to be moving the other way. But things like that never bother us. It’s almost typical of us to go against the trend!”

Enslaved are not a band with a far-reaching vision of where they should be going musically and lyrically. The fact that their last album In Times (2015) was to be the final instalment of their previous thematic cycle wasn’t actually planned out in advance.

“When we did that album, none of us were sure if it might be the end of that era for us,” admits Bjørnson. “It only became obvious when we went out and toured. Then we understood that we had come to the end of that path.”

In their normal fashion, it didn’t become clear to them where to go next until they had written the first song for E.

“That was Sacred Horse. This is about the magical relationship between man and the horse, and how this was used during the Bronze Age, with the carving of horse images. There’s an interdependence which goes back that far. Once we had the song in place, then it became clear that we were being led down this route to a fresh ideology, and that’s when we began to write in a way that dealt with the duality of relationships. It’s the way we’ve always worked. The overall theme – I wouldn’t call it a concept – for an album can come at any time in the process. But once it’s in place, things flow very naturally.”

When Enslaved first got together, they were firmly in the extreme metal category. However, as Bjørnson insists, even back then they had ambitions that lay a lot more in the progressive sphere.

“When Grutle Kjellson [vocals/bass] and I started this band, we were both heavily influenced by prog,” he says. “We loved the likes of Yes, Genesis, King Crimson, Pink Floyd and Rush, and Grutle was also a massive fan of Led Zeppelin. These were the major inspirations for what we wanted to do. King Crimson were especially important to metal fans like us, mainly I think because of 21st Century Schizoid Man.

“However, you have to understand that we were both very young back then: I was just 13, while Grutle was 17. In the early days of Enslaved, we were simply not good enough or experienced enough as musicians to be able to emulate those bands. So in order to get started, we had to look at a different area, and that’s why we gravitated towards death metal.

“When you are as young as we were, it’s not easy to try to incorporate Pink Floyd into your music. It takes a while to discover the best way to take the music forward. But we soon discovered how to do this. We realised that if we stayed in the death metal style then not only was it very restrictive, but it also left us in real danger of becoming a parody of ourselves.

“But black metal offered so much more scope. The great thing about that genre is that you can do anything you want within it. You listen to a lot of the bands who were around the scene in the early 1990s, especially in Norway, and what you hear is music that is hard to put into one category. There are classical influences, folk inspirations and a much more progressive-leaning aptitude. That suited what we wanted to do.”

This ambition was not only fuelled by the band’s own aspirations, but also through the encouragement of one of the most notorious of all black metal icons. Euronymous became infamous in the early 1990s when he was seen as one of those who was inciting the spate of arson attacks on churches in Norway. A founder member of Mayhem, he was murdered in 1994 by Varg Vikernes. But Bjørnson recalls another side to the man whose real name was Øystein Aarseth.

“We used to regularly go into his record shop, Helvete, in Oslo. The main reason we used to do this was to find out what the latest underground metal releases were. But he encouraged us to widen our musical horizons. He would always say to us, ‘Don’t bother with that shit.’ And he’d give us albums from artists like Tangerine Dream and Brian Eno, plus more obscure Scandinavian prog bands. He would tell us to go home and listen to these records as they were far more interesting than the latest extreme metal releases.

“People don’t realise how much Euronymous was keen on the progressive and experimental side of music, but he was a major factor in getting us to stretch ourselves as musicians. The albums he gave us made a big difference to the way we developed as a band.”

By the mid-90s, Bjørnson and Kjellson were beginning to take a lot more musical risks. The former believes they were following a similar path to other like-minded Scandinavian bands.

“If you look at that era, then Opeth, Ulver and Ihsahn were beginning to move away from the more simplistic metal style, taking a more challenging path. We did this as well. What we all had in common was a desire to be different. I suppose in broad terms we all came from that black metal background. But as I said earlier, this was an area of music that was so diverse in itself, musicians were free to explore in their own way. There was a direct connection to becoming progressive, and all of us grabbed the opportunity. It’s not that we all did this at the same time, but we were all developing our individual styles.”

The turning point for the band came with 2001’s Monumension album. This was when it became obvious that they were a different beast to the one that had first exploded into view with 1994’s Vikingligr Veldi.

“I believe the shift towards something more progressive had occurred in 1997 with Eld. But it was with Monumension that we moved away from using blastbeats, and you can hear the progressive influence coming though. By this time, we had absorbed lots of inspiration from a wide range of artists and felt ready to do something more dramatic.

“In some ways, though, maybe we made too much of a jump with that album. There were fans, maybe quite a lot, who didn’t appreciate what we were doing. And we did lose them for a time. But once they had got used to what we were trying to do, they came back. In the long run, I feel our fans accepted where we were heading musically, and now they are prepared to go on this journey with us.

“In truth, I don’t think we have really made revolutionary changes to our sound. What we have done is more evolutionary. With each album we’ve recorded since 2001, there have been gradual alterations. There’s been no reason to go for a big jump. We’re happy with the way everything has gone.”

However, there has been one change in the band’s line-up that has made a massive difference to their philosophy. Keyboard player Håkon Vinje was brought in at the start of this year to join Bjørnson, Kjellson, guitarist Arve Isdal and drummer Cato Bekkevold.

“Our previous keyboard player, Herbrand Larsen, had been with us since 2003. On our last tour, he explained that he was fed up with the nomadic life you lead with a band who spend as much time as us on the road. But being a gentleman, Herbrand said he’d stay with us until the end of the tour.”

Once that was over, time was against Enslaved. “We had three months to find a keyboard player, rehearse with them and record the album because the studio time was booked. We could have postponed everything, but didn’t want to do that. We could also have started the search for a replacement earlier, but that would have been like moving your new girlfriend into your house before your divorce had come through. It would have been rude.

“Our last show on the tour was in Bergen, and we had a good young Norwegian prog band called Seven Impale supporting us. And their keyboard player was incredible. He went mental onstage, and even played the organ with his elbows. He seemed like exactly the right person for us. It was Håkon. After the gig, we asked him if he’d prepared to help us out in the studio on the new album. Then we found out that he could also sing, so we became even more interested.

“As luck would have it, Håkon was looking for a new band because Seven Impale’s singer was planning to take time off to go to an opera school. So we grabbed him. You know what sums him up? When he was eight years old, apparently he said he wanted to be like Jon Lord – that clinched it for us!”

The arrival of Vinje has had a major effect on the band’s approach. “In the past, we worked everything out on guitar. But Håkon has now expanded it. For me, he’s like a Rick Wakeman or Klaus Schulze, in that he’s given our keyboards a voice of their own. He came up with some great musical suggestions during the recording sessions.”

All of which makes E an album that almost satisfies Bjørnson. “I always feel we can do better when I hear the final results. But there has to be a point when the album is ready, otherwise we’d still be working on Monumension. I can’t say that E has turned out exactly as envisioned, but it’s as close as we could hope to get right now. Maybe in 26 years, when we reach the point where we call an end to Enslaved, we’ll be even closer to realising our dream sound.”

E is out on October 13 via Nuclear Blast. See www.enslaved.no for more information.

Enslaved on their reinvention with new album E

How Enslaved have stood the test of time