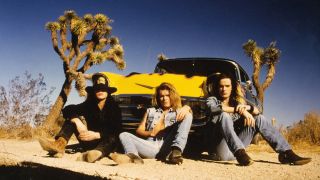 The Cult’s Sonic Temple album is 30 years old. The Cult, who are a bit older than 30 – but not that much, really – are touring to celebrate the fact, playing most of the album in its entirety (Soldier Blue die-hards, stay home). They also released a deluxe reissue that will cost you half your rent this month.

It’s the same kinda shit lots of bands do these days. But The Cult is not just some group of once-weres, and Sonic Temple is no mere album.

It is a futile gesture to even question the veracity, fortitude, or continued relevance of Sonic Temple. It's far from the greatest rock'n'roll record ever made, but it is most certainly one of the greatest rock records ever made. It may, in fact, be the perfect rock record. It is so rock that it will crack your fucking skull open, much in the way an Iron Cross-shaped belt buckle on a studded leather belt, swung wildly by a drug-soaked outlaw biker would, which is essentially what it is. It comes from a different time; a time when we had long hair, smoked cigarettes, got tattoos of screaming eagles with bloody claws on our backs, and threw bottles at bands if they didn’t rock hard enough.

And hardly any of them did. But The Cult sure did. After stripping their flowing dark-psych sound into an anvil-smacking, AC/DC-inspired ripped n'raw thunderboogie for 1987’s Electric album, the band spent the next year upping the ante, crafting an album that would define its time better, perhaps, than any other.

Sonic Temple hit the airwaves and exploded. In a time when Guns N’ Roses were the biggest band on Earth, Sonic Temple sounded even bigger. The band toured the world. It almost killed them. They lost their bass player along the way. They were never as big afterwards. None of it matters. All that matters is that Sonic Temple, as befitting its audacious title, still sounds like a holy document: the New Testament of rock'n'roll.

At that point in their career – and from there on in – The Cult essentially became a two-man gang. Ian Astbury was the shamanistic frontman, Billy Duffy was the icy-cool guitar hero. There had always been a push and pull between them, and there had been many radical stylistic shifts in sound since the band formed as weirdo goth-punks in 1983. But Sonic Temple was not about experimentation, or even art. It was about conquest.

LP3 contains Live At Wembley recorded by the BBC, while the cassette contains limited-release demos.

Also available as a 5CD set and a double album.

“I was very focused, personally, bound and determined, that The Cult should have a platinum album in America,” Billy Duffy tells Louder, whilst zooming around the British countryside in what we can only assume is some zippy, high-end sportscar.

“From the get-go, that was my goal. So it was a little careerist, for sure. I don’t think Ian resisted that, but I don’t think he viewed it from the same perspective, either. I think he saw it as being more psychedelic. I think he saw it as having more of Cream, Disraeli Gears sorta vibe, more than my sort of ultimate school-boy rock album idea. You know, no-holds-barred, punk is finally over, I just want to have a full-fledged rock album while I’m at the prime of my powers kinda thing. So maybe I took the lead on this one. I also found Bob Rock.”

Bob Rock. It’s all in the name, really. The famed and fabled sonic architect of Dr Feelgood and The 'Black' Album was still an up n’coming producer when Duffy crossed paths with him – but he believed in The Cult, and he had a vision. And that vision was good, noble and true.

“Being Canadian, Bob was quite an Anglophile, and I think that’s why he really ‘got’ The Cult. You know, there’s rock'n'roll elements to the band, but he also got the ‘Britishness’ of it. He’d cut his teeth playing guitar in a new wave band, but he grew up listening to the same sort of rock as we all did – AC/DC, Aerosmith, Led Zeppelin. So he got it. In essence, he thought we left something behind when we did Electric. He thought we should bring back some of the uniqueness from the Love album. It was to be a blend of both, he said that from the beginning.”

And so it was, but it was so much more. Tracks like Sun King, Fire Woman and Wake Up Time For Freedom are not mere songs, they are towering, epic, life-altering anthems, as big as the sky, louder than a bomb; all-engulfing monsters of pure leather-bound rock'n'roll excess. On Sonic Temple, The Cult – who you would swear were frilly, jangly goth-hippies five minutes ago – now sounded like red-eyed, fang-toothed, bicep-flexing werewolves on wheels. Whatever the hell Bob Rock did in there, he turned men into gods.

“You gotta remember the context in which that album was recorded in, in 1988,” says Duffy. "The hair metal thing was raging in Los Angeles, Guns N’ Roses was finally blowing up with Appetite For Destruction, ‘big’ rock was happening, and Bob Rock was at the centre of that. So it was an album of its time, for sure. I mean it was 1988, everybody was wearing a headband. But listen, a good song is a good song, no matter what decade it is. And that’s why it holds up.”

Of course, no band becomes legend without bringing the rock to the people, no matter how good their album is. And so it went with The Cult. “We were a bit leery about hitting the road again to be honest,” says Duffy. “I mean things got pretty wild on the Electric tour. We were pretty much living like pirates. We spent most of 1988 writing and recording Sonic Temple, so we were somewhat refreshed. Still, that was a long tour.”

The formula back then was a simple one. Release a single, release an album, open for a bigger band, release some more singles, tour again as the headliner. The 70s/80s road to greatness or oblivion, whatever came first.

“That’s exactly what we did,” states Duffy. “The problem was at the time we only got offered two big tours. One was Ozzy Osbourne, one was Metallica. We thought Ozzy was a little too old school heavy metal for us, and we knew Metallica. So we went with them. But this was not the modern, post-Black Album Metallica. In 1989, their fans were still pretty hardcore. I mean it was great, we went everywhere, but it was a very male-dominated audience. We used to joke that if there were any girls at the show, they must be there for us. But compared to a lot of bands that opened for them, we did alright. I mean, nobody bottled us.”

The band followed up with a headlining tour while the album climbed the charts. It hit top ten in the UK and the US. The album’s power ballad, Edie (Ciao Baby) began scraping the underside of the Billboard top 100 in the US, but never quite reached the heights Duffy hoped for. They got gold, but they did not get their platinum.

“I dunno what happened with that song,” says Duffy. “I really thought it would do more. A lot of bands like Whitesnake and Def Leppard were turning down their guitars and turning up their keyboards and getting poppier around then though, and that’s just not what that was.”

Still, under any measure, the album was a hit. And 1989 was a very good year for The Cult. And for all of us, really.

“That album was about one thing, being loud and proud. We were unapologetic about it. We still are.”

The Cult – Sonic Temple 30 will be released on September 13 via Beggars Arkive and is available for pre-order now. Catch the band on tour at one of the dates below: