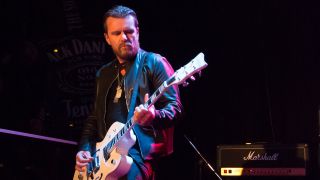 The Cult’s Billy Duffy readily admits that compiling his list of five essential guitar albums was something of a head-scratcher. “You can really go off on a tangent with this sort of thing,” he says. “Of course, I’ve left off a lot of favourites – guitarists and albums I really love. But what I did with this was to concentrate on the records that were important to me as a kid growing up in Manchester.”

The five records that Duffy selected are, in his words, “the 14-year-old me talking. These aren’t what I think are the most important or groundbreaking guitar albums of all time or anything like that; rather, here’s what did it for me as a young teenager in England.”

In assessing his picks, Duffy notes that all of the records feature guitarists who play from the heart, not the head. “It doesn’t have to be incompetent or thrashy,” he explains. “I like competence – but I want to hear some real emotion. If it’s too wrapped up in technique, I tend to tune out. And I love good songs, too, so that’s the Part B of what I want to hear. Your solo has to mean something, and if you have a good song, chances are your playing has a real purpose. It isn’t about you getting all wrapped up in your brilliance.”

On February 5, The Cult will release their 10th studio album, Hidden City, which is described as the final part of recordings that includes 2007’s Born Into This and 2012’s Choice of Weapon. The record sees the band in fiery form and once again working with their favoured producer Bob Rock.

“Having Bob as a producer is extremely helpful and inspiring to me as a guitarist,” Duffy stresses. “He’s a guitar player, too, so he kind of knows the way I think. It’s in his DNA. He’s got all the gear and the knowledge that you need to get great sounds, but he’s also got the passion and the understanding. He knows what the guitar is there for – to create excitement and to serve the song. People will understand that once they hear the record.”

The Cult’s Hidden City is available for pre-order via Amazon, iTunes and The Cult Store.

Below, Billy Duffy runs down his selections for five essential guitar albums.

“It was accessible and kind of easy for me to grasp as a guitar player. There was a real excitement coming from this album. It was the sound of New York, full of pretty punk people. I completely fell in love with the New York Dolls, and it was my love for them that led me to meet Morrissey – he was Steven Morrissey at the time – who was the self-proclaimed secretary of the UK New York Dolls Fan Club.

“This record has everything. It’s rock‘n’roll of its moment, but it also harkens back to the ‘50s. Johnny Thunders was a real roots guy – he did Chuck Berry solos. He delivered the sound and spirit of early rock‘n’roll to me in a glam-rock context.

“I played along to this record like mad. I could copy the big, powerful riffs, and it all felt dangerous and glamorous, and a bit irreverent, too. It was fabulous thinking that I was a New York guitar player like these guys.”

“It was given to me by an older guy at school. He said, ‘You’ve got to listen to this.’ How amazing is that? It was a bit bizarre, because the vinyl record just said, ‘Raw Power’; it didn’t say Iggy or the Stooges.

“The sleeve drew me in right away. The visuals had Iggy and his cool pants, and the guitar player with the stack of Marshalls. I was totally ready for all of that. The music hit me next. It was powerful and energetic, but it was slightly sophisticated because of James Williamson’s guitar playing. He seemed to be more evolved – or maybe involved – in his picking technique than some other guys. It excited me.”

“Mid-‘70s rock at its best. They had the twin-guitar thing down, that brilliant combination of Brian Robertson and Scott Gorham. Brian was a little more aggressive on a Les Paul Custom, and Brian was smoother on a Les Paul Deluxe or Standard – he did more minor-based solos. They worked so well together.

“I spent hours trying to work our their stuff, those dueling solos. I saw Thin Lizzy play with this lineup, and they were incredible. I liked the early Lizzy, too, the power trio thing they were doing. But this album summed it all up for me. From a guitar playing point of view, there was so much to dig into here.”

“I was there when the punk thing happened. I saw the Pistols in ’76 – I have the tickets and the posters – and they really did change my life. The Buzzcocks were happening, too, and they were unbelievable. But Never Mind the Bollocks brought it all together like nothing else.

“The Pistols were dangerous. Lots of bands think they’re being dangerous, but the Sex Pistols were the real deal. They were anti-establishment, and they created an excitement that you could just feel.

“The guitar sounds on this record, to this day, are unbelievably good. It was scary Combine Steve Jones’ guitar with John Lydon’s vocals and you’ve got the best kind of rock‘n’roll record ever. This was the soundtrack of my summer.”

“I’m a well-known Mick Ronson fan. I do love Brian May – I listened to early Queen quite a lot – and I’m a huge Free fan, as well. But if I had to pick an album to put on right now, and one I always come back to, it’s Bowie and The Man Who Sold the World. I still get turned on by this record.

“It’s a great guitar album. Mick Ronson’s licks were utterly fantastic. All I wanted to do was cop his stuff. Everybody wanted to be him. He was so cool, and he really understood the importance of the song and what a guitar needed to do within the context of the material. He had a sound and a vibe that was vital.”