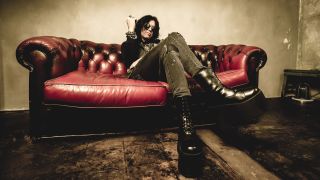 It’s probable that many hair metallists of the ‘80s delved no further into the blues than their well-worn Aerosmith records. Cinderella, however - and their singer/guitarist/songwriter, Tom Keifer, in particular - were one of the few artists of the genre to actually embrace some honest-to-goodness blues sounds.

So when it comes to selecting 10 albums that changed his life, it’s no surprise that Keifer (who’ll soon issuing a deluxe edition of his solo debut, The Way Life Goes) has a soft spot for blues artists… as well as albums issued in 1977!

This was special to me, because it was when I realised the rock musicians who inspired me had inspirations of their own. I was initially exposed to blues by Jimmy Page and Keith Richards. And a friend of mine turned me on to Live At The Regal, and I remember hearing BB King play, and saying to my friend, “He sounds like Jimmy Page!” And he said, “No! It’s the other way around.”

This record is what caused me to dig back into countless blues albums and American roots, in general. It started a domino effect of everything from James Brown to Jerry Lee Lewis to Little Richard.

I loved the album Hard Again. It’s that classic delta blues sound - from Mannish Boy to Deep Down in Florida, which I remember was one of my favourite backbeat songs of all-time. This was a major blues record for me.

I would say this record and the song TV Mama — which uses a National Steel open tuning slide acoustic — is as badass an example of that style as you can get. It’s everything from his voice to the song to his playing, it’s just really great. This really got me into the National Steel and that style, like I did on Bad Seamstress Blues and Dead Man’s Road. So, Johnny Winter was a big inspiration to me.

For me it could be every Rolling Stones album, but I have to include The Stones here, so I just picked one. They all kind of changed my life, but I love the title track. And Ain’t Too Proud to Beg is so cool. It’s just a classic record.

I remember getting Physical Graffiti for Christmas, putting it on, and hearing The Rover, In My Time of Dying, Kashmir… that record was just mind-blowing. I don’t think there’s a rock musician from my generation that wouldn’t say that Physical Graffiti wasn’t a major record for them. Very inventive record.

Another one from around that time - this is middle school/high school years, cutting my teeth, learning how to play. From a songwriting and vocal standpoint, I loved Rod Stewart. Foot Loose & Fancy Free was a huge record when I was in school, when it came out - Hot Legs and You’re Insane, that really funky track that he did. Definitely a soundtrack to my youth. And his lyrics… just incredible. He was a huge inspiration on both my vocals and songwriting.

I loved The Eagles growing up. I remember the first time hearing Life in the Fast Lane, I was just like, “That guitar playing is just too cool!” The solo on the end of Hotel California is just ridiculously musical, and it’s the kind of solos that I really like, where it’s just not jamming - it’s a song within the song. So that was a big record for me. Victim Of Love was also a great track off of this.

Rumours was another one from that era growing up. I loved The Chain - the dark vocals and dark vibe of that tune. That was a major record for me. And Gold Dust Woman - a vibe-y kind of track. The ‘70s were a great time, because every band had a different style, and you listened to all of them growing up.

Now getting back to the harder stuff, and again, this is a band where all their records were really major for me, but I would have to say Rocks by Aerosmith is one of my favourites. The first time I heard Back in the Saddle was just mind-blowing. Such a cool track, with innovative parts and sounds. Just a great song. That record, top-to-bottom, is just a major record for me. Nobody’s Fault was badass.

Michael Schenker was a really big inspiration to me on guitar. There was so many blues inflections in his playing, but he was also very technical… and was very melodic at the same time. An amazing player. And I love all the UFO stuff that he played on, but this record, I love the songs, but in particular, I love his guitar playing.

The solo on Only You Can Rock Me is one of those ones where it’s like a song within a song. It’s so melodic, but at the same time, it’s nasty - it’s not too pretty. He’s got that nasty blues thing in there, too. He really walked the line between melodic and nasty - always. So, he was a big, big influence on me. This record was one that I wore out.