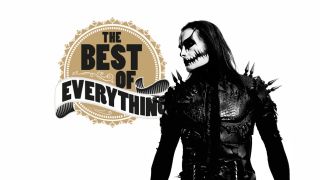 Since forming in Suffolk in 1991, the UK’s most malevolent metal band Cradle Of Filth have released 11 studio albums, four EPs, 14 singles, one live album and two collections.

Following the release of their most recent full-length effort Hammer Of The Witches, we challenged frontman, lyricist and founding member Dani Filth to trawl the back catalogue and pick their 12 most suitably evil tracks. Here’s what he selected…

OF MIST AND MIDNIGHT SKIES (The Principle of Evil Made Flesh, 1994) “I particularly like this song because I had to choose one from this album, and this is it! No, I like it because it’s very dramatic and it’s a bridge between what we were doing with our demo material and the first album – this was one of the first songs we wrote for that album. It has a really atmospheric build, and then it goes totally bleak and black. There’s some great storytelling in there too.”

QUEEN OF WINTER, THRONED (V Empire of Dark Faerytales in Phallustein EP, 1996) “Dusk…and Her Embrace was originally recorded in 1995 for Cacophonous Records with a different line-up, and then the band fractured in two. The three that remained – myself, Nicholas Barker and Robin Graves – persevered for about a year in court with our record company because we thought they were doing a shit job – which they were hence why we were taking them to court – and in the end we won the rights to the music. God knows how, but we did, and we were allowed to take the music and re-record it under Music for Nations. We gave Cacophonous Records the V_ Empire of Dark Faerytales in Phallustein_ EP as a sort of parting exchange, if that makes sense. The exciting thing is the original recordings of Dusk – which were literally just sat gathering dust on someone’s shelf – are actually going to see the light of day next year to mark the 20th anniversary of the album. It’s going to be a really cool part of Cradle history, and obviously they’ve never been heard before by anyone. Queen of Winter, Throned was a stepping-stone between the first and second albums anyway, but we put it on the V Empire EP in the end. We’re bringing it back for the forthcoming British and European tours.”

FUNERAL IN CARPATHIA (Dusk…and Her Embrace, 1996) “This is just an epic song, and it was literally written around one big hook. There’s a massive middle section, which is very Dracula-esque, and it’s a live favourite too – especially of mine. It really sums up Dusk…and Her Embrace and the funereal atmosphere of that record as well.”

BATHORY ARIA (PARTS 1,2 &3) (Cruelty and the Beast, 1998) “This one’s tres epic! Ha ha ha. It’s actually in three parts, hence why it’s an aria, and it’s the culmination of the story. It winds quite deftly towards that big breakdown at the end of the album, and it sums up the entire story. You’ve got Ingrid Pitt on there too, voicing the character of Elizabeth Bathory in a sort of older incarnation. There has been talk of playing this one live on the upcoming tour. I think we might have played it once on the Cruelty and the Beast tour, but I’m not overly sure of that.”

OF DARK BLOOD AND FUCKING (From the Cradle to Enslave_ EP_, 1999) “Every time I say the title of this track, I smirk. I really like the vocal performance on this one – it’s a really agro song.”

TORTURED SOUL ASYLUM (Midian, 2000) “I have so many good memories from recording this album. It was like being at a very, very cool summer camp. My daughter had just been born and she came up to visit, and we all had our own apartments – it was like a summer of fun during which time we also did an album. Midian was conceptual, but it was more like satellites orbiting around a main theme as opposed to a chronological story. But Tortured Soul Asylum was about the mythological underground city populated by monsters, called Midian. And of course Doug Bradley was involved with that record. That was the first time we worked with him – ‘Pinhead’ from Hellraiser. He reprised his role on the Midian album because he’d actually been in the film about Midian, which was Nightbreed, and we’d obviously work with Doug on subsequent Cradle albums as well.”

BABALON A.D. (SO GLAD FOR THE MADNESS) (Damnation and a Day, 2003) “This has got my favourite set of lyrics on the whole Damnation album, and we kind of knew it was going to be a single from the off. It was a very long single – about seven minutes – and I think it’s still in the Guinness Book of World Records as the first ever DVD single release to hit the Top 30 of the Official Charts. I was actually in a Mini garage buying a Mini and the people in there said they’d heard us on Radio 1 the night before, and the kudos from that got us some extra bits in the Mini! I remember because all of the BMW customers were left to their coffees for a while whilst the sales team dealt with us, which was cool. And the video was done by this guy called Wiz – who did videos for Marilyn Manson and Dirty Harry and a lot of people like that – and based everything on Paolo Pasolini’s film Salo, which was an adaptation of the Marquis de Sade’s 120 Days of Sodom. He wanted us to do a sort of tame version of that, and it was all a bit dodgy. It was beautifully filmed, but if you know the premise behind it then it’s pretty fucked up.”

NEMESIS (Nymphetamine, 2004) “This was one of the first songs I wrote that was kind of based on the modern day. It was all about religion and extremism. It became a bit of a crowd favourite as well, because of the big ‘I am Nemesis’ at the end.”

UNDER HUNTRESS MOON (Thornography, 2006) “This isn’t everybody’s favourite album but people are coming round to it. Usually it’s in the ‘Avoid’ bin though, in the list of all our albums. I don’t know why because it sold really well, and it was massive in America. But some people think it’s a bit ‘stadium rock’ – that’s what I’ve read anyway. If an extreme metal band can indeed be stadium rock, I don’t know! Possibly because we did that cover of Temptation [originally by Heaven 17] it put people off. But I love the album and I think it’s got some really strong songs on it, one of which is Under Huntress Moon. That and Nemesis from the previous album Nymphetamine, I’ve chosen because they’re great songs that you can bang your head to. They’ve both got big beats to them. When we play Under Huntress Moon live, it works really well as an end-of-set track.”

MIDNIGHT SHADOWS CRAWL TO DARKEN COUNSEL WITH LIFE (Godspeed on the Devil’s Thunder, 2008) “I really like this record and I think we did a great job on the whole album. It was a really dark one after Thornography too, and it was our last one with Roadrunner Records. I think they were a bit miffed with how dark it was. I even got my daughter to be one of the victims of Gilles de Rais [a 15th century French aristocrat, leader in the French army, and convicted serial killer of children on whom the album Godspeed was based around] on the next song Darkness Incarnate. I like this one because I like the lengthy song title and it’s the point in the album where things really take a turn for the darker. There’s a real Imperial March feel to that riff as well.”

LILITH IMMACULATE (Darkly, Darkly, Venus Aversa, 2010) “This is another pinnacle song and a big crowd favourite. When we played the Philippines earlier this year the promoter got in touch to say that he had a load of fireworks for the show, but the catch was that we had to play this song, which we did even though half the band had never played it before. We didn’t have a rehearsal or anything, we just went out and played it in front of 35,000 people, and it was pretty good – people were happy and we got our fireworks. So this song warrants inclusion for that reason alone.”

**MANTICORE** (_The Manticore of Other Horrors_, 2012) “We’ve done a couple of songs like this throughout the years, which are kind of themed and stylised around biblical subject matter. It’s about a mythical beast with the body of a lion and a human head, but it works on several levels and also refers to the foreign occupation of India by Britain. It’s very heavy too.”

Pick up the new issue of Metal Hammer for The Gospel According To Dani Filth. Cradle Of Filth’s new album, Hammer Of The Witches is out now via Nuclear Blast.