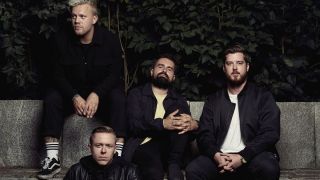 It's hard not to love a good nu-metal cover version – especially when that cover version slaps its own stamp on an otherwise distinctly non-metal tune. After all, what's better than a good song? A song that's had its edges roughed up and a load of shouty bits inserted, obviously.

One band who are no strangers to the infectious world of pop is Danish metallers Siamese, whose new album, Super Human, sees them tackle single B.A.N.A.N.A.S – an homage to Gwen Stefani and her own track Hollaback Girl.

To celebrate the album's release, Siamese vocalist Mirza Radonjica-Bang joins us to talk us through the world's best nu-metal cover versions. "These are my favourite nu-metal covers," he tells Hammer. "This list is truth, and you will find no effing Disturbed with that terrible Land Of Confusion cover on it."

Check out Siamese's single, B.A.N.A.N.A.S, plus tour dates at the bottom of the page.

"Incubus was my favourite band back in the days, and I really liked the original of this song. This cover is terribly bad – so bad in fact, that it becomes quite good. A lot of weird stuff happened in noughties, man."

"This one came long after nu-metal died in 2008. But it’s still got a vibe, and I remember when it went viral. That chorus really works as a massive nu-metal chorus. Sounds like P.O.D wrote it! Amazing."

"I remember hearing this song on Lovehatetragedy and thinking it was a very weird song in context. It wasn't until until years later I figured out it was a cover of the original track by Pixies. That was life before social media, my friends."

"A Perfect Circle did some kind of magic by making this song so dark. For me, that's art, man. Also I was huge on political stuff in my early 20s, and this speaks to the socialist buried deep in me."

"This was again one of those moments where the song is so bad, it became good. Coal Chamber was for me pretty much everything what was going sour with nu-metal, but they squeezed this one out and deserve credit for getting Ozzy on a really shitty track."

5. Rage Against The Machine - Renegades Of Funk (originally recorded by Afrika Bambaataa, 1983)

"'Dance sucka, dance sucka!' It sure does feel good to fuck shit up to this song. Again, I had no clue this was a cover until years and years later. But we learn all the time, kids."

"This wouldn’t be a list without Korn, my dudes and dudettes. This was a pretty quirky song for Korn to do. Was someone trying to copy the Faith trick by Limp Bizkit? (Answer: Yes.) There was an A&R somewhere who thought this up, for sure. This song did nowhere near as good, but it was still a pretty cool listen."

"No-one else can do a cover so well, it just sounds like another great System Of A Down song. Man, how I love this band."

"There’s no real way around it, is there? Faith kickstarted the careers of Limp Bizkit in my mind. And I see why. Choosing to go bananas in that chorus was a touch of genius."

"There can be no argument. It made the band's career, and it still sounds fucking good. Saw the band three months ago and people went nuts. You do too. Don’t lie. This works so well every time, every year, and for years to come. A true classic."

Siamese's new album, Super Human, is out now. Check out single B.A.N.A.N.A.S, or catch them on tour at the dates below.