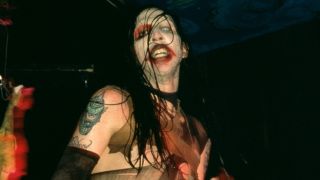 To celebrate the release of Marilyn Manson’s new album The Pale Emperor, we take a look at why The God Of Fuck is one of the most iconic and controversial men in metal in this in-depth A-Z.

Listen to The Pale Emperor here.

A is for Avril Lavigne

There’s been a fair few surprising Marilyn Manson collaborations over the years. Artists he has worked with include DMX, Lady Gaga and Eminem, however the surprises keep coming when in 2013 Mazza popped up on Avril Lavigne’s self-titled fifth album on the song Bad Girl.

So it’s no secret that the MM is one of the most iconic and recognisable figures in world of metal, and although the aesthetic may have changed several times it’s always been memorable. Perhaps his most shocking look though was when he appeared in the video for The Dope Show and on the cover of third album Mechanical Animals having acquired a pair of breasts.

C is for Columbine

It’s unsurprising that in the midst of Manson being the American media’s most hated figure he found himself as the scapegoat for the tragic Columbine massacre. Although it did lead to his Rock Is Dead tour getting cancelled, it was the sort of damning media assault that would spell the end of lesser men’s careers. Not in the UK though. Not only did Manson burst back onto the scene with Disposable Teens, he also appeared in Michael Moore’s Bowling For Columbine documentary talking nothing but sense that made all those news readers condemning him look as idiotic as they actually were.

D is for Dita Von Teese

Ever the #lad, ol’ Brian has had his fair share of love interests over the years. Following a high profile relationship with actress Rose McGowan, he married Dita Von Teese in 2005, who also appeared in his video for mOBSCENE. Far from marital bliss, the relationship was short-lived as Von Teese filed for divorce just one year later, due to his affair with Evan Rachel Wood.

E is for Eighties

It’s a safe bet to say that Manson is a fan of this decade given the fact that three of his biggest hits have come in the form of eighties covers. He first caught many people’s attention in 1999 with his cover of Eurythmics’ Sweet Dreams, before gate-crashing the charts in 2002 with his cover of Soft Cell’s Tainted Love. He also went onto cover Depeche Mode’s Personal Jesus for his 2004 best of compilation Lest We Forget.

F is for Fuck, God Of

In the song Cake And Sodomy from Portrait Of An American Family, he proclaimed himself as the God Of Fuck, a nickname that has stuck around to this day, and to his credit it’s a much cooler nickname than any of the names we tried to get to stick for us at school.

G is for Genealogy Of Pain

As well as turning out plenty of bangers in his time, Mr Warner is also pretty nifty with a paint brush and water colours. Genealogy Of Pain was a collaborative exhibition with film director David Lynch. The gallery displayed six of Lynch’s short films alongside 20 of Manson’s instantly recognisable and very creepy paintings.

H is for Holy Wood

Arguably the man’s finest hour, Holy Wood completed a trilogy of concept albums, that all also happen to be fucking brilliant. Following Antichrist Superstar and Mechanical Animals, he proved he wasn’t quite done with rubbing people up the wrong way just yet with an album cover that depicted himself crucified. Described as a declaration of war and centred around a fictional theme park where the main attractions are sex and violence, the album produced the likes of Disposable Teens, The Fight Song and The Nobodies to name but a few. Essential listening for any metal fan.

The man’s influence on the world of metal is indisputable. Not only is he a staple in many of our current crop of metal bands’ record collections, one of the biggest acts he made an impression on is goth rock princes and US chart botherers Motionless In White. Frontman Chris Motionless is openly a huge fan, and Manson’s influence is ever present from their aesthetic to their music.

Following his big break playing guitar for David Lee Roth, John 5 joined Marilyn Manson on guitar in 1998. He played with the band for a few years until tensions were high in the band and following Manson booting him in the chest at the 2003 Rock Am Ring festival, John 5 threw his guitar on the floor while yelling at Manson. John 5 left the band a year later, while some reports state it was amicable, others suggest he was dumped from the band.

K is for Kenny Powers

For all the scary business he gets up to, Manson also likes a good giggle. He is a big fan of Danny McBride’s Eastbound And Down, and series director David Gordon Green once stated in an interview, that Mazza was obsessed with the show, even going as far as dressing up as Danny’s character Kenny Powers and reciting huge chunks of dialogue. This obsession led to Manson making a cameo in the show in 2013.

L is for Lana Del Ray

Just when you think he might be calming down a bit these days, he once again caused an uproar in the press late last year, when a clip surfaced online that was allegedly a staged video of Marilyn Manson sexually assaulting Lana Del Ray. Manson was quick to set the record straight. Although he and his friend director Eli Roth hoped to film a video with Del Ray, it did not work out and the controversial clip was not for a Marilyn Manson video.

M is for Mansinthe (eat me drink me)

As if he hadn’t turned his hand to enough trades, in 2007 Manson also though he’d like to give getting people wasted a go and set about releasing his own brand of absinthe. Being green, containing wormwood and weighing in at 66.6% Mansinthe was a hit with people who like their shots a bit stronger than apple Sourz.

N is for Nine Inch Nails

Manson and NIN mainman Trent Reznor have had a rocky on again/off again friendship. Although best buds back in the day, with Reznor himself producing Antichrist Superstar, things went sour between the two which led to bickering. Although NIN’s Starfuckers Inc is allegedly about Manson, he made a cameo in the video suggesting everything was all peachy between the pair. But on the other hand Reznor can also be seen throwing a Mechanical Animals CD into the toilet in the same video, and in a 2009 interview Reznor referred to Manson as a “dopey clown” suggesting they’re not liking each other’s Facebook statuses any more.

O is for Omega

On Mechanical Animals the concept revolved around Manson playing two characters – Alpha based on himself, and Omega, an alien who has been captured and forced to play with a rock band, the titular Mechanical Animals. Half of the songs are by the fictional Alpha, while the other half, and more nihilistic and superficial songs such as The Dope Show are those of Omega.

Q is for Queen Of The Damned

The soundtrack for the 2002 vampire flick was put together by Korn frontman Jonathan Davis who wrote and produced a number of brand new songs performed by an array of his rockstar buddies. Alongside contributions from Linkin Park’s Chester Bennington and Disturbed’s David Draiman, Manson also gets involved on the song Redeemer.

R is for Ron Tulley

Another time Manson has popped up on our screens is during the final series of Sons Of Anarchy where he appeared as recurring character, the white supremacist Ron Tully. Manson has stated that he wanted to get involved with the show to make his father happy, while he was just expecting to feature a song but ended up bagging his own role.

S is for Stage Show

Marilyn Manson has been responsible for some of the greatest rock shows the world has ever seen. Be it standing atop of a podium dictator-style, or scrambling about on stilts there has always been a sense of the grandiose. He’s also dealt in some shock tactics that would make Alice Cooper wince including simulating sex, tearing up bibles and cutting himself with broken bottles.

T is for Twiggy Ramirez

The long time guitarist for Marilyn Manson joined the band in 1993 and contributed writing to Antichrist Superstar, Mechanical Animals and Holy Wood. Ramirez left the band in 2002, stating he wanted to preserve his friendship with Manson rather than argue over creative direction. Over the years that followed Ramirez auditioned for Queens Of The Stone Age and Metallica before joining A Perfect Circle, touring with Nine Inch Nails and rejoining Manson in 2008.

U is for Unusual Collections

The perks about being a controversial rock superstar who has sold loads of records means you have a bit of cash knocking about to splash out on a big telly. We’re sure he has got a big telly, but there’s some far more bizarre things Manson has purchased over the years. Papers were filled during one of his many lawsuits allegedly stating that Manson has purchased a child’s skeleton, masks made out of human skin, stuffed baboons and Nazi memorabilia.

V is for Violations

It’s no surprise that he’s found himself in hot water on more than one occasion, and as such a whole host of lawsuits have come his way. One of the most high-profile lawsuits he has been involved with was when playing the Detroit date of Ozzfest 2001 Manson thought his scrotum would make a nice hat for one of the security men. Manson ended up paying a $4000 fine and settled the lawsuit under undisclosed terms.

W is for Willy Wonka

For Tim Burton’s 2005 remake of Charlie And The Chocolate Factory, Johnny Depp allegedly based his performance as Willy Wonka on Manson. While filming there were reports that Depp was listening to Manson and had pictures of him in his trailer to help him get in character and add a sinister side to Wonka. There are also rumours that Manson himself was considered and badly wanted to play the part.

X is for X-Rated Videos

While he may have been having a laugh with all those lingerie models wearing bunny heads in the Tainted Love video, much of his videography features violence, nudity and all manner of creepiness that would have children cowering behind cushions and postpone videos until after 10 o’clock in the pre-YouTube years.

**Y is for Your Mother Fucks A Sausage **

While not one of his most recognisable numbers, this was a song recorded in 1993 by side project Mrs Scabtree. Although somewhat juvenile, it’s also an indicator for just how much offence he’d cause in later life. We doubt your mum would be very happy if she caught you listening to a song with a title like that!

Z is for Zim Zum

Zim Zum, also known as Timothy Michael Linton played guitar for Manson between 1996 and 1998 before being replaced by John 5. In a familiar story the split was said to be amicable and Linton left to pursue a solo career, but there are also reports of animosity between the two. Something that is only fuelled by the fact that a quick search on YouTube will bring up videos of Manson throwing a microphone at Linton.

Listen to Marilyn Manson’s new album The Pale Emperor in its entirety.