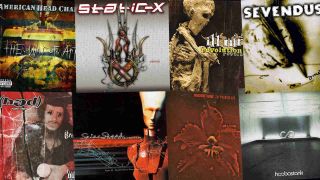 Too many great albums have gone unrecognised from the nu metal era. Here we worship and pay tribute to the best of the genre’s underrated heroes.

Coming directly in the aftermath of Linkin Park’s Hybrid Theory, Ill Niño took their penchant for colossal, poppy choruses, beefed up the guitars and added a little Latino flair to the proceedings. For a genre that has occasionally dated terribly, the likes of the pulsating God Save Us and crunching flamenco flair on Nothing’s Clear still sound remarkably fresh and have lost none of their bite. If you’ve got a taste for a chorus, Revolution/Revolución is essential.

Channelling the futuristic heaviness of Fear Factory into the brave nu world, Machine is a solid slab of industrial molten metal. As a genre, nu metal isn’t famed for its ferocity but Static-X combined danceable grooves with white-hot metal fury and a guitar tone to die for. It’s a tough call as both this and 1999’s Wisconsin Death Trip are excellent, but the overall savagery and technologically anarchic feel of this album just give it the edge.

Naysayers may scoff at Machine Head for The Burning Red but if you take your attention away from the garish tracksuits and fucking mental haircuts, this album rips like a motherfucker. Robb Flynn’s rapid-fire delivery on Desire To Fire and From This Day are undiluted adrenaline rushes, while Silver and Five are among the most sinister material the metal legends have ever recorded. Quite frankly, if it wasn’t for the Message In A Bottle cover, we’d say there isn’t a duff moment on it.

One of the very best albums to ever come out of nu metal and still to this day one of the finest albums of the 21st century. Unapologetically nasty, rhythmically ferocious and genuinely groundbreaking, The War Of Art is a bona fide masterpiece. Heavy, arty, catchy and filthy, there’s not a single itch that this album doesn’t scratch. Sure, there’s a lot of Mike Patton’s influence on here, but The War Of Art ranks among the best albums produced by Rick Rubin. Don’t doubt it. Just blast it out loud.

Spineshank – The Height Of Callousness (2000)

Fuelled by a whirlwind of energy, a masterful production job from Garth Richardson, and Jonny Santos’s incredible vocals, Spineshank remain one of the greatest bands you can ever hear in a club. Electronic soundscapes, the classic nu metal stomp-and-groove combination and choruses that last for days (even if you think you don’t know Synthetic, you do), The Height Of Callousness is a tour de force from front to back. If you like to go running, listening to this bad boy will shave minutes off your time.

Taking as much from hip-hop as they did from metal, Hed PE’s greatest record is an essential nu metal beast. Frontman Jahred was, quite simply, one of the best rappers to ever grace nu metal. His dexterity, ability to spit pure fire and uncompromising pugnacious lyrical attack gave Hed PE a ruthless aggressive streak way beyond so many of their peers, and their grinding riffs were just straight-up fierce. The band’s ability to carve a hook out stopped them from being just another thugged-up rap-metal parody. Bartender and Killing Time are basically as good as nu metal ever got.

Blessed with one of the most soulful and heartfelt deliveries in nu metal, Lajon Witherspoon has a serious claim to have the best vocal performance in the history of the genre on this overlooked classic album. Ably backed up by the grinding, powerful band behind him, his vocal trade-offs with both Chino Moreno (Bender) and Skunk Anansie frontwoman Skin (Licking Cream) are on the next level. It never quite happened for Sevendust on this side of the Atlantic but they remain massive in the States to this day. One listen to Home and you’ll understand why.

Coming very much from the commercial end of nu metal, Hoobastank may have had all of the danger of a toothless Chihuahua but my god, did they have tunes. Make no mistake about it, this was as radio friendly as nu metal got, but the quality of the songwriting was superb. Running Away was one of the best ballads to ever hit the genre and in the likes of Remember Me and the smash hit Crawling In The Dark, the Californians showed that they had the ability to write high-energy, catchy-as-the-plague bangers.