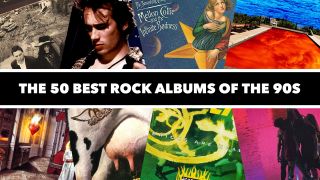 The 90s began as it would go on: with trailblazing, if sonically disparate, albums co-existing peacefully together underneath rock's great umbrella.

As the decade progressed, the sounds creeping from rock's shadows grew more potent. Before we knew it, they'd taken over the mainstream and turned music as we knew it squarely on its head.

As grunge continued its ascendancy, Metallica crossed over into the mainstream and the Prince Of Darkness continued to go it alone. We soon hit the year that (American) punk broke as retro-style Britpop took off in the UK. Elsewhere, as the mid-90s approached, an exciting new cutting-edge genre known as nu metal surfaced for the first time.

By the time the end of the century rolled around, millennia paranoia was rife and alternative music had been through the ringer. There were probably no bands better suited to soundtrack the uncertainty than rock's surviving band of misfits.

The 90s was a time when rock opened its mind to new sounds, new visions, new methods altogether. Music hasn't been the same since.

Here, your definitive guide to one of the most controversial decades in rock history, via the 50 albums that mattered the most.

The first album from the band who were to re-shape the sound of classic American hard rock.

This was more down-to-earth, and plugged into the blues tradition than the stuff that was saturating the airwaves. It’s the Allman Brothers meets Canned Heat, but with a quirkiness that was to be developed later.

Songs like Twice As Hard, Jealous Again and the Otis Redding cover, Hard To Handle, still sound as vibrant and gritty as they did all those years ago.

The art rock of their debut album, Nothing’s Shocking, in 1988 had been an exercise in musical graffiti.

This time, Perry Farrell and co painted on a wider canvas. It’s a masterpiece, designed to appeal to a more mainstream audience. With scant regard for LA's spandex-clad genre conventions, they turned rock'n'roll on its head by throwing elements of funk, goth and punk into the mix with complex and catchy as hell songwriting.

The subversive perversity that drove the band’s psyche was always bubbling beneath the surface of songs like Been Caught Stealing.

Somewhere between Pablo Honey and The Bends, Radiohead must have entered into some infernal pact with the forces of darkness, so profound is the quantum leap in quality between those two albums.

It may have been critically overshadowed by its successor, but The Bends is nothing short of a masterpiece: beautifully written, played and recorded, startling in its ambition and depth.

“The Bends is the best Radiohead album," says producer and 90s connoisseur Butch Vig. "This is right when they started distilling their songwriting, right before they started experimenting with OK Computer, which is a brilliant record too. But to me, The Bends is as good as it gets because the songwriting is impeccable."

The ultimate DIY band, these Washington DC punks took inspiration as much from Bob Dylan as the underground.

Repeater, their debut album, stunned with its articulate anger at the capitalism that so enveloped society. Yet, you could also hum the tunes in the shower.

Steadfastly refusing to compromise by chucking in their lot with a major label, Fugazi lead by example. Ever wonder why? This albums explains it all.

If Adrenaline, their 1995 debut, suggested Sacramento’s Deftones were riding along in Korn’s slipstream, then this follow-up proved they were nobody’s shadow.

This is a dense record, where de-tuned, nervy metal dallies with starkly bare tunes. It works brilliantly on My Own Summer (Shove It) and Be Quiet And Drive (Far Away).

Around The Fur remains arguably the definitive Deftones album.

An often underrated classic, King For A Day... is easily the most "challenging" album Faith No More ever produced. Musically it was cleaved right down the middle, alternating between ice cold cooler-than-cool lounge funk and frighteningly ugly jackhammer thrash-punk.

A vigorous star turn from vocalist Mike Patton ensured that the departure of guitarist and founder member Jim Martin was not as keenly felt as it might otherwise have been.

Patton sounds like 10 vocalists in one here, and his versatility is matched by that of the band, who tackle flipped-out funk (Star AD), Latino jazz (Caralho Voador) and insane punk (Cuckoo For Caca) with equal aplomb.

In the year when Nirvana’s Nevermind topped the US chart, Bon Jovi survived the great hair metal bloodbath by playing it very smart.

For Jovi fans, the title of their fifth album rang true. After the gruelling tours that nearly destroyed the group, the New Jersey boys returned triumphant with this set of top tunes.

From the infectious Sleep When I’m Dead to the irrepressibly upbeat Blame It On The Love Of Rock’N’Roll by way of the 10-minute epic Dry County, by Jovi, they were back.

If Slippery... made Bon Jovi’s career, Keep The Faith saved it.

This follow-up to their mega-selling Pump sees Aerosmith’s sights set firmly on the charts once more; you couldn’t call it experimental.

Riffs? Check. Hooks? Check. Tracks like Livin’ On The Edge strut and swagger as you’d expect. But there is a surprise later on (which we used to call Side 2): radio smash Crazy finds Steven Tyler reinvented as an unlikely torch song crooner.

But anyone who saw Aerosmith perform stand-out track Livin’ On The Edge at the ’94 Grammy Awards was left in no doubt about their ongoing potency.

During his time out from Black Sabbath the Prince Of Darkness had to keep himself busy somehow. And making solo records of the calibre of this one seemed to be just the ticket.

Pivotal to this album’s success was its monolithic title track, the best and most leftfield Ozzy song since Diary Of A Madman. Built around a throbbing bass riff written by ex-Alice In Chains man Mike Inez but rearranged and recorded by veteran Bob Daisley, it gave Ozzy relevance in the age of alternative rock

With Zakk Wylde on guitar and Lemmy on the songwriting team, Ozzy had seldom sounded better.

Featuring a title track that sums up California as perfectly as Beach Boy Brian Wilson himself could, Californication came along at a time when the Chili Peppers had their backs to the wall.

They didn’t so much ditch the funk rock of the past as hone it to something mature and intelligent. Around The World and Parallel Universe ramp up the energy, but it’s the slower songs – Scar Tissue, Otherside and the title track – that show a more thoughtful, measured side that would point the way to the Chili Peppers’ future.

Californication was huge, and deservedly so.