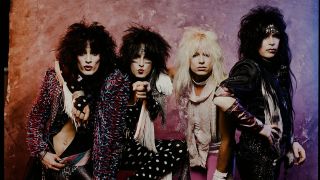 “We thought we were the baddest creatures on God’s great earth. Nobody could do it as hard as us and as much as us, and get away with it like us. There was no competition. The more fucked up we got, the greater people thought we were.”

That was how Nikki Sixx described the ascent of Mötley Crüe, the band who would cast the mould for so-called ‘hair metal’. That band’s wilful nihilism would soon distil into a more general, frothier hedonism, but the cheap thrills the Crüe created were enough to sustain the Sunset Strip scene for a decade.

While the Crüe had their roots in glammy ‘chicks with dicks’ like the New York Dolls and the influential Finns Hanoi Rocks (whose paths they would cross, with awful consequences), they were fond of saying their attitude was punk. If it was, it was the American definition of it; the Crüe were certainly more interested in success, drugs and women than in making social comment.

Their trash aesthetic was quickly and universally adopted, although only Guns N’ Roses really pushed the boundaries of it. The overwhelming explosive impact of GN’R’s debut Appetite For Destruction shoved even Mötley Crüe to the sidelines.

While the Crüe and Guns were each arch manipulators of their image, and neither sported for very long the truly towering hairdo that christened the scene, there were hundreds picking up crumbs from their table, from the harmless bubblegum popsters Poison to the more graphic LA underbelly inhabited by L.A. Guns.

Like most overwhelming musical trends, hair metal was closely associated with one location, in this case the few miles of Sunset Boulevard that ran through West Hollywood up to the edge of Beverly Hills. The iconic clubs there – the Rainbow, the Cathouse, the Whisky A-Go Go – became nirvana for kids from Moscow to Milton Keynes. And attempts to recreate them elsewhere were rarely convincing; what sounded great on Sunset Strip came across as forced and ersatz in the mouths of Doncaster brickies.

Ultimately, the scene was about lifestyle as much as music. It was about embodying a rock-star idyll. And all of the nerdy kids who were excluded would eventually rise up and kill it. Kurt Cobain wore make-up too, but not in the way that Nikki Sixx did.

While Mötley Crüe and Guns N’ Roses have been sturdy enough to survive and prosper in their variant forms, hundreds of other hair-metallers disappeared. However, the merest whiff of hairspray and power chords is more than enough to bring them flooding back to the forefront of our minds.

The Crüe reached a formidable peak of excess off the back of Girls Girls Girls. But as they hit a commercial high, they also ran out of control. That spirit is best captured here. The album has all of the vivid hormonal thrust of their first, Too Fast For Love, but the band – or at least principal songwriter Nikki Sixx – had added a little artfulness, too. Girls Girls Girls was loud, fast and dumb: the perfect representation of Mötley Crüe.

The band never made it to the UK to support it, famously blaming “too much snow on the roof” of Wembley. “Too much snow up my nose, more like,” Mick Mars remarked years later.

Released the same year as the Crüe’s Girls Girls Girls, Appetite For Destruction appeared to have come in from a parallel universe. GN’R might have looked like Mötley in their publicity shots, but the similarities ended there. It’s pointless to recap on the music because it quickly became ubiquitous. What’s interesting is the world view. Where Crüe and others were insiders on the LA scene, Axl was an outsider, and it showed. Welcome To The Jungle and It’s So Easy were about violence and fear, about yearning to fit in. Allied to such powerful tunes, Appetite… quickly became a code to live by.

The Albums That Defined The Genre

Recorded for just $23,000, Look What The Cat Dragged In is an instant, disposable trash metal classic. Intoxicating while it lasts, the record is too flimsy to withstand close examination, yet it perfectly captures its time.

Poison were too pretty to pull off anything other than lightweight sentiments like Talk Dirty To Me and Cry Tough, but they didn’t need to do anything else. They were a cheap date, and by the end of the night you knew you’d had a lot of fun. The subsequent Open Up And Say… Ahh was bigger, but Look What The Cat Dragged In said the same things faster and just as well.

Warrant seemed to have been invented for people who found Poison too difficult to understand, and their album title pretty much said it all. They had hitched up to the wagon and were along for the ride.

Undisturbed by original thought, Warrant made a record so blatant and bare-faced it could hardly have failed, given the prevailing climate. Singer Jani Lane had an ear for a tune, as demonstrated on the album’s two big hits – Down Boys and Heaven – but something of a storm followed, with accusations that the band hadn’t actually played on the record.

Fronted by the impossibly pretty Michael Monroe, Hanoi Rocks created much of the trash aesthetic with this record. Yet the aura of premature doom that permeated it was to prove horribly prophetic, and the band disintegrated soon after drummer Razzle was killed in a drunken car crash.

The Finnish band had relocated to London when they cut Back To Mystery City, and what it lacked in substance it made up for in charm and naked ambition. The wonderfully titled Tooting Bec Wreck hinted at their humour, while Malibu Beach Nightmare showed they had a way with an edgy, dirty tune too.

With their debut album Night Songs, Cinderella seemed happy to offer up some unchallenging ear candy to go with their ultra- glam looks. But, perhaps sensing a change in the air, their singer Tom Keifer attempted to shift gears before both the band and the scene got left behind. Adding some blues rock to their more standard hair metal was only partially successful, yet this album has still stood up well to the passing years. Bad Seamstress Blues and Falling Apart At The Seams are only average bluesers, but Gypsy Road and Don’t Know What You Got (Till It’s Gone) are classics that have stood the test of time.

Contemporaries of L.A. Guns and Guns N’ Roses, Faster Pussycat were as brassy and sleazy as the Russ Meyer skinflick from which they took their name. Their singer Taime Downe was at the centre of the LA movement, thus both Taime and his band were scenesters, a fact reflected in their debut record. Don’t Change That Song was raucous and memorable, as was their other stand-out tune, Bathroom Wall, a touching paean to the kind of girl Taime picked up in the Cathouse. Faster Pussycat never quite broke out of LA, but this is a salacious documentation of their attempt.

Tracii Guns was the man who’d put the Guns in Guns N’ Roses, and in Phil Lewis, a pretty-boy ex- pat who’d been in the British glam band Girl, he thought he’d found a frontman for his new band to rival Axl Rose.

L.A. Guns were as tough as GN’R and pointedly more sleazy. They had all the looks, if not quite as many songs, and this self-titled debut generated plenty of heat. Raw, and reeking of cheap booze and late nights, Sex Action and Hollywood Tease were pretty typical of the Guns/Lewis combo. What the band lacked in flair, they made up for in attitude, and for many this record remains a classic of its kind.

Ratt revolved around big-mouth singer Stephen Pearcy, even bigger-mouthed drummer Bobby ‘The Blotz’ Blotzer and the sunny and dumb guitarist Robbin Crosby. They took their cue from Aerosmith and Cheap Trick rather than from contemporaries like Mötley Crüe, but Ratt were neither as smart nor cool. What they were tremendously good at was having a good time, and this record sums up their appeal: its best song, Round And Round, is ineffably stupid but impossible to forget.

Skid Row epitomised the latter stages of hair metal. With the blueprint established, their mentor Jon Bon Jovi and manager Doc McGhee simply applied a tried and trusted formula. With a pretty, OTT frontman in Sebastian Bach, they had a man willing to sell his mother for the slightest whiff of fame. And it duly came along with this record. The rest of the band were seasoned players, so songs like 18 And Life and Youth Gone Wild were immediate and anthemic. Given the material, they knew exactly how to treat it. Bach was living it large, and Skid Row quickly became the rock monster he craved.

Motley Crue: "We'd Play To 20 People In A Sandwich Shop And Set Nikki On Fire"