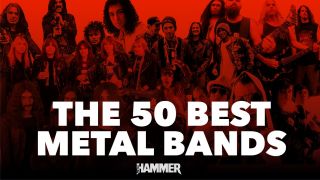 Over 110,000 of you voted in our biggest ever poll to officially crown the 50 greatest metal bands of all time. That's over 110,000 heartfelt, possibly controversial opinions.

The ethos behind the poll was pretty simple: no band was exempt. No rules except may the very best band win. When it was all done we took the data, wrangled it into an enormous spreadsheet, and performed some complicated calculations. Now, the results, as they say, are very much in.

Some of them will surprise you. Some may even shock you. Ultimately, though, the 50 bands in this list prove one thing above all else: that metal remains one of the broadest and most fascinating genres the world has ever seen.

Here's, officially, the 50 best metal bands in the world. As voted by you.

Not many bands have managed the feat of releasing a classic album, switching up singers and then going on to release even more classic albums. And then doing it all over again! But then, Killswitch Engage aren’t any other band.

Despite a million imitators forming in their wake, no one has produced melodic metalcore with the conviction or consistency of the Massachusetts heavyweights in the 20 years since they arrived. The departure of Howard Jones in 2011 left many assuming Killswitch were finally on the wane, but the reintroduction of OG singer Jesse Leach ushered them into a second golden age.

Hitting the ground running with a string of killer live shows, comeback album Disarm The Descent showed Jesse still had it, and they haven’t looked back since. Last year’s Atonement showed a band in searing, startling form, a cameo from Howard showing that Killswitch still embrace all their eras.

Quite possibly the most successful heavy metal band that Germany has ever produced (who aren’t called the Scorpions), when Helloween were at their peak – most notably, in that 15 month stretch between 1987-1988 when they produced Keeper Of The Seven Keys Part I and II – they were legitimately one of the most vital metal bands of the 80s. Those two records stand among the finest heavy metal albums from that glorious decade, and their influence can be heard in every band that followed who dared to dream big, from DragonForce through to Nightwish.

But the triumph of the Keeper Of The Seven Keys albums was short-lived. The line-up that recorded them splintered shortly after the release of Part II, sparking years of bitterness, public antagonism and even, indirectly, a tragic death. It was a long and most un-Germanic soap opera.

But as with so many soap operas, there was a twist. When the Keeper-era line-up put aside their many differences and merged with the band’s 2017 iteration, it proved one of the most unexpected reunions of that year. Still, clearly this time around something clicked, as the tour lasted an eye-watering 14 months and the band are still together today, with a new studio album due in 2020.

Watch: Helloween - I Want Out

No one in our world has realised such dark, singular visions. In the late 80s, Trent Reznor worked as a caretaker at a studio in Cleveland, Ohio. At night, he recorded his own unsettling industrial music. Raw emotion intersected with raging guitars and mechanised beats, coalescing into 1989’s Pretty Hate Machine and capturing the imagination of the disaffected.

In the mid-90s, fame threatened to swallow Trent whole, as he dabbled in hard drugs. He documented his experiences on harsh, 1994 classic The Downward Spiral, while 1999’s follow-up The Fragile refracted his troubles through a more experimental lens.

Following rehab, he evolved from tortured artist to an elder statesmen of heavy music, increasingly gaining a reputation for immersive shows with talented musicians and cutting-edge technology. Today, he has a collaborator in English musician Atticus Ross – the pair have also made a slew of acclaimed soundtracks – and continues to push and reshape the boundaries.

From the skinny, thrash-loving kids that gobbled up everyone’s attention in 2005, to the glorious return to form that was 2017’s The Sin And The Sentence, Trivium have long been one of modern metal’s most heartwarming success stories, having constantly occupied a special place for younger generations of metalheads.

They may never have hit the heights that those glorious Ascendancy-driven days promised, but this is mainly because Trivium are a band who have never been scared to step way away from their comfort zone, as the power metal-driven Silence In The Snow or the much maligned, but far better than you remember, The Crusade prove.

That ambition should be applauded, but it’s also worth remembering that albums like 2008’s Shogun and 2011’s In Waves are pretty much perfect modern metal records. The fact that, as they gear up to release their ninth album, they’ve long transcended those lazy “Kiddie Metallica” jibes shows they deserve their place here.

It took a little while for bassist Billy Gould, rhythm guitarist/keyboard player Roddy Bottum and drummer Mike Bordin to find the right vocalist – and name – for their alternative funk-metal project. After finally settling on the moniker Faith No More, the trio weathered a string of early lineup changes – one that included a brief stint with Courtney Love – before initially settling on the late Chuck Mosley as their frontman, and some success soon followed in the wake of infectious single We Care A Lot.

But after musical differences, Mosley was replaced by a young, enthusiastic singer going by the name of Mike Patton, who had been singing in his high school band Mr Bungle. Patton wrote the lyrics for the songs that would make up the Grammy award-nominated 1989 album The Real Thing within two weeks after joining the band, and the rest, as they say, is history.

The new line-up’s debut single, Epic, was a top 10 hit and its surreal music video got some serious MTV airplay. The catchy funk-metal tune Falling To Pieces followed. Then, in 1992, the complex, highly accomplished and critically acclaimed Angel Dust, complete with its formidable cover of Lionel Richie’s Easy, made it was clear the band were here to stay.

Faith No More remain as unique today as they ever were: imitated, but absolutely never bettered.

In a world dominated by the ‘next big thing’, holding steadfast to your creative vision through temporal, ever-changing trends is a difficult feat. In Flames are one such band.

Formed in 1990 in Gothenburg, these Swedish metallers set out to create a sound that had never before been heard. Blending the sky-high melodic guitar lines of heavy metal giants such as Iron Maiden and Judas Priest with the brutality of death metal, In Flames – along with Swedish scene-mates Dark Tranquility, At The Gates and Soilwork – developed the ever influential subgenre of melodic death metal.

The early days of In Flames saw a shaky, revolving door membership while the creative vision took shape. It wasn’t until 1995’s sophomore The Jester Race that the band really came into their own. Continuing to refine what became known as the melodic Swedeath (or Swedish sound) approach to songwriting, all songs were eventually written with the intention of playing them live – a decision they've not looked back on.

After revelling in increased successes during the noughties, things unfortunately took a sour turn in early 2010, when it was announced that founding member and guitarist, Jesper Stromblad was to part ways with the group following a lengthy battle with alcohol addiction.

Still, this wouldn't hold the band back. Pushing the micro envelope of melodic death metal to almost impossible reaches, and seemingly polarising fans in the process, In Flames remain undeterred by any distraction and continue to be an outstandingly relevant and forward thinking player in modern metal’s big leagues.

Watch: In Flames - I Am Above

The prolific Las Vegas band have released eight albums since their inception in 2005, a heroic pace by today’s standards. Their work ethic has paid off, propelling them from undercard hopefuls to arena-filling headliners.

It's not all been easy, of course: vocalist Ivan Moody's struggles with addiction have threatened to derail the band completely, and it's looked like a full band implosion was inevitable more than once. Elsewhere, their low-slung bludgeon and air of machismo has drawn some fire.

But the figures speak for themselves: with Ivan now 19 months sober, their most recent album, F8, hit the top 10 in over a dozen countries, something that makes them the envy of many of their contemporaries.

Sepultura have been a band for 36 years, but their inclusion here is mostly due to one of the most creative and fertile periods of any metal band ever from 1989 to 1996.

The thrash-driven Beneath The Remains, death metal of Arise, groove metal of Chaos AD and the proto-nu-metal of Roots is as daring and eclectic a run of albums as any you could mention in history. To do that whilst also managing to drag yourself up from the slums of Brazil, to become a major international force, was utterly unheard of and practically impossible back then. Sepultura did it.

And, although the brothers Cavalera are still intrinsically linked to the band – and almost certainly always will be – the current iteration led by guitarist Andreas Kisser and fronted by Derek Green has been managing their legacy for nearly a quarter of a century and have produced some killer albums and fantastic live shows. Forget the politics, just enjoy the music.

Joining long time stalwarts Metallica, Megadeth and Slayer in the highly esteemed ‘Big Four’ of metal, Anthrax were perhaps the band most responsible for the emergence of the hardcore thrash and speed metal movement of the 80s. Combining the guitar sound and vocal characteristics of heavy metal with the furious pace of hardcore and punk, Anthrax’s twisted history of genre-destroying exploration and against-all-odds lineup changes have stood the test of time.

Named after the ‘sufficiently evil’ sounding disease the band's guitarist Scott Ian happened across in a biology textbook, their signature thunderous stomp and poser-crushing riffs fly at you like a colossal, jaw-busting fist to the face. Wash it all down with ear-busting shredding and elegantly-crafted solos you've got a pretty good summation of what Anthrax are all about.

Not ones to shy away from musical boundary-pushing, they levelled the playing field in 1991 with their crossover hit, Bring The Noise, in collaboration with Public Enemy. A feat that proved successful in uniting two different musical cultures with one common, anti-authoritarian ground, it's an ethos that still resonates between metal and hip-hop to this day.

Over the years, Dutch titans Within Temptation have undergone quite the transformation. They started out in 1996, part of a crop of symphonic metal bands, including Nightwish and After Forever, that had started making waves in Europe. Their early records aimed for ethereal and bombastic, but the band had their breakthrough with 2004’s The Silent Force, which showcased a leaner, meatier strain of songwriting.

Since then, led by a metal power couple in the shape of husband and wife vocalist Sharon Den Adel and Robert Westerholt, the band have steadily drifted away from their symphonic roots. They dabbled in 80s rock and pop anthemia on The Unforgiving (banger Faster sounds spookily like HIM’s version of Wicked Game) eventually perfecting a much heavier, full-bodied sound on last year’s Resist, that prioritised emphatic atmosphere and dark immediacy over orchestral histrionics and booted the band firmly into metal’s upper echelons.

Watch: Within Temptation - Paradise (What About Us?)