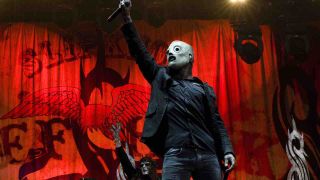 Since it was launched in 2003, the Download Festival has been the first event marked in every metal fan’s diary. Sadly, this is the first year the annual pilgrimage to Donington Park won’t be happening. But rather than mope about it , we asked you to cast your minds back and vote for your favourite ever performances from the festival’s illustrious history. The fact that we could have doubled the number of legendary moments says it all. But here are 20 greatest ever Download sets as voted for by you.

At the start of the 00s, the metal world wondered who was going to step up and become the next generation of Download headliners. Bullet For My Valentine? Trivium? Bring Me The Horizon? But it was a deal pretty much sealed on Download 2011’s Saturday as a second-on-the-bill Avenged Sevenfold, still hurting from the tragedy of losing drummer The Rev only a year before, stole the show from a reformed System Of A Down. The next time they were in town, they were topping the bill.

The last hurrah for the inventors of metal, at least at Download. It seems apt that, on a weekend best remembered for the appalling weather conditions, Black Sabbath took their final bow in a field sodden by relentless rain and a sheet of grey sky. Although the surrounding were grim, it perfectly suited Sabbath’s bleak,  doomy classics and there was no way a little drizzle was going to stop 80,000 metal fans paying their respects for the final time to one of the world’s most iconic band.

The image of a procession of nervous drummers waiting patiently, sticks in hand, to have their shot at sitting in the most prestigious drum stool in metal will never be forgotten by those who saw it. Metallica without Lars Ulrich seems absurd an idea, but in 2004 – with Lars a no-show due to anxiety – the band roped in Slipknot’s Joey Jordison, Slayer’s Dave Lombardo and Lars’ drum tech Flemming Larsen to play a set that was even faster and more frantic than they had sounded in years. For drama alone it was a landmark Metallica show, and certainly like no other show they’d ever played.

Considering that year’s other Main Stage headliners were Metallica playing The Black Album in full and the return of Black Sabbath, you could be forgiven for thinking that The Prodigy’s Friday night bill topping slot might have been forgotten. That would be to underestimate their live prowess as a live band, as the first clear non-rock headliners, the Essex crossover crew, winding down the touring cycle for career best album Invaders Must Die, treated Download like they treat any other festival: by tearing it to the ground.

It had been 12 long years since Faith No More disbanded, although the legend and influence of their brand of idiosyncratic funk rock had only grown during that time. No one expected a reunion, so when they announced they would be returning to headline Download it blindsided everyone. Their performance saw frontman Mike Patton hobbling out on a cane, doing pushups onstage and slipping bits of Lady Gaga’s Poker Face into the set, delighting longtime fans by being as unique and bizarre as they ever were.

At the end of 2009 a campaign from UK rock fans, sick of Simon Cowell’s X-factor guff monopolising the Christmas No.1 for so long, took Rage Against The Machine’s Killing In The Name to the top of the British charts. The band agreed to thank Britain with a free show at Finsbury Park, but their greatest moment in this period was a week later when they headlined Download’s Main Stage. With no pyro or light show and a crowd twice the size of Finsbury Park RATM put on an ferociously intense and electrifying spectacle.

At the first ever Download, rumours started to circulate that the unoccupied slot in the middle of the day on the second stage was going to be filled by metal’s biggest band. For once the rumour proved to be true. Metallica stepped out and decimated a packed tent, before heading off into the distance. It was too much to believe for some. A shell-shocked Nathan Gray of Boysetsfire, the band directly on afterwards, asked: “Did Metallica just support us?” Yeah mate, they actually did.

Download 2016 felt like the end of days – almost certainly the worst weather that the festival has ever had to endure. By the end of the Sunday the site was a quagmire, all rivers of thick mud and endless damp patches as far as the eye could see. For the hardy souls that stuck it out though, the payoff was a set from Iron Maiden, promoting their latest album The Book Of Souls, that stuck two fingers up to the conditions and rewarded those committed enough with a set of uncompromising heavy metal brilliance.

The final UK show from one of the greatest metal bands the world has ever seen. After over 35 years of destroying metal fans’ vertebrae, we finally said goodbye to Slayer with their headlining slot on the second stage in 2019. Far from getting sentimental, Kerry King and co did what they had spent their career doing, namely powering through a set of warped speed thrash with not a pause for breath. We’ll never see the like again.

Trivium were basically kids when they were added as the opening act of Download 2005’s Main Stage. When they looked out at the empty field at 10.58, two minutes before their set was due to start, they must have felt a felt tinge of disappointment. It was a different story as they stepped out to start playing and were greeted by the sight of thousands of metal fans careering down the hill toward them. Matt Heafy and co then played the set of their career, instantly establishing themselves as metal’s most exciting new band.