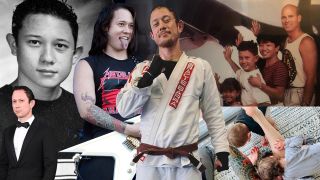 Matt Heafy is the ultimate metal-fan-made-good. As the singer and guitarist with Trivium, he’s spent the last decade-and-a-half on the frontlines, producing some classic albums along the way (Trivium’s latest, What The Dead Men Say, is right up there with their very best).

During that time he’s got to do the kind of things that his 15-year-old self could only dream of, from playing Download to jamming with members of Metallica. We asked him to open up his personal scrapbook and look back at some of the key moments in his life from childhood to today.

“I was Sub-Zero from Mortal Kombat”

Matt: “That’s Halloween, when I was in elementary school. I was Sub-Zero from Mortal Kombat. I was a huge Mortal Kombat fan. I was in second or third grade when Mortal Kombat I came out, and I made a Mortal Kombat club. It was me and a bunch of other kids, and we’d draw our favourite fatalities – us ripping people’s heads off or pulling their hearts out.

“A teacher found it and had my parents come in, cos the school was severely worried about me. My parents were, like, ‘Well, that’s the game he plays all the time, he’s happy.’”

“We’ve always been a super-happy family”

Matt: “That’s my sister Michelle, myself, my mom and my dad. My sister was really into marine life and whales. It’s weird that they had us standing in front of a photo of a whale – that makes no sense at all. I’m glad it wasn’t the whale itself, cos I would have felt bad. I’m not into that vibe.

“We’ve always been a super-happy family. My parents have always been supportive of what I do. They never had to set a curfew or a schedule for me, cos I’d just be in my room, playing guitar.

“My dad is a Marine, and I’m actually one of the only non-military or non-first responder males on his side of the family. No one ever pressured me into going into the military. My dad just waited to see what I wanted to do in life. And when I wanted to be a guitar player, he cultivated that and embraced it. I'm gonna do the same with my kids.”

“I had a Krisiun shirt in high school”

Matt: “I would have been 11 or 12 at that point. I was a lot like I am now – I got along with everyone, not excessively introverted or extroverted. I got along with the jocks as much as I did the gothy kids. I was into pop-punk at first, then I was into Metallica, then I started getting into bands like Korn and Slipknot. In high school I had cut-off camo shorts, boots, a Krisiun shirt, and super-long hair, but no one gave me a hard time. What would I tell the kid in the photo? I wouldn't give too much away, cos all the ups and downs is what leads you to the point where you are now.”

Matt: “What does this photo evoke? Really bad haircuts, for sure! But not I think not looking like the typical idea of a metal band is what got a lot of people who weren’t into heavy music to look at as and go, ‘I’m gonna check ’em out.’

“Those were the glory days in the UK for sure – we were on every magazine cover, every show was given the perfect score, we were going to be the next biggest band. But that whole period only lasted nine or ten months. The very next record [2006’s The Crusade], all the people who said that were suddenly saying we were the worst band in the world and we were over.

“I look at this photo and we weren’t ready, so I guess it needed to happen. But it did make things difficult. We were adopted by the UK, shunned and we came back. We’re like Jon Snow. Hopefully we’ll rewrite Season 8 an little bit.”

“I’m covered in piss in that photo”

Matt: “Download ’05 was the one that really broke us out, but 2006 was a weird one for us. We were trying to beat the previous year, which was always going to be difficult.

“I look happy there, but right before we went onstage, this bottle comes flying over the backdrops and I get hit and doused with this warm, smelly liquid. It was a full bottle of piss. It wasn’t someone aiming at me - they just said, ‘Well, I guess there's no toilet here, so I'm gonna throw this over the backdrop.’

“I look around, asking Korn and Metallica's crews: 'Does anybody have an extra towel.' Nobody has an extra towel, so we go out and play. I'm actually covered in piss at that photo.

“It was a good day despite the piss. I filled in for Jonathan Davis on Blind, which I was super-nervous about. But we never beat Download ’05 until 2019.”

“Kirk Hammett invited us out for sushi”

Matt: “Metallica are the band that got me into wanting to do this. The first time we met Lars and Kirk was at Rock Am Ring. We’re standing in our dressing room and a guy walks in, it’s Lars Ulrich, our childhood hero. He just starts talking to us, he’s the nicest guy.

“We were in Amsterdam once at the same time as Metallica, and Kirk invited the entire band out with him, Lars and a couple of their buddies for sushi. It was the fanciest, most incredible sushi bar I’ve ever been to in my life. When we finished the bill comes and Kirk slides it to me and goes, ‘This is on you, right?’ I look at it and it’s like, [gobsmacked] ‘Oh my god.’ He goes, ‘Nah, I’m just kidding.’

“The first time I met James Hetfield, I was, like, 'I have to introduce myself.' I went up to him and said, ‘You're my biggest fan!' I was stuttering and stammering. I had to walk away. Over the years when I've seen him, it's got a little better. But I'll still screw up when I see him.”

“Jiu Jitsu is the great equaliser”

“I’ve been doing Jiu Jitsu for a little over seven years. I got into it after our first tour of Brazil. I loved Brazil so much, I said, ‘I want to do what Brazilians do’, and that was basically soccer or Jiu Jitsu. And I like going for the most difficult option, and Jiu jitsu seemed more difficult.

“For the first three years, I was basically getting my ass kicked every day, but I’ve slowly gotten better.  I do three to five sessions a week, two hours a session. Our security guard is a retired MMA pro, so he’s my main partner.

“I feel like all musicians should have to do Brazilian Jiu Jitsu – it’s the great equaliser. It's a humbling martial art. It's not about strength. It’s about physics and leverage and understanding how human joints work and how blood flow to the brain works.

“There are quite a few metal and rock musicians who are into it. Zoltan from Five Finger Death Punch is a long-time Jiu Jitsu guy, so is Maynard James Keenan. I’ve been able to train with Herman from DragonForce, Billy Graziadei from Biohazard. Billy’s fundamental game is unbelievable. He’s taught from the old, old school. Who’s best out of everyone? Ha, I’m not gonna be drawn by that. Steel sharpens steel.”

Matt: “The first Download we played, in 2005, before walking onstage I was, like, ‘We sound terrible, our voices are bad, we’re going to play to an empty field.’ Then when 40,000 people ran up, I almost blacked out with adrenaline. I walked offstage and said, ‘What just happened?’ We were always trying to outdo that, but we never managed it until 2019.

“This one, we felt invigorated and aggressive in a great way. We just went out there and played for our lives and had a great time doing it. Those are big smiles in that picture. The UK was the place that was our adopted home, that took us in and gave us a career. It just felt like we were finally welcomed back home.”

“My kids know my screaming voice”

“They’re hilarious. My wife would always have the Twitch streams on, and when they hear Trivium they both yell, ‘Dad!’ They know my voice – even my screaming voice.”

“I like to think that I've changed at least 30 per cent of the diapers I've bought for them in their lives, and that’s only because of the times I've been on tour – it would have been more if I’d been at home. That's a pretty good average for dads. Am I hoping they go into the music industry? If they want to pay back some of their diaper bills, sure.”

“My Twitch room looks cluttered but it smells immaculate”

Matt: “It looks like an episode of Hoarders: Gear Edition. I started live-streaming music about two-and-half years ago, and we have streamed literally every single Trivium show from around the planet for free since then. Maybe 75-90 per cent of the time, it’s me playing Trivium songs by request. It's non-stop – it's athletic-style practice of Trivium material. That's why I'm in better shape vocally and guitar wise than I've ever been.

“How sweaty does it get in there? Honestly, I can not wear deodorant and I won’t smell, even on tour. You can ask my wife. Maybe it’s something about my Asian genes, but I never stink. So the room looks pretty cluttered but it smells immaculate.”