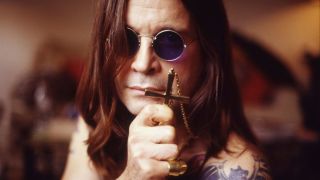 They didn’t just throw away the mould when they made Ozzy Osbourne, they smashed it into little pieces, encased the resultant debris in concrete and buried it deep in a secret landfill site well away from civilisation – so inimitable is the man who has spent close to 50 years as one of music’s most famous stars.

Draw up a checklist of proper rock’n’roll behaviour, and Ozzy will have ticked all the boxes: drugs, booze, shagging, arrests, near death experiences, his own reality TV show. But that doesn’t really do justice to the fact that he’s one of the greatest rock stars ever to walk the planet, whether that’s drawing up the blueprint for heavy metal with Black Sabbath or defying expectations to carve out a massively successful solo career.

His legend is assured. But where did that legend start? We hop in a time machine with the great man to go right back to the beginning and find out…

You were born John Michael Osbourne on December 3, 1948, in Birmingham. In your autobiography, I Am Ozzy, you say: “I was very nervous as a kid and always had a fear of impending doom.”

It’s still very much the case. I don’t know why. I’ve been to therapists and psychiatrists to try to get to the bottom of it. Fear was a big thing with me as a little boy. It still is, with my stage fright, thinking I’m going to fail and all the rest of it. You wake up and you feel afraid, but you don’t know what you’re afraid of. Someone once said to me, “If you build a wall on dodgy foundations, it’s not going to be very safe.” And that’s kind of what I am, you know. As a kid I used to run down the road and if I trod on a cracked paving stone I thought something bad was going to happen. I guess I was just born with it. I’ve always felt that way. But that’s where the alcohol and the drugs came in, because they nullified that feeling.

Were you bullied at school?

“Well, I did my share of bullying too. What saved my arse was my sense of humour. The zany fucking things I used to do. [My son] Jack said to me the other day, “Dad, do you think people are laughing at you, or with you?” I said, “Jack, as long as they’re laughing, I couldn’t give a fuck.”

You are dyslexic. If you had grown up today, at a time when they can spot things like dyslexia earlier, how do you think things would have turned out?

I don’t know, because all my kids are dyslexic and they all have attention deficit disorder. Jack was on TV last night jumping off mountains on a rope – what the fuck’s that about? So it hasn’t slowed them down. I can’t answer that question because it was the way it was.

People say he used to beat me up. He never did.

Did Tony have a moustache back then?

No, but his dog did.

Every now and then they’d let him bring his electric guitar into school. You’d hear him playing Shadows songs in the hall. Whatever people say about me and him, there ain’t nobody to touch his fucking guitar work. He came up some of the all-time heavy riffs.

Once you left school, you had a succession of dead-end jobs. You eventually found one you actually liked: working in a slaughterhouse…

It wasn’t because I was killing animals. It was because when you’d finished the kill you could go home. You’d get there at six in the morning and, depending on how many cattle you had to kill, sometimes you’d be back home three or four hours later. So you had the rest of the day off. That was better than working nine to five in an office. When you finished the kill you could go home and that’s what I liked about it. The money was good as well.

Did the slaughterhouse job influence your future relationships with animals and insects? Bats, doves, insects and the like…

No, but people who eat meat should always walk round a slaughterhouse one time to see what goes on there. To watch how an animal is shot, how its throat is cut, and how it’s skinned and gutted and prepared for market. I eat meat. I’m still prepared to kill an animal for food if I have to. But I don’t do that any more. I love animals. I’ve got 17 fucking dogs now.

You went to prison for burglary…

I only did that because I thought I’d be accepted into the local gang.

What are your memories of your time behind bars?

When you’re in prison it stays in your fucking memory. A fucking hour in one of them places is long enough. But I didn’t do that long in prison; just about a month.

While you were in your cell, did you really hate your dad for refusing to pay your fine?

No, but I suppose I was disappointed in him. Then again, he wasn’t the guy who broke the law, I was. When I came out he said to me, “I could’ve paid the fine but I wanted to teach you a lesson.” It fucking worked because I didn’t want to go back there again.

After you got out of prison, you decided you wanted to pursue a career in music. What led you to that decision?

When I heard The Beatles, they sucked me right in. I thought, “Fucking hell, I want to be a Beatle.” My father bought me a Vox PA system and a microphone, and that was it, really. I was supposed to pay him back but I never did. To be honest, I wish I’d done more for him. He died years ago, in January 1977. It was a very sad time for me. Everything went down for a while. My father died, I got fired from Black Sabbath, I started to see Sharon, I got divorced from my first wife, Thelma, I got Randy Rhoads in to play guitar and he got killed in an air crash… but I stuck it out. I remember when Randy got killed I thought, ‘This is fucking over.’ But Sharon said, “No it fucking ain’t, Randy wouldn’t have wanted you to give up.” So I carried on.

Do you still think about Randy Rhoads a lot?

He was a really wonderful person. I think about him all the time. Every year, on the anniversary of his death, I always send flowers to his family. Gardenias. Randy used to love the smell of gardenias. But they always remind me of fucking funerals when I smell them.

When you met Sharon, was it love at first sight?

She was one of those chicks that, when she laughed, she used to make me feel great. A big, hearty, crazy laugh. One thing led to another and I can’t imagine life without her now. I met Sharon for the first time in 1970, when she was a receptionist for her father, Don Arden. Tony was seeing Sharon for a while. I don’t know what the deal was with that. It’s none of my business.

When you toured with Mötley Crüe back in 1984, was it a suprise to discover a band who were crazier than you were?

I remember saying to Doc McGhee, who was their manager at the time, “Doc, somebody’s going to die on this tour.” Shortly after the tour finished Vince [Neil] had the car wreck and killed the guy [Razzle] from Hanoi Rocks. It was fucking unbelievably crazy. It was the most memorable tour of my entire career. Nuts. Every single day something major would happen. People say to me, “Did you really snort a line of ants?” It’s very possible but I can’t fucking remember, you know?

Presumably you don’t remember trying to strangle Sharon in 1989 either?

I can’t remember a lot of things to be honest. My biggest fear was to wake up and hear someone saying, “It was him.” But that’s what happened after I tried to strangle Sharon. That was one of the biggest regrets of my life. I love the woman, so why would I want to harm her? That’s how fucked up I was.”

Is it difficult to piece together your memories?

My long-term memory isn’t actually so bad, but since I had the quad bike accident [in 2003] my short-term memory is shot to pieces. I go upstairs to fetch something and by the time I get there I’ve forgotten why I did it. Now I understand why people live in bungalows.

You passed your driving test when you were 60. Did you take lessons with the British School Of Motoring?

No. Ha ha! I took the test in America, not here. I can drive an automatic, a stick shift, anything. I don’t want to drive around the fucking world, but when you live in the hidden hills I just want to be able to drive down to the shops.

What car did you learn to drive in?

I learned in a Rolls Royce and I passed my test in a Range Rover.”