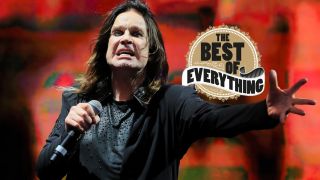 I got an email from Ozzy’s management about six years ago. I don’t know where the hell they got it from or how they found me, but I guess it was through YouTube or something as I was one of the up-and-coming guys on the scene. They asked me to audition and I actually got the gig the same day.

As for what it means to me, it’s the same as what it would mean to every guitar player in the world. It’s really the biggest honour and the biggest thing you can achieve as a heavy metal guitar player, period. It’s the most coveted guitar gig in rock ‘n’ roll. With every era, Ozzy’s always tapped into whatever style was around, but still he remains original and himself and has all these amazing songs. They all sound modern but they also sound like Ozzy, you know.

We’re going to do my favourites randomly, as it’s hard to put them in any order. But let’s start with the first song that I played with him…

BARK AT THE MOON (Bark at the Moon, 1983) This was the first song that I played with Ozzy at the audition, and I love it – the riff, the solo, and the vocal melodies. I love everything about it. It’s one of the best heavy metal songs ever written. And a lot of his stuff is just great pop music, but with a heavy sound. It’s rock ‘n’ roll obviously, but there’s a pop element in there. It translates from hard rock to the average Joe out there who can listen to it on the radio and it’s not going to bother them, but metal heads love it as well. There’s not many artists out there who can do that.

OVER THE MOUNTAIN (Diary of a Madman, 1981) The first record I picked up was Diary of a Madman and this was the opening track on there. It really grabbed me the first time I listened to it and it’s still one of my favourites. It’s such a heavy song, but again with this pop vibe to it because of how catchy it was. When the solo first came in it turned my head because it was mind blowing the stuff that Randy Rhoads was doing. It was so well thought out and articulated, and really groundbreaking for its time.

CRAZY TRAIN (Blizzard of Ozz, 1980) Probably Ozzy’s biggest hit as a solo artist, this is still being played on all radio stations across the world. It’s a timeless classic. The riff is so iconic as well. It’s like one of those first 10 riffs that you have to learn when you first start playing guitar. It’s up there with all the best, and I love playing this one live.

KILLER OF GIANTS (The Ultimate Sin, 1986) Jumping back to the Jake E. Lee era, one of my favourite tracks from then is Killer of Giants. When I was in the conservatory here in Greece I was learning a lot of chordal stuff and my teacher back then gave me the intro of this song to learn, and there’s some really interesting stuff going on throughout the whole track. It became one of my all-time favourite songs because it was one of those ones that I learnt all the chords to. I remember telling Ozzy before we went on the Scream tour, ‘Man we should add this to the set list’, because for some reason he doesn’t like The Ultimate Sin album. But he went back and listened to this one, and he was like, ‘Yeah cool, let’s try it.’ So we did it for the most part of the tour, and it was a song he hadn’t played since like 1986. I try to do that as much as I can. I always tell him songs like this are hidden diamonds. The Ultimate Sin album is full of those.

SHOT IN THE DARK (The Ultimate Sin, 1986) This is a brilliant song, and again it’s the perfect mix of pop and rock. And it’s another timeless track. Even though it might sound dated and very ‘80s for some people, it remains a fucking great song. And it always goes down great with the audience when we play it live. The guitar work is really cool as well, and alongside Bark at the Moon, it’s probably one of Jake E. Lee’s finest moments.

BLOODBATH IN PARADISE (No Rest for the Wicked, 1988) I just like the satanic vibe of this one. It’s very evil, and very rock ‘n’ roll at the same time. I love Zakk Wylde’s guitar playing too. The pitch harmonics obviously became his trademark, and his playing is like a guitar school of its own. He plays very mean guitar and I like that.

MIRACLE MAN (No Rest for the Wicked, 1988) I’m surprised we’re not playing this one live. The register is probably just that bit too high for Ozzy these days. But it remains one of his all-time classics, and I think it’s the first song Zakk wrote with him. The riff is just huge, and it’s such a catchy track again. For the video they put Ozzy in this stable with like a hundred pigs, and when the director said action and the music came through the speakers it was so loud the pigs got scared and they all shat at the same time, so there was about 100 pigs shitting everywhere. That’s such a typical Ozzy story.

GETS ME THROUGH (Down to Earth, 2001) For me, this is one of the standout tracks by Ozzy from the last 15 years. It’s a great song – great lyrics, great guitar work, great groove. What a line-up as well! Mike Bordin, Robert Trujillo and Zakk Wylde. That was the record when Zakk came back. It was that era when he was kind of in and out. There’s a great live DVD from this record, which I’ve watched over and over.

LET ME HEAR YOU SCREAM (Scream, 2010) This was the first single off the Scream record and it was a big moment for me. It was the first time that anybody heard me playing with Ozzy, and I remember they flew me back a couple of times to redo the solo to make sure it was the one. They wanted to come in with a bang with the new guitar player, and we worked really hard on this one. It’s a really cool song. It was also the second number one radio hit of Ozzy’s in America, ever. The first was I Don’t Wanna Stop and this one was the second.

TIME (Scream, 2010) This one has a real Beatles vibe to it, and it’s the older Ozzy talking about how time waits for no one and all that stuff, which is cool. I played some nice slide guitar over it, and it’s a really nice track. It’s probably one of the more overlooked tracks from the Scream record, but it’s one of my personal favourites.

MR CROWLEY (Blizzard of Ozz, 1980) This is one of my all-time favourite Ozzy tracks. There’s two epic solos – one in the middle and one at the end – and it has these very classically influenced chord progressions. Randy, for being an American, sounded very European. And me being European, I just like that sound. He had that style down. And this is such a great song. How fucking scary was it too, particularly for the time it came out, talking about Mr Satanist. Even to this day the track sounds epic. It’s a great arrangement and a fantastic song.

Gus G was talking to Matt Stocks. His album Brand New Revolution is out now via Century Media Records. For more information, visit his official site.