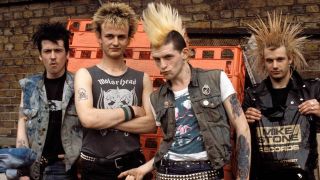 It has recently come to light that Joseph Corre, son of deceased former Sex Pistols manager Malcolm McLaren, intends to burn some £5,000,000 worth of punk memorabilia on November 26 of this year to coincide with the 40th anniversary of the Pistols’ debut single Anarchy In The UK. It is, he says, an act of protest against – among other things – the corporate sponsorship of Punk.London, a year long series of events, gigs, exhibits, and the like, ‘celebrating 40 years of punk heritage and influence in London’. Given that Punk.London is sponsored by The National Lottery and supported by the Mayor Of London, he may have a point.

Then again, given that Corre sold his lingerie company, Agent Provocateur, to 3i – a financial corporation formed by the Bank of England – for a cool £60,000,000 back in 2007, and that burning all this memorabilia appears to be his only contribution to punk rock, it could also be the act of a massively over-privileged, bellend who could just as easily have protested by giving it all to charity.

Like it or not, punk rock has often had corporate sponsors, most of the pioneers of the genre signed to major labels, who – guess what – are corporations! EMI, A&M, CBS, Sire, Polydor, all of them corporations from whom bands like The Clash, Sex Pistols, Siouxsie And The Banshees, Ramones, Sham 69 et al were more than happy to take large amounts of money. And don’t even get me started on punk bands doing adverts – Johnny Rotten putting the cunt in Country Life, The Clash advertising Choice Hotels, The Transplants advertising shampoo (when none of them have any hair!). So much for rebellion and sticking it to the man. Although, that Levi’s ad with the Cockney Rejects was pretty cool, and to be fair, perhaps it’s all about what you do with that corporate cash: Henry Rollins took an enormous amount of flak for doing Gap and Apple Mac commercials, but used the money to fund his independent publishing and record company 2.13.61 and to keep his band on the road.

Incidentally, if not for Converse, the 100 Club – where many of the aforementioned celebratory gigs are being held – would be closed by now, like pretty much every other iconic venue in the capital. The place was massively in debt before Converse stepped in, so to speak, and although the footwear giants have a long association with punk – being the shoe of choice for the Ramones and Sid Vicious – it was not for this reason that they bailed the club out. It was simply because Converse VP/GM Richard Copcutt spend his youth there and didn’t want to see it shut down. I happen to know this for a fact, because Rick was the drummer in my old punk band Soldiers Of Destruction, who played the 100 Club numerous times, and were, rather ironically, banned for life after a particularly obnoxious performance opening for the English Dogs. Safe to say, that ban is now lifted.

But I digress. If Corre wants to burn all his memorabilia as some sort of protest instead of doing something useful with it, then that is his prerogative. It’ll just make everyone else’s stuff more valuable. And perhaps burning it all is the right thing to do, the punk thing to do, get pissed, destroy. After all, if there’s one thing we can agree on, it’s that punk rock was never supposed to be about wallowing in nostalgia – which rather negates the whole point of having a 40th anniversary celebration in the first place.

Another of Corre’s gripes is apparently that punk has been co-opted by the mainstream, with Punk.London allegedly getting a nod of approval from none other than the Queen of England. Admittedly this does seem somewhat ridiculous, although it’s unlikely that Her Madge will be pogoing in the pit to the UK Subs any time soon. But while punk has undoubtedly infiltrated the mainstream, changing everything from fashion (which Corre should know all about) to politics, and, of course, just about every other genre of music, it remains, at it’s core, remarkably unscathed. For every Green Day there’s a Pussy Riot, or indeed, a real riot, with some spiky-haired oiks throwing bricks through the windows of McDonald’s. And since when the fuck was Discharge mainstream? Or GBH? Or the Exploited, Crass, Gallows, Sick On The Bus, or Conflict?

Besides, the mainstream is just that, a stream, and wasn’t the whole point to change the direction of it’s flow? While it’s admirable that the multi-millionaire lingerie-peddler turned down an MBE in 2007, in protest of Tony Blair’s involvement in the Iraq war, burning a bunch of memorabilia achieves nothing. Give it to the homeless, for fuck’s sake! That would be really punk rock! Especially since it’s probably all the Vivienne Westwood stuff that punks could never afford in the first place, and which Westwood dressed the Sex Pistols in, using them as glorified clothes horses in order to, ahem, get her fashion into the mainstream. Oh, and that’s Dame Vivienne Westwood, by the way, an award which she collected from the Queen at Buckingham Palace. She is also Corre’s mum, which may explain why Agent Provocateur thought it perfectly acceptable to charge over £200 for a very small pair of knickers.

Meanwhile, Punk.London plods on regardless. I don’t live in London anymore, but out of curiosity I went to the website; there’s some cool events, photo exhibitions, a couple of decent shows, but nothing to get overly excited about. Until, that is, you get to November 26, where – I shit you not – the listed event is ‘Joe Corre burns his punk stuff!’

Somewhat confused as to how it’s possible to protest something while being listed as one of the attractions, I clicked on the link to find an impassioned letter from Corre explaining his actions. Obviously, it’s best if you read it for yourself, but aside from a shared disgust that Boris Johnson has anything to do with Punk.London, the general gist of it is that people aren’t outraged by punk anymore – it’s not the bad old days when punks were attacked in the streets. At nine years old, he says, grown men would spit in his face for being a punk. People were stabbed, arrested and thrown in jail for being punks. Uh, yes, and why would you want that still to be the case? And maybe he’s forgetting Sophie Lancaster, who was murdered in 2007 because of the way she looked. Believe me, looking ‘alternative’ will still draw attention in some places, wanted or not, and curiosity is far preferable to violence. More likely it’s that Corre doesn’t cause any outrage because he doesn’t look outrageous.

Moreover, Corre complains that ‘the establishment’ who once hated punk so much are now celebrating it. Ignoring the fact that the multi-millionaire could, himself, be considered ‘the establishment’, isn’t it about fucking time? If we’re honest, punk rock never had them shaking in their boots, but it sure as hell rattled their cage, and continues to do so to this day. Forty years on, the spirit of punk rock is still not dead; it continues to evolve, to mutate, to grow and to provoke. And that is worth celebrating!