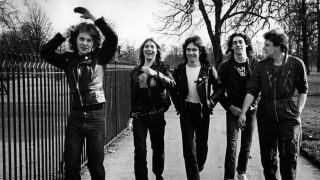 Looking back, the New Wave Of British Heavy Metal kinda snuck up on us. In 1979, when this amazing musical movement began, I – along with thousands of other music fans in the UK – was obsessed by the giants of American rock. Punk had driven the British metal scene so far underground that its battered, bullet-belted body had been discovered in Australia.

But in Britain suddenly it all changed. All-new heavy groups inspired by punk’s do-it-yourself ethic began to emerge out of the metalwork. Young long-hairs suddenly understood that they could record and press up their own singles, book their own gigs… and subvert people’s senses in a brand new way.

The NWOBHM was a remarkably fertile time in UK rock history – one that’s unlikely to ever be repeated. And even now, many years after its inception, there is endless interest in the NWOBHM. It’s still coming on strong…

Is Iron Maiden’s debut album also their best? You could make a strong case for it. Compared to the sleek prog-metal machine the band evolved into, Iron Maiden sees them as a bunch of scruffy East End herberts with a powerful point to prove. That signature Steve Harris bass sound is there, and singer Paul Di’Anno is on prime form. Bruce Dickinson tries his damnedest, but songs such as Prowler and Charlotte The Harlot just aren’t the same without Di’Anno’s growl. Much has been made of Maiden’s punk influences, but in truth Iron Maiden is just an aggressive metal album, and as raw as an open wound.

Original versions of this album are massively collectible: 12-inch vinyl records in white sleeves signed by band members. Some had all four signatures, others didn’t, so who knows how many variations there were. Lightning To The Nations is a real tour de force, and probably the most professional and well-rounded of the early NWOBHM releases. Guitarist Brian Tatler nonchalantly plucks classic riff after classic riff out of the air, and vocalist Sean Harris sounds like Robert Plant with a Gro-Bag attached to his bollocks. The refrain ‘Am I evil? Yes I am!’ still resonates. Just ask Lars Ulrich.

“Satanic metal, right?” you might say. Well, you’d be wrong. Despite all the Devil-horned imagery, Witchfynde’s debut album presents a mature and musicianly take on the NWOBHM genre.

I remember being disappointed with this record at first, when I described it as being as scary as Casper The Friendly Ghost. But Give ’Em Hell has improved over the years. The quality of the mysteriously named Montalo’s guitar playing and songwriting is first class, and the band are as at home on epics such as The Divine Victim (about Joan Of Arc) as they are on sleazier stuff such as Pay Now, Love Later.

In line with Saxon and [Samson’s debut album] Survivors, Wild Cat may not be the Tygers’ best album. But if you want to explore the roots of the NWOBHM it’s a super place to start (and let’s not forget that it reached the heady heights of No.18 in the UK chart.)

The Whitley Bay band released a series of fine singles on Neat Records before MCA snapped them up. Wild Cat was singer Jess Cox’s swansong before being replaced by ex-Persian Risk frontman Jon Deverill for ’81’s Spellbound. Unlike later releases, when MCA emaciated the Tygers’ sound, Wild Cat is raw, effective and still leaves scars.

Some people may baulk at the inclusion of Girl in this section, but what the hell. Girl bucked the trend by being preening poseurs from London instead of warty oafs from Wigan.

With not a hint of ‘dues-paying’ they came outta nowhere and got signed to Jet Records. Further disapproval followed when singer Phil Lewis (later of L.A. Guns) started shagging actress Britt Ekland when everyone else was shagging Motorcycle Irene. But Girl really upped the ante on Sheer Greed, and songs such as Hollywood Tease put them at the forefront of the NWOBHM (in this case meaning New Wave Of Big-Haired Metal).

Never was an album more aptly named. This Wakefield trio never let a good song get in the way of a rampant, high-speed guitar solo. Led by six-string maniac Steve Zodiac (a Johnny Winter lookalike who played barefoot), Vardis released a series of breathless singles – including If I Were King and Let’s Go – before this frankly bonkers album hit the streets. Vardis’s finest hour came when they played the Heavy Metal Holocaust Festival in 1981 alongside Ozzy Osbourne and Motörhead.

The first, and possibly only, truly ground-breaking album to come out of the NWOBHM, no one had heard anything like Welcome To Hell before. And after a single listen, most people never wanted to hear anything like it again.

Flanked by his depraved and despicable helpers Mantas (guitar) and Abaddon (drums), Venom bassist/vocalist Cronos recreated the sound, smell and insufferable heat of Hades itself, in a studio in North East England. “We’re possessed by all that is evil,” they gargled. And no one argued with them. Songs like In League With Satan and Witching Hour defined the genres we know today as thrash and black metal.

The Mantis were always at the more melodic and thoughtful end of the NWOBHM spectrum. Unfortunately their all-time classic song, Captured City, isn’t on here, but there’s still plenty of good stuff (Rich City Kids, for instance), all wrapped up in an excellent Rodney Matthews sleeve. The band briefly attracted the attention of manager Peter Mensch, but he opted for Def Leppard instead. There was supposed to be a version of Russ Ballard’s I Surrender on here, but Rainbow nicked it.

Here’s another acronym: Raven (along with Venom, The Tygers Of Pan Tang and no end of other bands from the Newcastle area) were more than NWOBHM, they were part of the NENWOBHM (North East New Wave Of British Heavy Metal).

A classic power trio of brothers Mark and John Gallagher (guitar and bass/vocals respectively) and Rob ‘Wacko’ Hunter on drums, Raven were so breathless and fast-paced they dubbed their music ‘athletic rock’. Rock Until You Drop races along with tracks like Hell Patrol and Don’t Need Your Money, and it paved the way for a big-time deal with Megaforce Records in the US.

Like The Tygers Of Pan Tang, Fist were another Neat Records band to get a contract with MCA. They released 1980’s Turn The Hell On, before returning to Neat for this. Despite the presence of drummer Harry ‘Hiroshima’ Hill and bizarrely named bassist Norman ‘Pop’ Appleby, Fist were an anonymous-looking bunch. But their songwriting was of the highest standard, as dole-ful epics such as SS Giro proved.

Fist are still active today, and in 2005 released an album, Storm, which featured excellent new versions of two of their classic tracks: You’ll Never Get Me Up In One Of Those and Name, Rank & Serial Number.