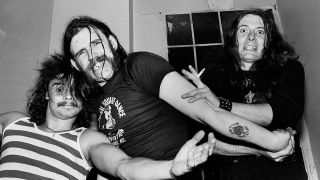 Take one decrepit football stadium. Equip it with (and we quote) ‘the biggest PA system ever used in Britain’. Invite Black Sabbath to headline. Apply for a licence to sell copious amounts of alcohol. Sit back and watch the punters roll in. That’s what should’ve happened in theory. In practice, however, there were a few hiccups along the way. Most of them caused by bottles of Panda Pop.

Allow us to explain. To confirm, the scene of the one-off Heavy Metal Holocaust – Port Vale FC on August 1, 1981 – was suitably tumbledown. And certainly the zillions of speaker cabs piled high at one end of the arena looked impressive. But Sabbath were absent because they were behind schedule with their Mob Rules album. And the alcohol licence? Some numbskull at the local council had misfiled it under ‘loft extensions, pending’.

Tragically, tonsil-parchingly, throat-gaspingly, the Holocaust was ‘dry’. The only beverage was the aforementioned Panda Pop – small plastic containers of bright fizzy liquid on sale at 30p a... er… pop. The sole option for the fans was to guzzle as much as they could and get high on the E-numbers. But against the odds the Holocaust was a success.

Ozzy Osbourne’s Blizzard Of Ozz were added to bolster the bill and, in the absence of the Sabs, Motörhead were elevated to headline status.

The day kicked off with Wakefield trio Vardis rollicking through New Wave Of British Heavy Metal classics such as If I Were King. As the scorching summer sun beat down, Noo Yawk’s Riot steamed through ferocious classics including Fire Down Under.

The smoke from Canadian band Triumph’s pyrotechnics repeatedly, and disappointingly, wafted away in the wind as they promoted their (then) new elpee Allied Forces. Not the effect they had envisaged. Ozzy and Randy Rhoads gave us songs off the first Blizzard album and tasters from Diary Of A Madman. And Motörhead – low-flying aircraft, parachutists and all – finished things off in fine festering fashion.

The unlikely star of the show was another member of the Canadian contingent: dippy guitarist Frank Marino, whose band Mahogany Rush appeared between Riot and Triumph.

As this writer lay spreadeagled on his back in the centre-circle of the Port Vale pitch, soaking up the rays, Frank noodled away to his heart’s content, his tripped-out playing echoing around the venerable old football club, his wah-wah-pedal-infested solos reverberating off the ancient corrugated-iron roofs above the spectator terraces.

“It was a terrific day,” Marino confirms. “I met some interesting people – some from parts of Britain that I never knew existed. They had different accents and I couldn’t understand them. Especially the ones from Wales.”

And the Panda Pop?

“I remember loads of people chucking bottles in the sky. They would all throw the bottles in the air at the same time – I guess they were plastic bottles, full of coloured liquid – and it looked like billions of fish jumping out of the ocean. It was really amazing.” Indeed. ‘Dry’ or not, The Holocaust remains the stuff of legend. It was far out, man!"