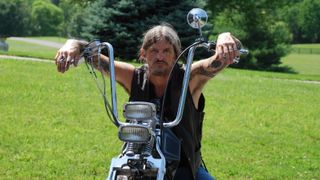 Robert Scott Weinrich, better known to the world as Wino, formed his first band in Maryland aged 16 in 1976.

Originally Warhorse, they became The Obsessed a few years later. After 40 years of prolific, passionate dedication to heavy music – and celebrated stints with underground metal legends like Saint Vitus, Spirit Caravan, The Hidden Hand and Shrinebuilder – Wino recently announced he’d reactivated The Obsessed, signed to Relapse and started work on a new album. In celebration of this news, we cast an eye over some varied gems from this iconic frontman’s beautiful bulging back catalogue.

Saint Vitus – Born Too Late (SST 1986)
Wino began his career in Saint Vitus with the totemic title track of the LA doom pioneers’ third album, and although only 26 years old, his soulful bellow already sounds tinged with arcane wisdom and bitter experience. An outsider lament of isolation and contempt, Born Too Late opened an album that sluggishly pushed the boundaries of slow-n’-low metal, a bleak, strung-out trawl through oppressive themes of madness, addiction and war.

The Obsessed – The Obsessed (Hellhound 1990)
Wino founded The Obsessed in the late 70s, but the heavy rock power trio initially remained prophets without honour on the early 80s DC hardcore scene. After a few demos and a seven inch the band recorded this full-length in 1985; it remained unreleased until 1990, but these sludgy grooves have a blue-collar basement-jam chemistry and a spiritual uplift that’s utterly timeless, Wino’s voice, guitar and ethos taking centre stage with resounding style.

The Obsessed – Lunar Womb (Hellhound 1991)
On Lunar Womb, The Obsessed sound ready for world domination. With a hot new rhythm section (Scott Reeder went on to Kyuss, Greg Rogers to Goatsnake) and a sharp clutch of tunes, Wino drew together hard rock threads across the decades, from Sabbath and Zeppelin to Metallica and Soundgarden. The band sounded inspired and hungry, accessible but wholly uncompromised, and ready for 90s rock stardom; it didn’t turn out that way alas, but Lunar Womb suggested it might.

Spirit Caravan – Jug Fulla Sun (Tolotta 1999)
Emerging from his mid-90s wilderness period of homelessness and addiciton, Jug Fulla Sun was the glorious sound of Wino getting back into the swing of jamming, pulling off some blissful leads and riffs alongside Maryland/DC scene stalwarts Dave Sherman and Gary Isom. There’s a loose, warm, homemade vibe to the recording, which only emphasised the poignancy of Wino’s return, as well as some career-best songs.

Shrinebuilder – Shrinebuilder (Neurot 2009)
How could it fail? Wino joined the world’s heaviest supergroup - alongside Neurosis singer/guitarist Scott Kelly, Sleep bassist Al Cisneros and Melvins drummer Dale Crover – and the world shat the bed. These highly distinctive musical personalities coalesced into one vast throbbing organic unit, channelling their energy into this righteous hypnotic earthshaker of an LP. Of course, these men are seasoned professionals, but there’s some higher magick at work here; unfortunately, it seems never to be repeated.

Place Of Skulls – With Vision (Southern Lord 2003)
Wino hooking up with Pentagram guitarist Victor Griffin was dream-come-true news for fans of old-school doom. Due to geographical constraints and religious differences their collaboration didn’t last long, but hearing these noble lifers trade licks and lyrics on class opener Last Hit is still a heady thrill, and Wino-penned war elegy Long Lost Grave is one of the man’s most emotive songs.

Premonition 13 – 13 (Volcom Entertainment 2011)
An artful project melding Wino’s eternal monster doom riffs to an expansive, melodic prog flair, 13 is the unique result of a brief, intense creative spurt. Wino teamed up with longtime jam buddy Jim Karow in 2010, the pair trading vocals, guitar harmonies, melodies and ethereal threads of feedback on this sole LP, but by 2012 the band were no more. Shame, as the interplay crackles in radiant flourishes, arrangements undulating with dramatic flair.

Wino – Adrift (Southern Lord 2010)
The weight of soul was always apparent in Wino’s performance, but with game-changing solo album Adrift, he stripped it right down to acoustic guitar and voice. Freed from overdriven distortion pedals and hammering rhythm sections, we got to hear a more vulnerable, sensitive side to Wino’s talents, and it made such obvious sense we all wondered why it had taken him so long. He’s regularly played and recorded acoustic sets since, often collaborating with German singer/songwriter Conny Ochs.

Lost Breed – Wino Daze (Helltown 2007)
Wino sang six demo tracks for LA biker-doom quartet Lost Breed in 1989, and they’re killer, catching the singer in the transitional phase between leaving Vitus and reforming The Obsessed. A definitive 12-inch vinyl version was released in 2013 on At War With False Noise Records, but beware of this release: a cheapo CD-R which omits the cover of Motörhead’s Iron Horse, and has a load of later, less inspiring non-Wino demos tacked on the end.

For more information on The Obsessed, visit their Facebook page.