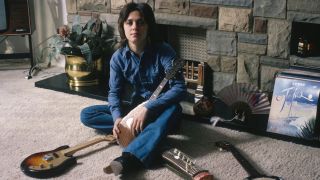 Suzi Quatro is best known for her golden hit-making years of the early and mid 70s when the singles chart reverberated to the strains of smash songs such as Can The Can, 48 Crash, Glycerine Queen and Devil Gate Drive. But as her new four-CD box set, The Girl From Detroit City, proves, there are a whole host of other mightily intriguing tracks lurking down her leather jumpsuit.

Wild Thing (with Reg Presley) A real curio this one, and very much of its decade (the 1980s). On the pic-sleeve cover Quatro channels a Sheena Easton image, while the song sounds like it was orchestrated by members of the Human League. “I didn’t meet Elvis but I met and worked with Reg!” says Suzi.

Lipstick A brilliant stompalong mutant offshoot of Patti Smith’s version of Gloria, this was originally performed by Suzi on an episode of Minder. But as we read in the box-set sleevenotes, a subsequent appearance on Cheggers Plays Pop ‘was unable to propel the song into the charts’.

Desperado A terrifically understated Quatro vocal is the highlight of this version of The Eagles’ classic.

Stumblin’ In This countrified duet with Smokie’s Chris Norman remains a guilty pleasure. “Million-seller in America at last,” says Suzi. “The only problem was, my Dad started to do it in his set – street cred out the window.”

Glad All Over A cover of the old Dave Clark Five chestnut and perfectly suited the Suzi’s rollicking approach.

Does Your Mother Know An eyebrow-raising, bang-a-gong rendition of the Abba song, featuring a guest appearance by Sweet guitarist Andy Scott.

No choice Suzi says this is “one of the Top Five of songs I have written”. What do you reckon?

Strict Machine Suzi tackles Goldfrapp’s 2003 hit with aplomb. Check out the cheeky Can The Can reference at 2:29.

Rolling Stone The A-side of Suzi’s 1972 debut single for Mickie Most’s RAK Records, before she donned the rawhide and began hollerin’ like a (Daytona) demon. Suzi co-wrote the lyrics with Hot Chocolate frontman Errol Brown; Peter Frampton guests on guitar.

Your Mamma Won’t Like Me Sister Patti Quatro is singing the high notes on the chorus along with Suzi. This 1975 gem showcases a surprisingly funky style, somewhat reminiscent of Rufus.