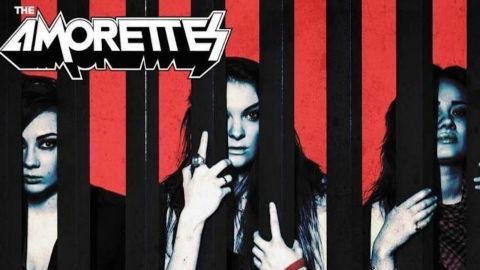 Long before you notice the “Produced by Luke Morley” credit, it’s clear that these three West Lothian lassies are bringing their A game. Seven years‘ experience welded to the sonic nous of the Thunderlord has taken things to a new level on their PledgeMusic-funded third album.

But this ain’t about the man at the faders – it’s all about the hellions sweating at the coal face. Second album Game On was good, but White Hot Heat is a game changer. Echoes of Getcha Rocks Off-era Def Leppard crash into no-frills rock’n’roll fury of Bon-era AC/DC and Slade-style gang vocals. Be still my beating heart.

From openers Batter Up and Let The Neighbours Call The Cops (co-written with Ricky Warwick), through the irresistibly witty Pervert Alert, White Russian Roulette and Man Meat, to the stonking finale Stealing Thunder (a riff that could stop a Tiger tank – the best I’ve heard all year), White Hot Heat is pure hook-driven overdrive. Resistance is futile.

The Amorettes release Let The Neighbours Call The Cops video

The Amorettes: Game On