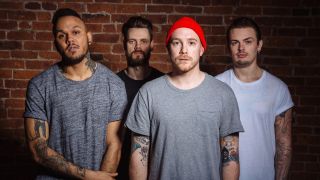 Like all good stories, Brawlers’ begins with a bet.

While working at the “worst, most boring day job imaginable”, guitarist Matt bet singer Harry an undisclosed sum that he couldn’t write a song that sounded like an amalgamation of their two favourite bands at the time – The Vaccines and the Ramones. Spurred on by the challenge, Harry wrote what would be their first song. Sensing something special, the pair were joined by bassist Anthony and drummer Pert – this lot don’t seem to do surnames – and Leeds-based Brawlers was born.

“I was in a brutal mosh metal band,” says Harry. “Matt was in the whingiest, softest indie band you can imagine and Ant was in a band called Castrovalva, a weird electro two-piece. The thing about us is, we aren’t the sum of our parts, there are no influences. I listen to what I listen to, they listen to what they listen to and we’re best friends, so it doesn’t matter. That’s how it works in our band – we all respect the fact we listen to very different music. When it comes to Brawlers, we just want to write good songs.”

The melting pot of their eclectic musical tastes has resulted in a band who seem to effortlessly knock out two-minute bursts of punk loaded with a pop sensibility. It’s helped, in part, by Harry who draws directly by everyday life; his lyrics are loaded with references to very personal experiences and even name-checks his friends.

“I have an incredible inability to use metaphors,” laughs Harry. “Every name check on the album is a real person, I can’t change their names. I just wouldn’t care [about people hearing], we have a song with the lyrics, ‘I still love you Annabel’. She was my first girlfriend, but that song isn’t about her; it’s about having an affectionate nostalgia for where you grew up. My favourite artists just say what has happened in their lives and there’s an honesty there. I like that. If I can’t say something, then the song should be able to.”

For example, they’ve taken a potshot at those who take everyone’s favourite photo sharing platform a little too seriously, on Instagram Famous; and they’ve perfectly conveyed that sense of regret following that boozy call you made on Drink & Dial. This sense of keeping it real stretches further than just their lyrics, though; it’s seeped into everything they do as a band.

“My favourite thing is that people are getting behind us,” says Harry. “A lot of people have taken a punt on us and we’re lucky enough to not have to worry about it being to a certain standard – we just have to be honest and do what we do. People tried to tell us what to do, but we’re the kind of guys that will just say ‘fuck you, then’…”

Their debut album Romantic Errors Of Our Youth will be released on the April 6 through Alcopop Records. For more information on the band, check out their Facebook page.