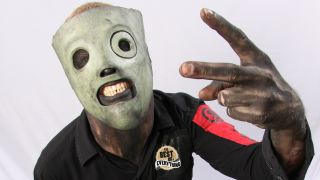 People say swearing is the sign of a small vocabulary. But that’s just a load of shit, isn’t it?

More often than not, nice words won’t get the point across and you’re forced to dip into the darker sections of your mind thesaurus for dramatic effect. Ever stood on a piece of Lego?

Of course, there’s a fucking time and a place for swearing. Bellowing a few choice words in the wrong setting can get you into a shitload of trouble. Like a church, or on telly before 9pm or even at your nephew’s first birthday party when you can’t get that bastard fucking balloon to stay in some sort of recognisable shape.

Slipknot frontman Corey Taylor knows the power of swearing and uses curse words like a Swiss Army knife in his lyrics, during interviews and in his books.

So with that in mind, you’d expect Slipknot’s back catalogue to be littered with swearing. And you’d be right. So we set ourselves a challenge. Pick the 10 best Slipknot songs which don’t have any curse words. We’ve been very strict with the language monitor too, so there’s none of the milder swears allowed either. So that means no Duality or Pulse Of The Maggots and you definitely won’t see AOV from .5: The Gray Chapter in our list either. Imagine hearing that one on daytime radio.

So, in no particular order, these are the 10 best Slipknot songs you can play at your aunt’s centenary celebrations without being chased out of the house and into the sea…

The lifeline running through Iowa is one of despair and hatred, full of bile, pus and blood in a toxic concoction of sickness. Lyrically, Corey lets out every demon and skeleton he has hidden away but instrumentally the other eight members shape the record into an image of vile corruption with its odd time signatures, creepy samples and brooding, bloodcurdling tones. This is captured perfectly in Skin Ticket, with its spiteful sounds and foreboding whispering intertwined with the fragmentary instrumentals. The snarling, raging “Keeping myself alive through your empathy” ricochets around the track like the death rattle of a man dying of contempt.

A song of empowerment and being who you are, regardless of what other people say. Slipknot have always been the embodiment of outsider culture and only in recent years have they been even slightly acknowledged by the so-called mainstream. The Blister Exists is a middle finger to those people who try to pinpoint and pigeonhole you with tags and names, when deep down you know exactly what you are, what you can do and how you’re going to do it. Also, if the dual drum-off between Clown and Chris doesn’t stir something in you and get you ready for war, then maybe metal isn’t for you.

Anyone with even a passing interest in the Iowan death machine will know this song, its anthemic, bellowing chorus and perhaps even the ‘unmasked’ video that accompanies it. Lyrically, besides the deafening gang vocal “I!” throughout the chorus, it’s about evolution and an admission of naivety when growing up, thinking you can take anyone on without consequence – “I am a world before I am a man” – not too dissimilar to the band’s own rise to prominence in their mid-20s. Fun fact: the beeping at the end of the song is ‘Slipknot’ in Morse Code.

Something on the less chaotic end of the spectrum now, with one of Slipknot’s acoustic ‘ballads’. As the Nine have grown older and wiser, the prominent emotions throughout records is no longer solely anger and aggression, but love and heartbreak – the latter in particular. Snuff is an ode to betrayal from someone you let in to your life that eventually does more harm than good, something that Taylor puts succinctly: “You sold me out to save yourself, and I won’t listen to your shame, you ran away, you’re all the same”.

Brooding, haunting and generally weird, Gently originally entered the metal lexicon through Mate. Feed. Kill. Repeat. but was resurrected as the ghostly mid-point in Iowa. Amidst the shimmering, nightmarish sounds floating in and out of the mix lies Corey’s distorted whispers that sound so bleak and desperate you’d think he was on death row. That is until his signature bark roars violently over the top adding layer upon layer of pain and passion to an already eerie, supernatural soundscape.

The song that directly follows Gently on Iowa also doesn’t contain any strong language, and is one of the best songs Slipknot have ever written – it also boasts one of their greatest and most subversive videos. As often stated the song is Corey’s homage to the time he spent homeless, sleeping rough, and the friends he made during that time. It’s not been an easy life for any of the men in Slipknot and its when these demons manifest themselves in music that the Nine really prove how good they can be. Sunshine and rainbows this is not.

That bell chiming and subsequent tormenting sample strike at the heart of what early Slipknot was all about – sounding as obscene as possible on their own terms with no regards for convention. Falling down the deepest, blackest rabbit hole Corey’s malevolent “Kill meeeeeee” drifts in before distorting into the ether. ‘Song’ is a loose term for Tattered And Torn; it’s a journey and an experience, not something you’d slot into a DJ set but it harnesses a real time and place for metal and alternative culture at the turn of the millennium. Fuck your rules, you made us this way.

Another song about love and all its horrible intricacies. The first of a two-part song, Vermilion is as much about obsession as it is about reciprocated feelings. Telling the tale of a stalker, through his eyes, its an insight into the depraved psyche of man watching from afar – “I get nervous, perverse, when I see her it’s worse” until it all becomes too much to handle despite his best efforts – “I won’t let this build up inside of me”. Of course, this isn’t something most of us can relate to, but the re-appropriation of lyrics is something on which us metal fans thrive – you know who this song is about in your head.

You’d think with a song title like that, the ‘Knot could cram a few swear words into the lyrics, but that would just be gratuitous. Taken from Slipknot’s magnum opus and arguably one of the most joyless albums albums in metal, New Abortion is dedicated to those fans who grew up with a lack of identity and no future for themselves thanks for the controlling powers that be, but you always be true to yourself by screaming the immortal line “You can’t take my soul away from me”.

Here it is, the big one. The song every metal fan knows off by heart and will lose their mind to at every rock club. It’s odd that a song essentially about suicide has become such a popular hit amongst rock fans of all ages and backgrounds, but such is Slipknot’s power to write powerful, emotive lyrics without resorting to pulverising, malicious music – although they’re good at that too. It’s the song that made metal fans around the world take notice of the masked marauders from Iowa and remains a setlist staple since its release 17 years ago. No wonder, really.